Grace and Teresa had an early start and were already on the way to the Poly pier when I jumped in. Leslie jumped in just after me. We all did our own thing with Leslie and I finding each other at the end of the swim at bouy 2. Leslie though she was going to get eaten by a shar... er, lifeguard. And we waved at our new swimmer whose name now escapes me (he didn't jump in today), but he is 88 and just got a new neoprene swim cap.

Flat and glassy water, my watch measured 59°F, but it felt colder with the overcast skies. East of the pier the water was a bit brown. West of the pier the water was clear, but the creek mouth smelled like not-ocean.
There was a whale hanging out with a massive bait ball about 1,000 yards off the piers.
We all met up at the showers, none of us with hot water.
Here is the video: https://youtu.be/74GpGwtSA5k 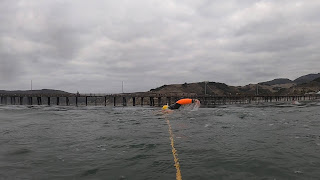 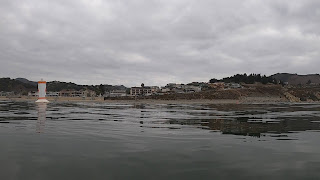 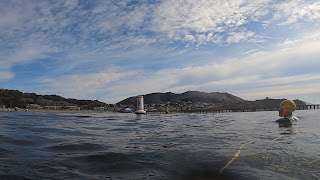 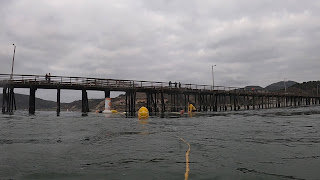 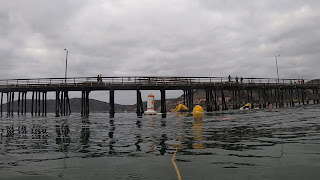 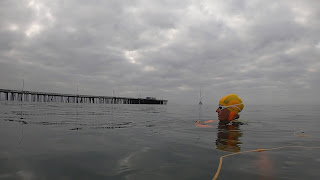 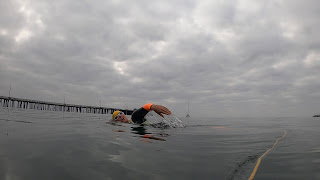 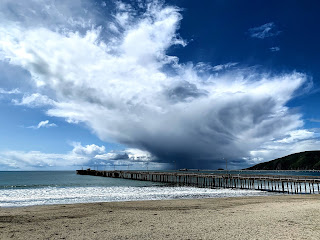 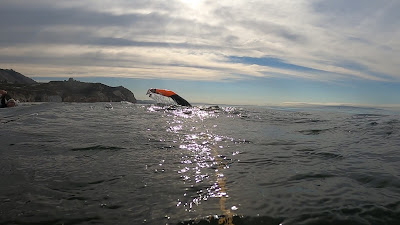 I'm going to be out of the water for a while. In the meantime we'll start with this one by Leslie.

Theresa and I had a wonderful long swim today that was marred by one absolutely disgusting event.    We were swimming out between the Avila and the cal poly pier and decided to check out all the cool boats out there, when we got to the first one, we smelled heavy raw sewage.  It was awful!! no way it wasn't from that boat and recently dumped, we were right there and saying how disgusting it was when the guy came out of the boat and looked sheepish according to Theresa..after the swim I drove to Harbor Patrol and reported it.  They said there probably wasn't much they can do after the fact, but they would go out there and have a discussion with him, if only to inform him that it is FREE to dump your tank there..
The boat is called the HONU and its from Sausalito.   If anyone runs across that guy feel free to let him have it.  I thought about taking our presidents advice and drinking a bottle of Chlorox or Lysol, but probably Pine Sol would taste better.
I'll tell you our route, it was perfect conditions today, flat, warm, clear, sunny and no problems from the marine animals.    We also had a Duke sighting before we got in, its his first day back in the water since his arm injury and it was great to see him, he was swimming with Brittanys husband Chad.
We went out to the 4rth buoy at fossil point, to the end of Avila Pier, then over on the boat tour. the other 2 boats were fine, no smell and nice people on the 3rd who said hi to us.  Then we headed over to the creek buoy, back to first one, then back around the avila pier to 4th buoy at fossil point, from there we were feeling pretty good and the water was still flat and nice, so we did buoy sprints back to the pier and then took a warm down lap back to creek buoy and back under the pier to our home buoy and in.  No idea what kind of distance that was but we were in over an hour.
Just wanted everyone to be aware of the moron out there.
Leslie
Posted by Niel at 2:46 PM No comments: