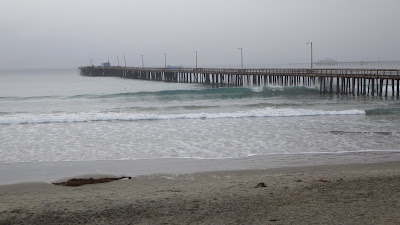 Avila Beach had grey skies with low clouds but no rain. The air temperature was 54, the water was 51, the surf was up since Thursday with the largest waves in the 4 to 5 foot range. The water was incredibly clear for Avila. The waves were translucent and when swimming the water was a beautiful blue green. 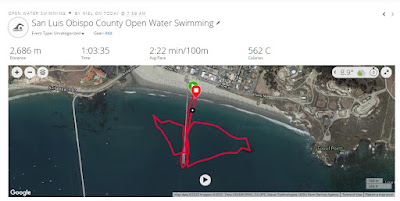 I was by myself and did a couple of triangles. The western was got a bit short and I did not take a shortcut under the pier. My  time seems slow but I clock from getting in to getting out without stopping the watch when treading water or taking photos, so the today's time reflects the fooling around I need to do to time my push through the surf. Actually that was twice because I went too early the first time and got pushed back in. 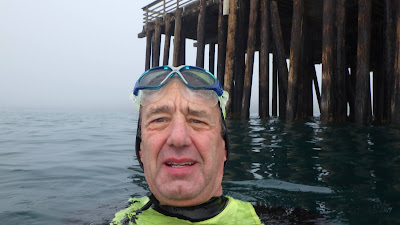 At the end of the Avila Pier.
Duke is spending the weekend with his family and won't be swimming tomorrow morning so I can start later than our usual 7:30. I'll get in at 8.
niel
Posted by Niel at 11:09 AM