I got in a bit after 9 and Leslie got in about 10 minutes later when I was arriving at the end of the pier.  She managed to chase me down and we completed the two triangles route I had planned.  The air temperature was about 55 and the water was 53 degrees. That doesn't sound like a big deal but the water temperature has been between 49 and 52 degrees since November 15th. The surf was 3 foot + and there was a lot of movement in the water outside the surfline with 3 different swells moving through. 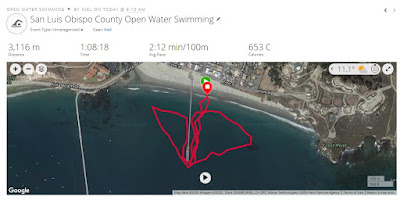 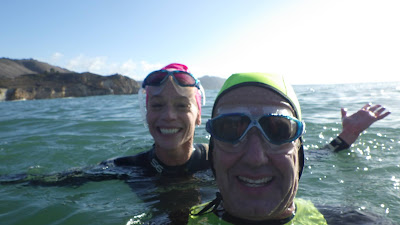 Leslie and Niel at the end of the Avila Pier

I'm going to swim Saturday morning at 8 and probably at 7:30 on sunday with Duke.