For the first swim of 2021 we had water with lots of movement. The largest waves were 6 to 8 feet but if you waited long enough there would be a lull when getting out was easier. Outside there was a mix of swells that were of different sizes and periods and directions making physical but fun swimming conditions. There was no chop so you didn't swallow any water, it was just a very messy surface.  The air temperature was 44 at 9AM and the water temperature was 52. 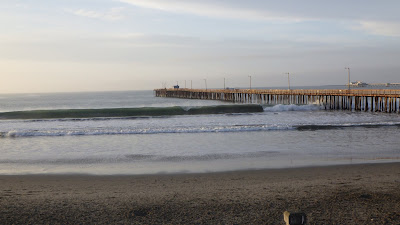 I actually was thinking of bailing on swimming by myself when Duke showed up. He was going to ride this morning but had a flat, which is time consuming to fix with tubeless tires, so he caught me in time and we both had someone to swim with. Duke suggested we swim down to off of Fossil Point and then to the end of the pier and see what looks good from there. 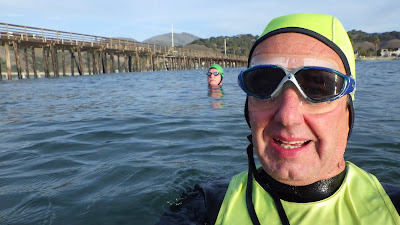 Duke and Niel out past the surf zone.
Getting out through the waves was not too rough but timing your start was critical. 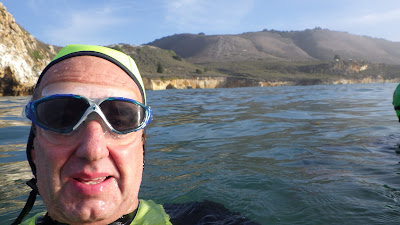 Niel and just a piece of Duke (sorry) off of Fossil Point. The water was really messy down here; this area is more exposed to swells that are wrapping around the breakwater at Port San Luis so it is always rougher and there were waves reflecting back off of the point meeting the incoming swells. 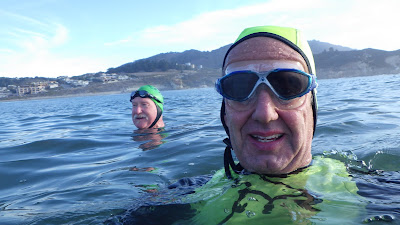 Duke and I at the end of the Avila Pier. We had had enough fun at this point and came in.
We were very lucky on our timing and were able to swim directly to shore without having to duck under any waves.
I saw Theresa, Elliot and Grace when I was at the showers. They had had trouble getting out through the waves and had bailed on swimming at Avila.
I'll meet Duke tomorrow morning at 7:30 for an early swim. We'll decide to swim based on the conditions. Company is welcome.
niel