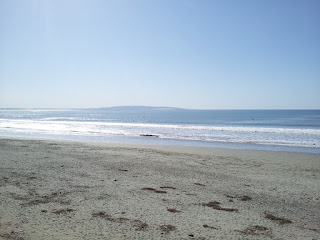 It was sunny, warm and windy at Avila today.  At 10 AM the breeze out of the NW had already put a chop on the surface.  The water looked clean and there were occasional 5+ foot waves.  Rob and I had a short debate out on the pier as to whether my thermometer read right on 50 degrees or was actually 49 and a fraction.  I've been in when it was 48 and 49 and wasn't going to be setting any personal records today so I was voting for 50 degrees.
Susan James was with us today as was Chad and Duke.  Rob is still getting over whatever it is that has kept him out of the water for the last week and he decided to be our beachmaster today.  We decided to start out along the buoy line to the left and to confer at the last buoy on the rest of the route.  Getting out was not as chilling as I had expected.  It did not feel any different from 52 or 53.   I had to dive under a series of waves on the way out and that both hurried up my getting completely wet and gave me something other than the water temperature to think about.  At the last buoy we decided to swim to the end of the pier and come in along the pier.  The leg to the pier was directly into the wind and chop and was a change from the pool like conditions we have been having.  Swimming got tougher when we got close to the end of the pier and became exposed to the full push of the wind and current.  The swim in was easier.  We got out 25 minutes after we started.
At the showers there was lots of warm water to share to take the edge off of the wind so everyone was smiling when we got back to our stuff on the sand.

Hey guys I have a water quality monitoring update for you all. For the last year I've been keeping up with the local Surfrider folks as they work towards improving water quality monitoring in the county. We recently had a small victory in that the county now shows the actual numbers from their testing as opposed to just pass/fail. When you go to the SLO County Ocean Water Monitoring Results Page you can click on various testing sites and get detailed information on water testing results.

Below I've included the test site at Avila Beach between the creek mouth and the pier. Can you spot the rain storm? 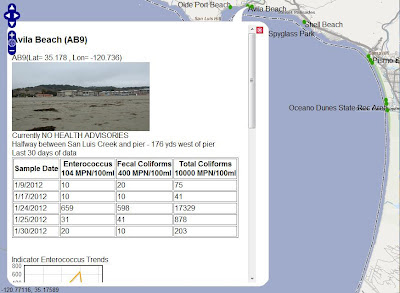 And this is why we call off swims when it rains after long dry periods!

Unfortunately as you can see the County only tests on Mondays, sometimes Tuesdays which doesn't do us a whole lot of good since we swim during the weekend. The SLO Surfrider chapter is working on setting up a lab in Avila where they can do their own testing to supplement what the County is already doing. It's not up and running yet but it sounds like they're almost there. If any of you would be interested in being sample takers let me know and I'll connect you with the Surfrider crew. Once everything is in place it'll give us some extra data that we can use to continue to make sure the water we're swimming in is clean and safe. I'll keep you guys updated as things progress. 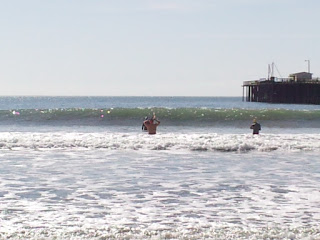 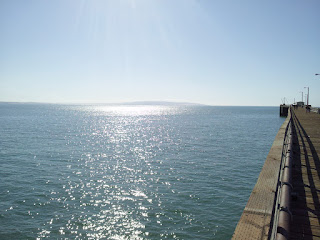 Avila was sunny, warmish and a bit windy today. There was a breeze out of the SW and a small, high frequency (real close together) chop and a west to east current. The water temperature was 53 and there were occasional sets of head high waves. The low sun angle and the chop made it difficult to look toward the ocean. Duke, Rob and Ed swam. Sylvia was comfortable in the sun and I my right shoulder is acting up again. The boys went straight out and turned left down the buoy line to the last buoy. They swam to the end of the pier, making a half-triangle and came in . Rob was towing his Go Pro video camera (mounted to a kickboard) and you can check out some video of today's swim here.

We had six swimmers today.  Niel, Duke, Sylvia, Ed, Amy, and Casey.  Conditions were just like last week, and for many weeks before.  Looking back, I measured a water temperature of 53 on December 4th and it has not been that high since.  In December and January of 2011 the water temperature was 54 and 55 degrees.  Our current weather pattern and the resulting cold ocean temperatures do not usually show up until April or May, so I have no idea what we will see this spring. 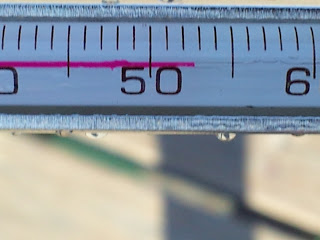 In any case, water temperature aside, the swimming conditions have been wonderful; flat and windless with clear water and small waves.  While these pictures may look like ones from previous posting I did take them today.  We have had two months of one beautiful Sunday after another at Avila and it is going to be a bit of a shock when real stormy winter weather finally returns . 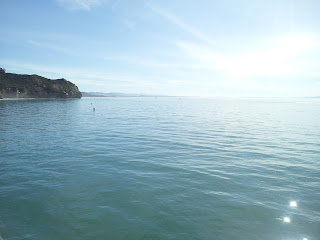 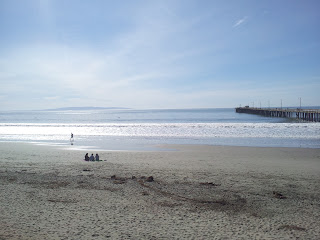 Four of us swam the triangle route clockwise today.  Sylvia swam the east side of the buoy line. Casey go in but was having unsolvable goggle problems so he bailed.  There were occasional larger sets of waves when we were getting out and I could feel the larger ones passing beneath me as I was swimming down the buoy line.  At these water temperatures no one felt like hanging out in the water and visiting so when we reached a turning point we waited just long enough for the group to gather up before heading out on the next leg.  I could feel an occasional push from the larger waves on the leg from the end of the pier back towards the creek.  When we finished at the pier there were some large waves coming through so we passed on crossing under the pier and swam in on the west side.  We were in the water for 39 minutes and covered 1-1/4 miles.