A Bit of Winter's Breath Today 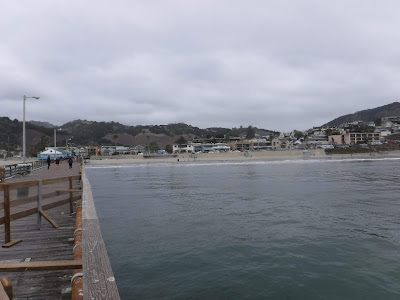 Sunday morning was gray with low clouds and much cooler temperatures than earlier in the week. The water at Avila was 56 degrees, flat and windless with no sign of the offshore winds that made last Sunday's swim so special. 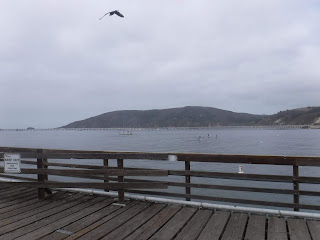 On the beach were Niel, Leslie, Augustine, Jonny, Evan, Jonny's brother who was visiting from Nova Scotia, John, Sue and Theresa. This would be Evan's first ocean swim.
We planned two or three routes and wound up with four.
Group B, John, Jonny and Evan, swam out to the end of the Avila Pier, west and around two moored boats, to the last buoy at the creek mouth and back to the pier for a distance of about 3/4's of a mile. Group A, everyone else, swam to the last buoy at the creek mouth and over to the second set of crossbars on the CalPoly Pier. I got there last. Leslie had waited and told me that the rest of the group had headed to the ocean end of the Cal Poly Pier and that she was cold and would return directly to the Avila Pier and get out. With the lack of sun the water was feeling more like the lower mid to low 50's. I couldn't see the group ahead of me along the length of the pier so I just headed to the end. Nobody was there so I swam to the end of the Avila Pier but hadn't caught up with the front group yet. They had gone on to the last buoy on the east side of the pier and back along the buoy line to our starting point and in, for a distance of 1.7 miles. About now the sun was coming out and I felt warmer so I decided to do some extra distance. I swam to the last buoy on the west side at the creek mouth and then the length of the buoys to the east end, back to the first buoy and got out. My watch said 2.4 miles and 1 hr. 25 min. when I got out but I forgot to stop the plot so there is some extra time and distance in map. 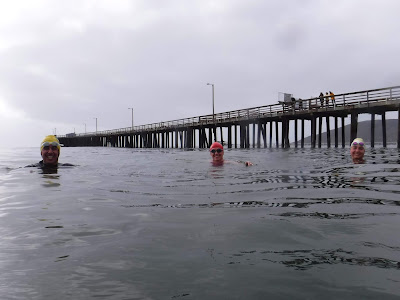 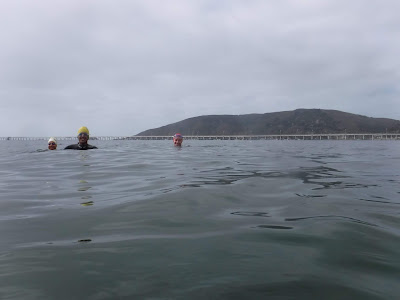 Theresa, Augustine and Sue at the last buoy at the mouth of the creek.
The CalPoly Pier is in the background. 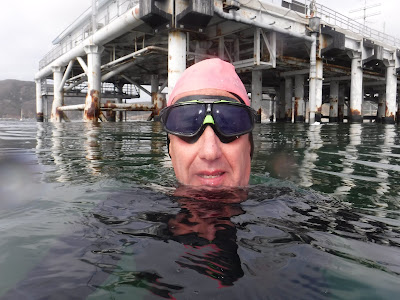 Niel at the end of the CalPoly Pier.
The water stayed flat and clean during my swim. 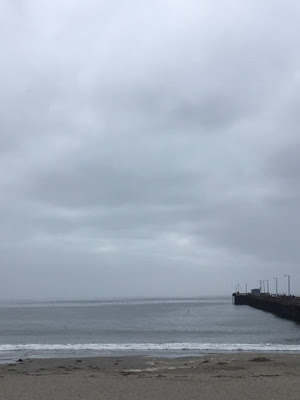 Leslie had gotten out and was headed to the hot tub at Kennedy but got
these shots of the clouds and the sun peaking out. 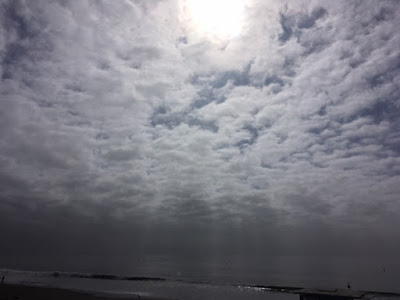 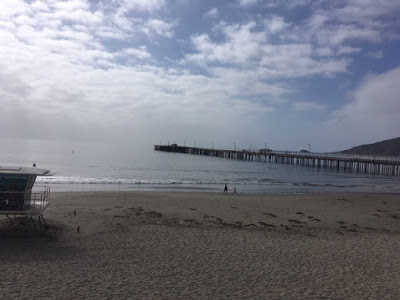 This was the last Sunday with the lifeguards and the swim line buoys, so we will be in full winter mode beginning in November.

Thanks to all of the guards and staff that work the summer season and help us stay safe in the water. 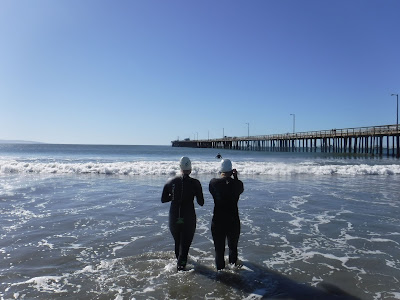 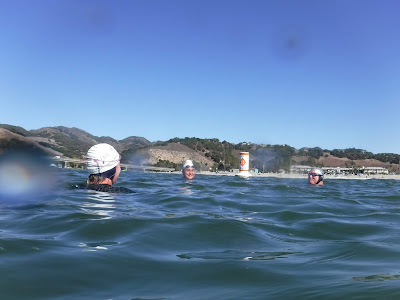 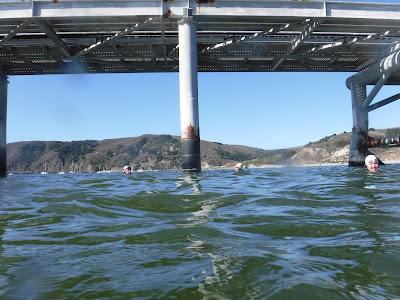 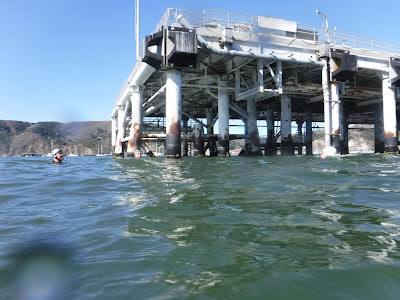 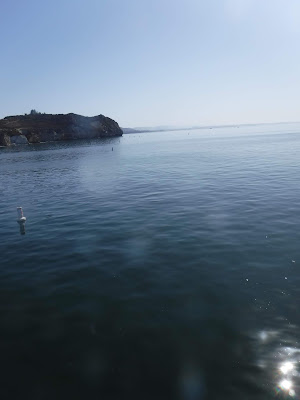 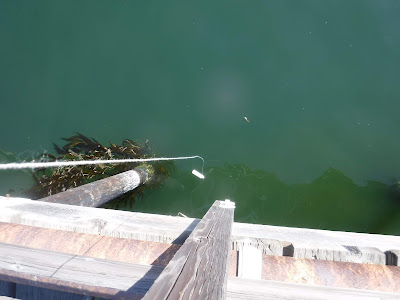 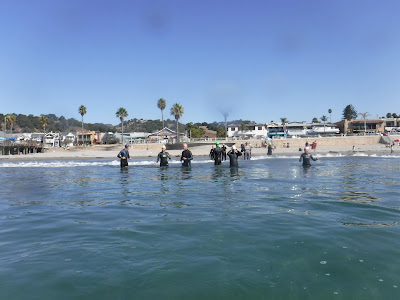 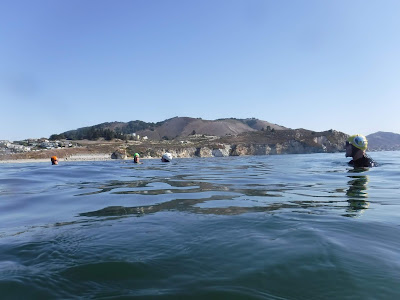 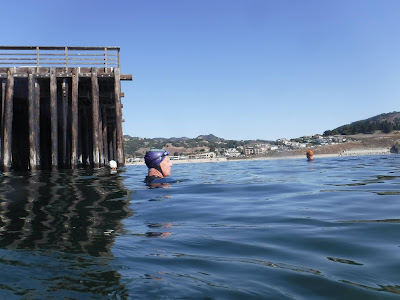 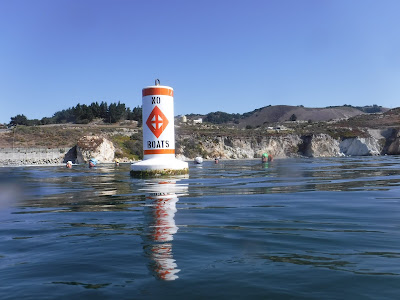 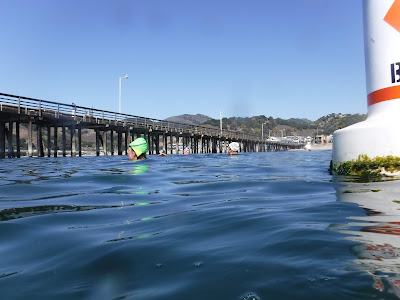 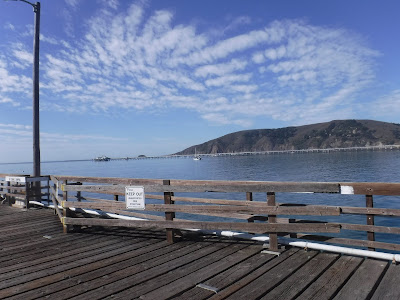 We had a beautiful fall day at Avila Beach and wonderful swimming conditions. It was comfortably warm and calm but not too hot with a flat and glassy ocean. The water was exceptionally clear for the Central Coast with visibility of 20'. The water temperature was 57 degrees.
We had two groups swimming today: Tom, Leslie and Niel went over to the Cal Poly Pier for a distance of 1.3 miles while Heidi, Amy, John, Jonny, Brenda and JoAnne swam the buoy line/end of the pier triangle for a mile+. 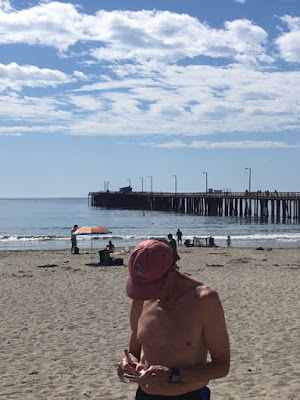 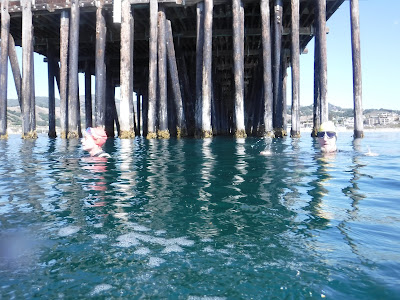 Leslie and Tom at the end of the Avila Pier 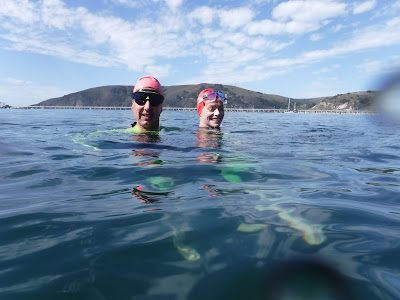 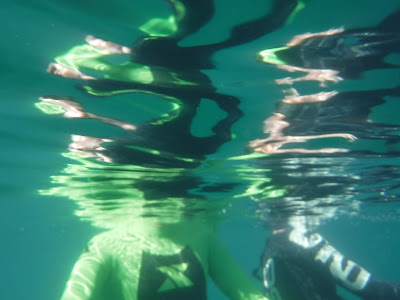 The water was unusually clear which allowed some fun photos. 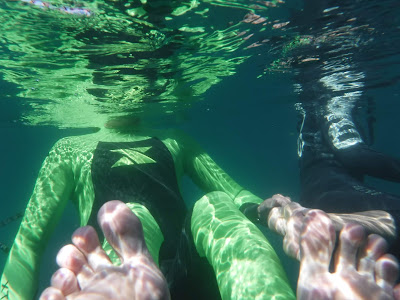 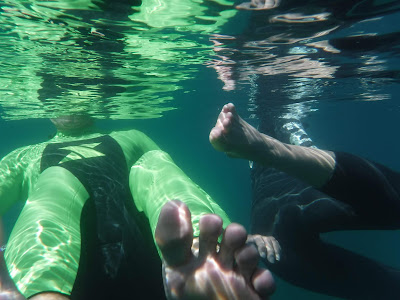 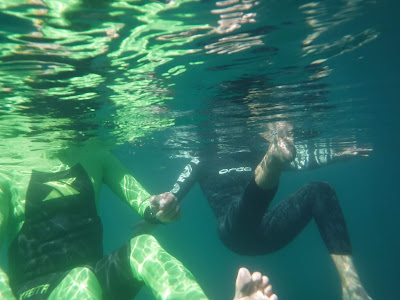 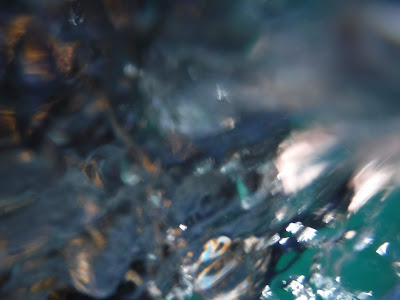 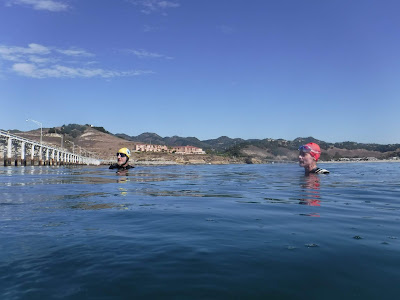 Tom and Leslie at the Cal Poly Pier before we headed back.

Around noon after we were back on the beach the wind picked up and messed up the water so we got the good conditions that day. 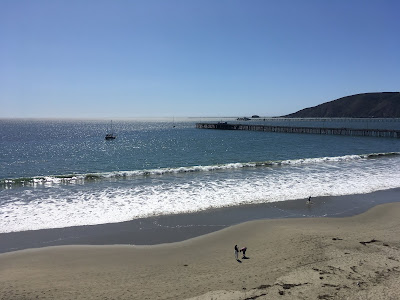