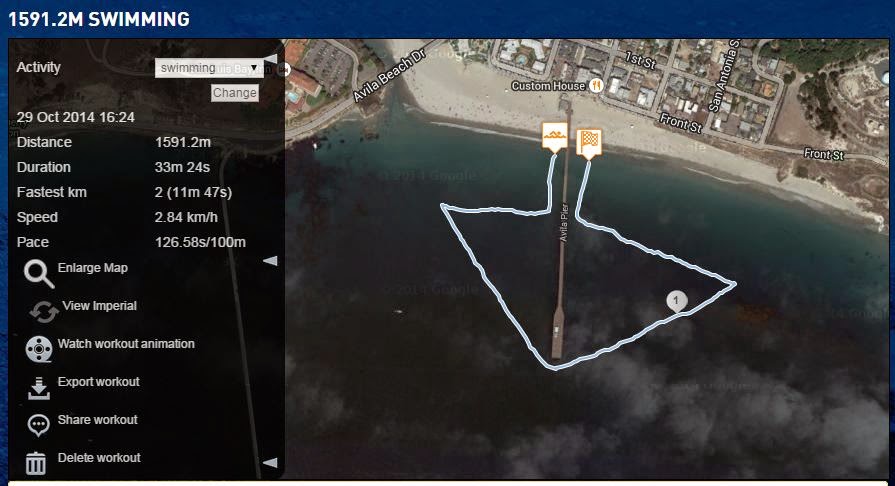 We had nice conditions for the last evening swim of the season.  Avila Beach was sunny with a slight breeze out of the SE. The water was nice and clear, with small surf and a temperature of 60 degrees.  Niel, Lloyd and Mark started on the west side of the pier, swam the buoy line to the creek mouth and then to the end of the pier. Mark headed in along the pier at this point while Niel and Lloyd completed the triangle.  The water was several degrees colder on the east side of the pier.  We watched a beautiful sunset while we packed up.  It will be just Sunday's now until Daylight Savings Time returns. 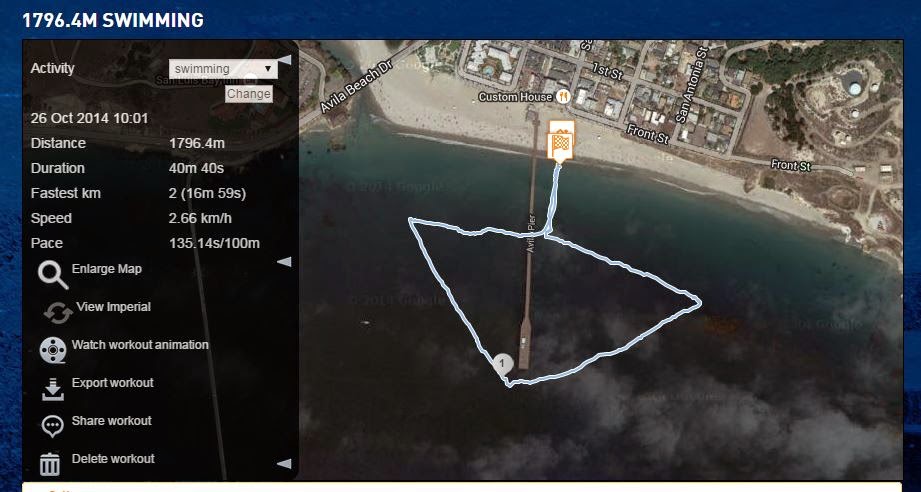 Avila was the standout place to be today.  The wind which was so strong in San Luis Obispo and along the coast was just a mile offshore breeze in Avila giving us excellent swimming conditions.  The water was 60 degrees and there were occasional sets of head high waves but there were long breaks between the big sets so getting in and out was just a matter of timing. We had a big crowd today featuring some familiar faces that had not been at the beach in awhile.  Big Steve Snyder, the original Avila Dolphins Beach Master and Paula Dooley joined Sylvia, Niel, Rick, Rhonda (not swimming), Amy, Dale, Tom Lorish, James, Stephen, Mary Jane, Ali and Pete Kelly. We all went out to the first buoy and down the line to the left.  At this point we split up into a group that was going to swim back along the length of the buoy line to the creek and another that was going to the end of the pier and then to the last buoy at the creek. Most of us managed to meet up at the creek before finishing off our swims.

This Wednesday, the 29th, will be the last evening swim of the season and next Sunday will be the end of Daylight Savings time so you will get to sleep in an additional hour before getting up to go to the beach. 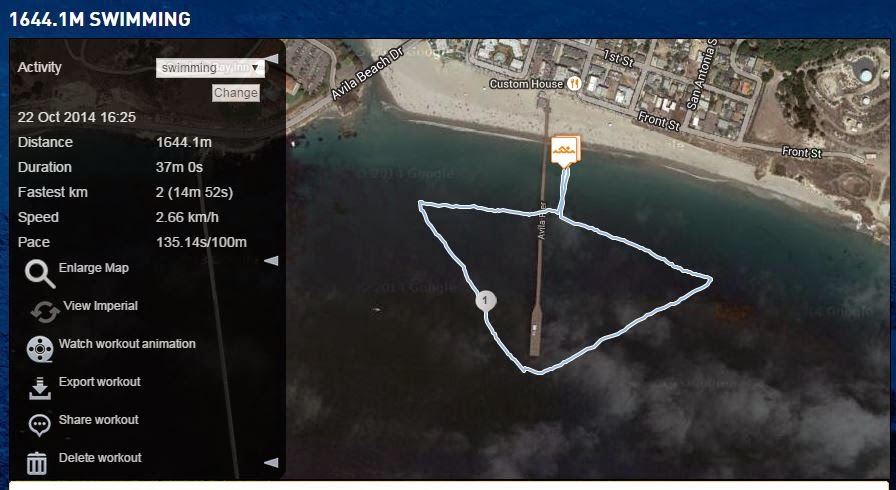 Avila was warm (warmer than San Luis Obispo) summ and breezy. The pier was still closed so I could not get a water temperature but the NOAA station over in the port was report 65 to 66 degrees. It might have been that warm at Avila.  Lloyd, Mark and Niel swam a clockwise triangle.  The swimming conditions were great and I was wonderful to be out in the water. 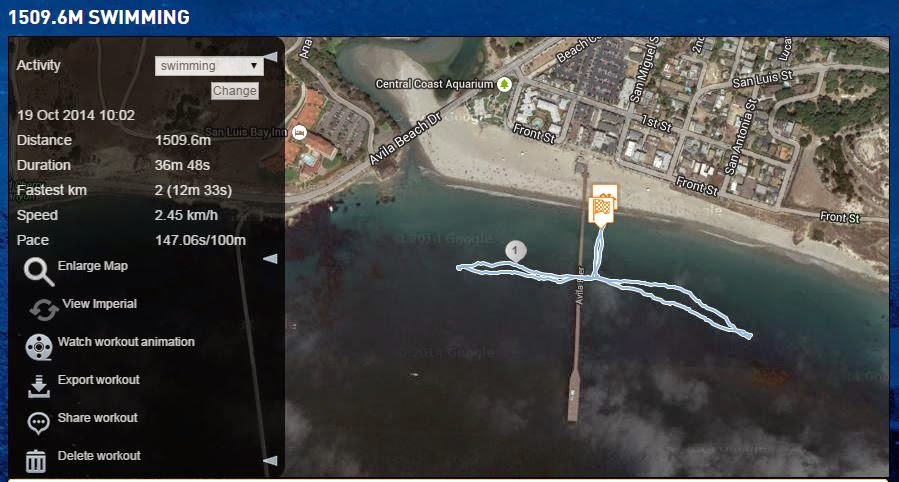 It was a beautiful day for swimming! The water was clean and 65.5 degrees!  A west wind was picking up so surface conditions were getting choppy.  There was some boat traffic and the Pali Kai Outrigger Canoe Club was out near the end of the pier so we decided to do variations on the buoy line. Yvonne did the left half.  Duke, Rick and Niel got out front with Amy, John Hampsey, Stephanie and Dale a little farther behind. Pete Kelly swam his own route.  There was no swell like last week but the chop was larger and swimming on the windward side of the pier was kind'a messy, but, it was warm and sunny and beautiful on the beach afterwards. Hard to complain for October. 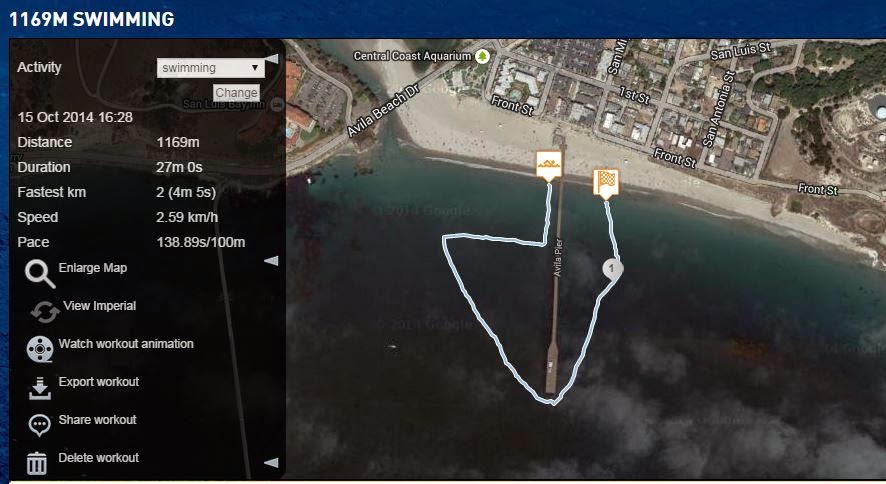 Niel, Sylvia, Mark and Yvonne swan this evening. The water was 64.5 degrees and choppy.  There was a wind out of the SW that was making the flags stand straight out.  We all started on the west side of the pier.  Sylvia and Yvonne did the buoy line while Mark and I swam a three legged course that got easier on each leg. 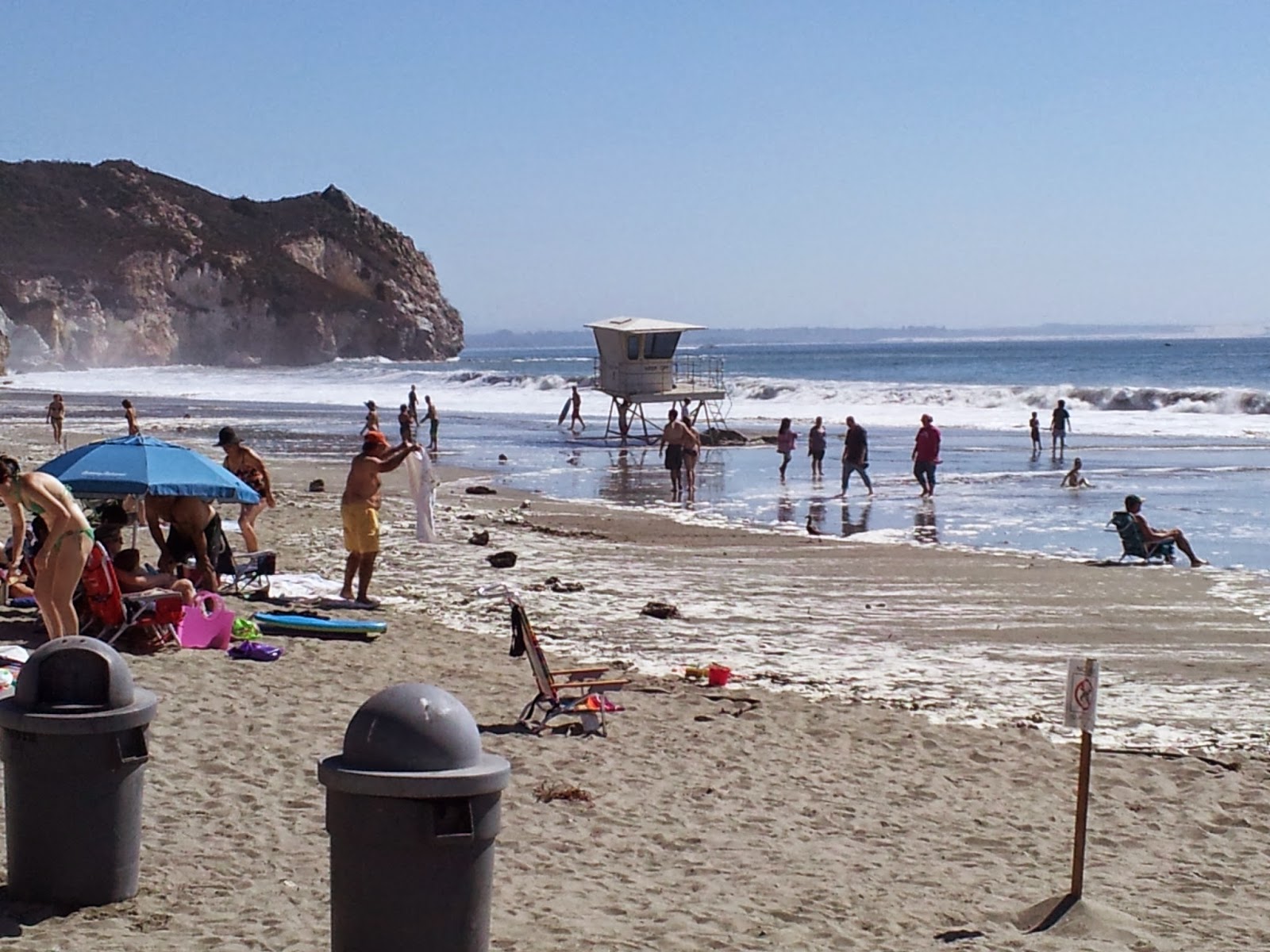 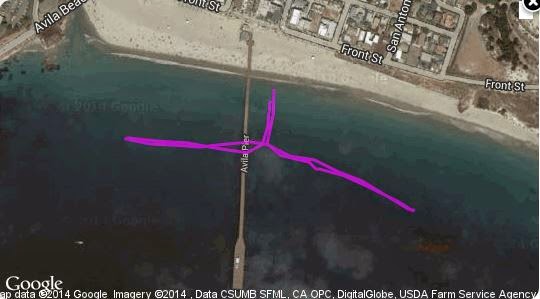 We have an abbreviated plot today because the FINIS website won't let me log in and pull up all of the data.
Avila was sunny and warm, but cooler than San Luis Obispo. I actually did not need the umbrella that I brought. The water was 60 degrees, nice and clear with an occasional wave that was large enough to bodysurf. There was no wind.  It is hard to remember that it is October.
Swimming today were NIel, Amy, John Hampsey, Jon Harmse, Sylvia, Dale, Ali and a friend, Gerry Gross and a new swimmer who I met but did not retain his name. There was a yachting event going on so we stayed in close and swam along the buoy line.  A full lap is just under a mile.

Not too many Wednesday evening swims left but the one on the 8th should be a nice one.


Preparations for the Santa Cruz Will Swim For Food have begun.  This is a one mile swim around the Santa Cruz Muni Wharf on Saturday, December 13th.  The swim is a fundraiser for local Food Banks.  Swimmers raise pledges in recognition of their willingness to do a lap around the Santa Cruz Wharf in winter.  This is not a race.  Most of the swimmers wear wetsuits. The idea is to swim,. have fun and raise money for Food Banks.  The really cool accessory is a custom painted duck decoy that, for a financial consideration, you can paint  as you want and tow behind you during the swim.   Pledges can be made to a food bank in any location.  Last year Niel, Rob, Leslie and Ali raised a total of $1600 for the San Luis Obispo County Food Bank.

You can read about signing up for this years event at;
https://www.stayclassy.org/santa-cruz/events/will-swim-for-food-2014/e37835

and the Will Swim For Food page is;

Last year it was cold, silly and a lot of fun.  Ali and I are going again. Come join us, have fun and help feed the hungry..