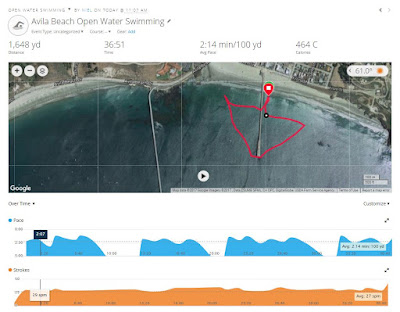 For the last swim of 2017 we had a wintery day at Avila Beach. It was cool with thin high overcase which took all of the warmth out of the sun and made the water look metallic and opaque. This, combined with a light breeze out of the SE, an empty beach and a water temperature of 53 to 55 degrees made a very end of the year experience. Niel, Maria, Tom, Leslie, Duke and Heidi swam today. We did a simple triangle route that came out to be just short of a mile. 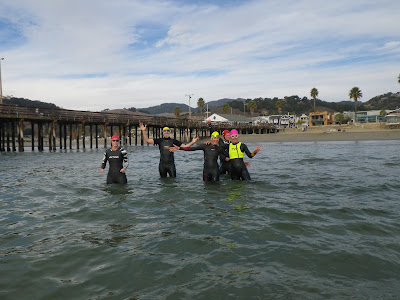 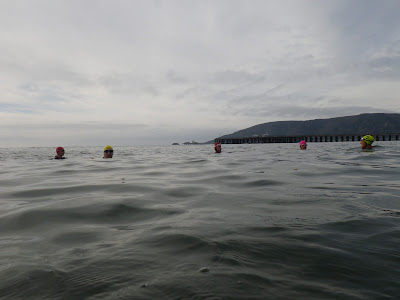 Heidi, Tom, Duke, Leslie and Maria at the end of the first leg 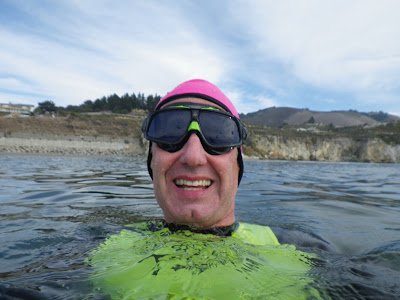 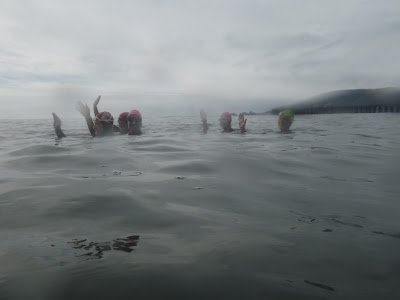 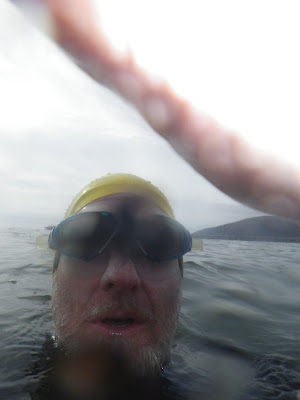 I've been using Rain-X to keep the water droplets from clinging to the camera's lense and messing up the photos but it is only working for part of the swim, as demonstrated by the difference between the first three and last three photos. Does anyone have a suggestion with something that will work better? 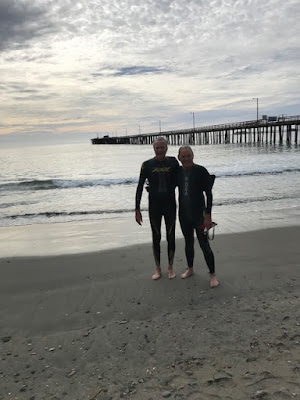 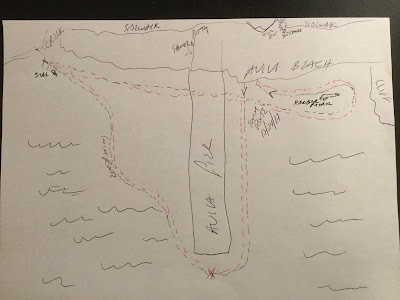 We had 12 swimmers today; Heidi, Hillary, Niel, Sydney, Sam, Karen, Sarah, Duke, Emily, Sarah, (were there two Sarahs or did I miss a name?) Jonny and John.

The water was 55 degrees, a little wind ruffled but very clear with great swimming conditions. 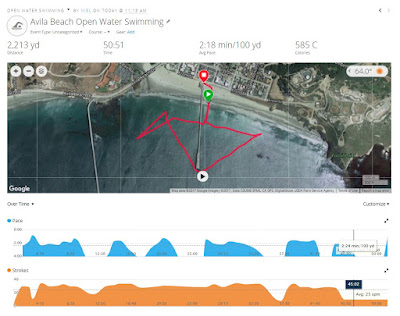 In spite of the plot we did a simple triangle today. 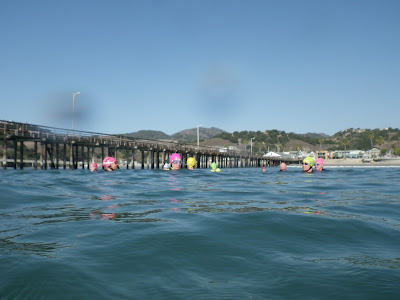 We looked like an Easter Egg Hunt when we formed up at the start. 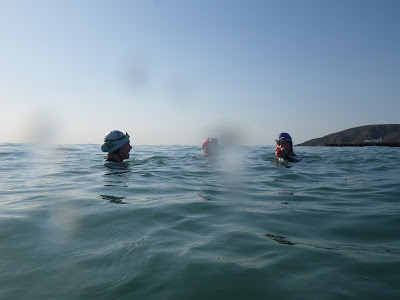 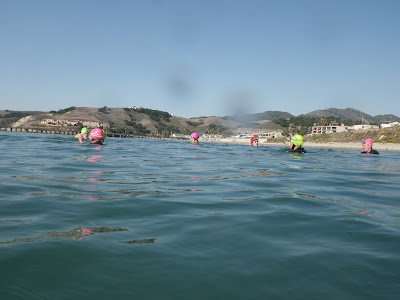 At the end of the first leg. 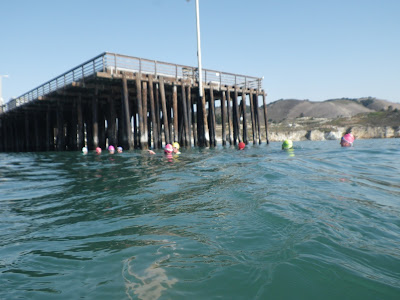 There will be a swim on the 24th. Several people will be out of town so the group may be thin. Maria is hoping to swim as are Sydney and Sam. 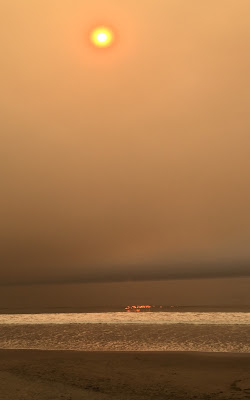 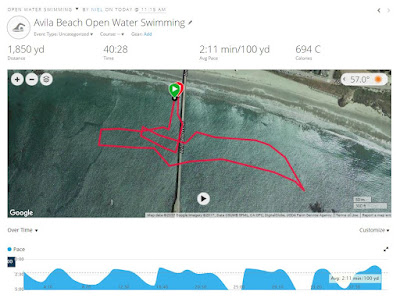 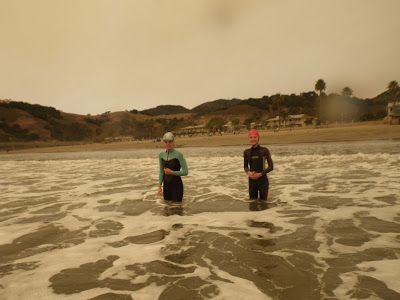 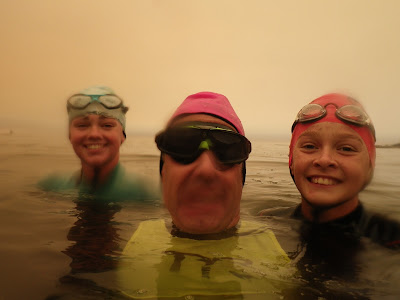 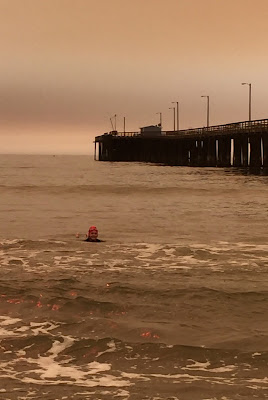 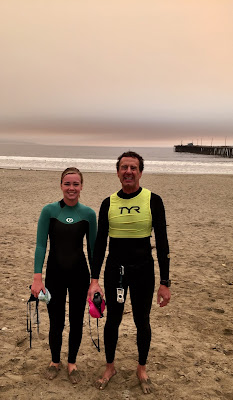 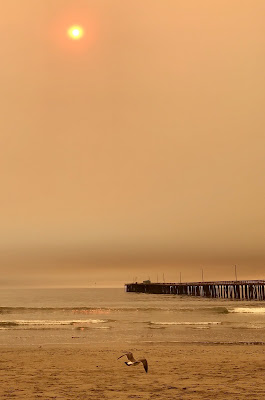 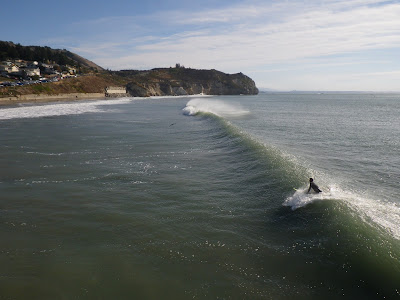 Plans were in place for us to do a supported 1.5 mile round trip swim out to the rock off of Fossil Point today but the weather had other plans. At sunrise Sunday morning the wind was blowing hard out ot the north. If Avila was sheltered enough some kind of a swim would be possible but the idea of going very far offshore looked chancy. I loaded up my swim stuff and kayak and headed to the beach. The wind was blowing offshore hard enough to make flags stand straight out and snap against their pole. The water temperature was 55 degrees. A swim out to the rock would feel like a quick half mile on the way out and a mile plus long slog into the wind and chop on the way back.
On the beach were Jonny, John, Hillary, Jim, Niel, Maria and Karen. Supporting us on kayaks were Hillary's son Emerson with his friends Bo and Brittany. We decided to get the boats and ourselves in the water and to swim out to the end of the Avila Pier where we would do an evaluation of the conditions and make swim plans accordingly. 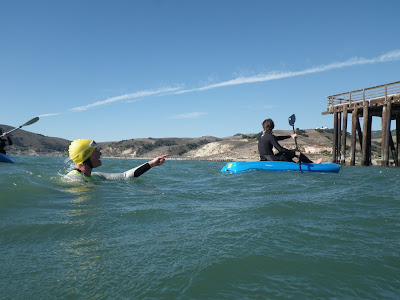 Hillary and Bo at the end of the Avila Pier. 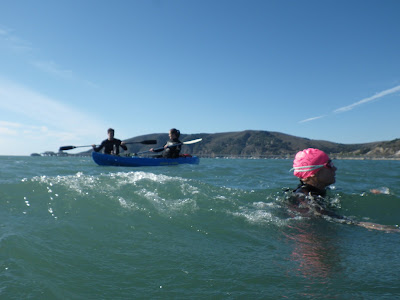 Emerson, Brittany and Karen at the end of the Avila Pier.

On the way out to the end of the Avila Pier I was thinking that I'd go to the rock but when I stopped and let the wind and chop catch up with me I changed my mind. Jim was the strongest swimmer in the water today and he decided to got to the rock with Emerson to keep him company.  The rest of us would swim over to the Cal Poly Pier and back to the shore at the Avila Pier with Bo and Brittany.  Our swim would be 1.2 miles as opposed to Jim's 1.5 but we would be swimming across the chop both ways instead of with and against for Jim's swim. There was no sign of the red tide that had been hanging around. The water was clear and a beautiful green color. 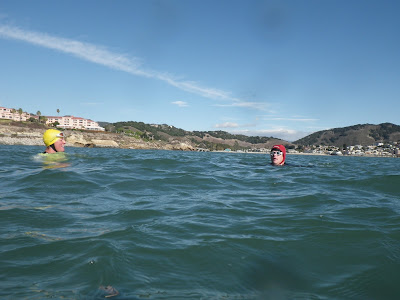 Hillary and Jonny at the Cal Poly Pier 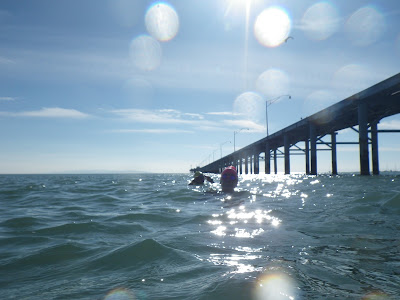 Maria and Karen at the Cal Poly PIer.
The end of the pier is 625M from here and makes a nice leg
(with lane lines!) as part of a longer swim. 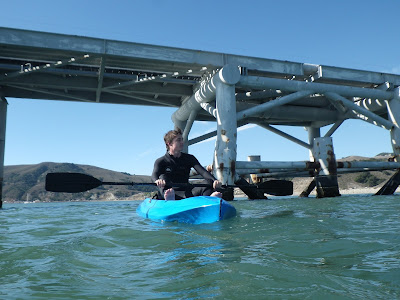 Bo at the Poly Pier. 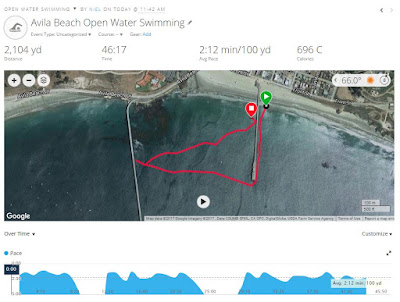 Jim and Emerson said that the leg back against the chop and wind required some extra effort. Well try to schedule another swim out to the rock this winter if the water temperature holds up.