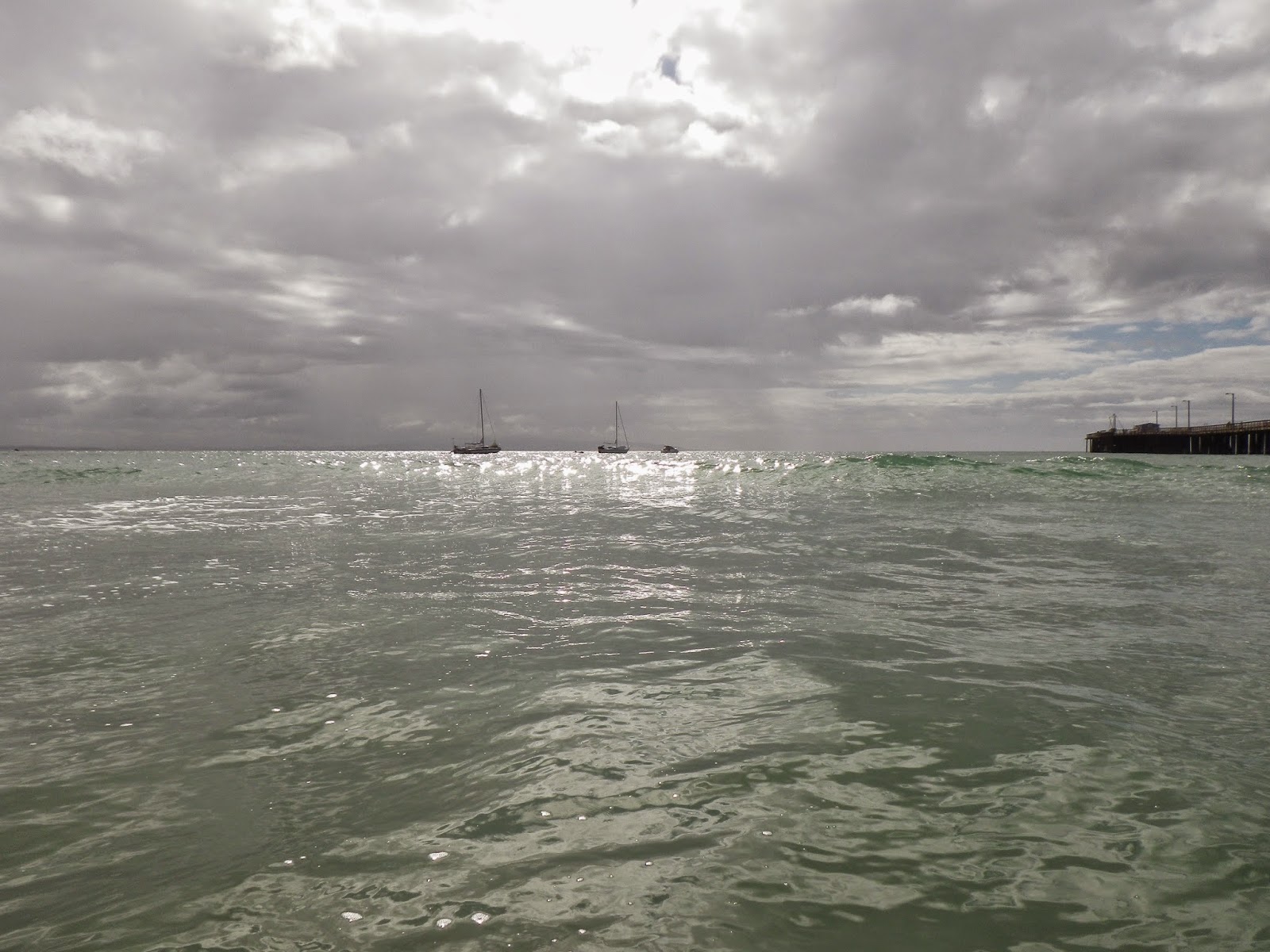 The air and water were 58 degrees. There had been some showers earlier but we did not get any rain while we were at the beach.  We had storm conditions; a steady wind and swell out of the south pushing towards the beach. Tom, Leslie, Niel and Erik swam.  Rick came by but he and Rhonda decided to join Duke and Angela for breakfast.  The water quality along the beach was OK Thursday but the creek had high numbers so we stayed on the east side of the pier.
Sylvia stayed out and rested on her 2014 National Masters Rankings.

She deserves a big congratulations from all of us!  She placed in the top 10 in all of her events AND her relay team is ranked No. 1 !
She is still kicking butts at 77 and has been top 10 ranked since 1984!  Nothing like setting a high standard for all of us younger folks who think we are hot stuff.

We swam out along the pier, angled towards the beach to the big rock at the end of the sea wall and came back to the pier. 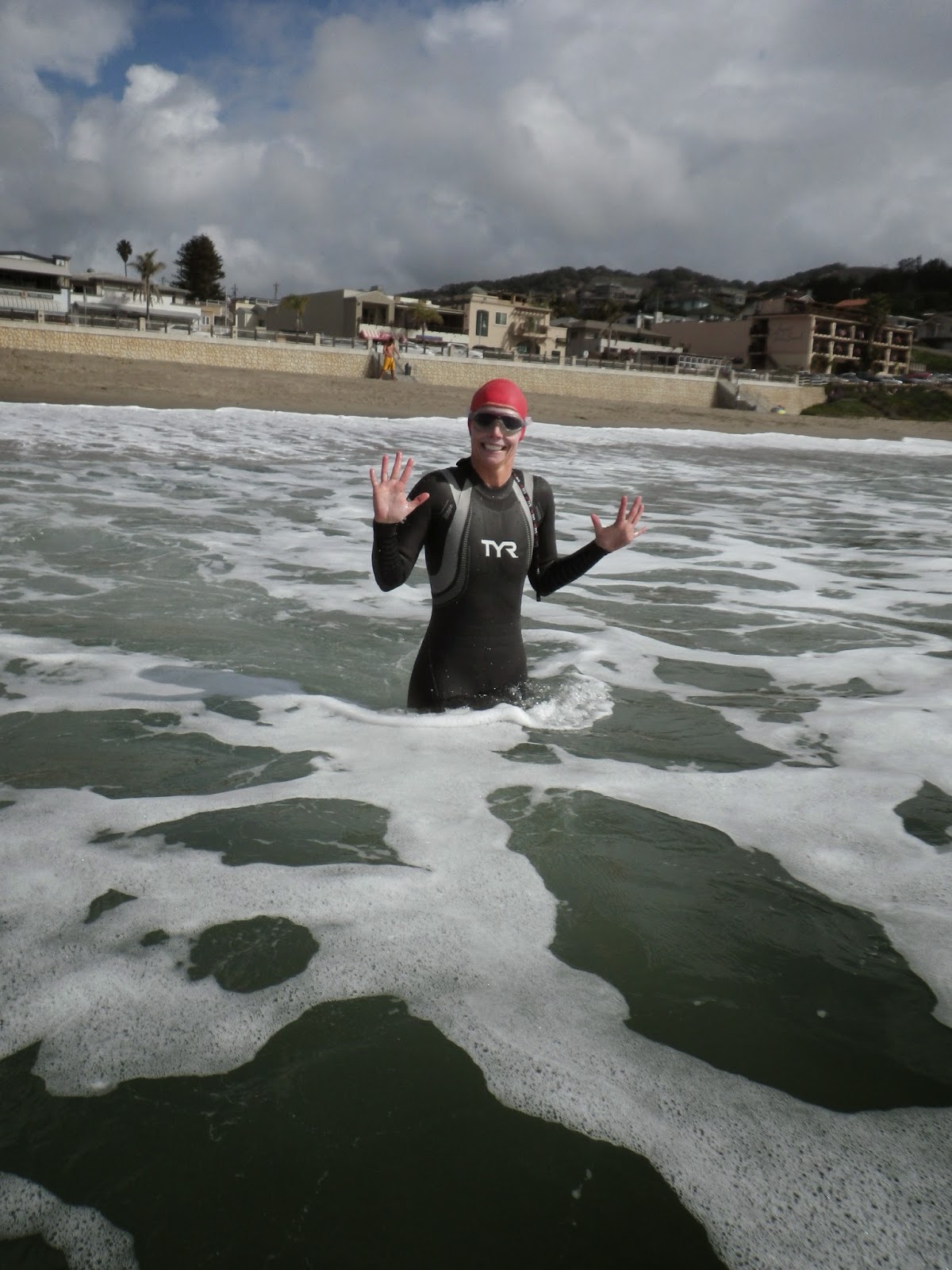 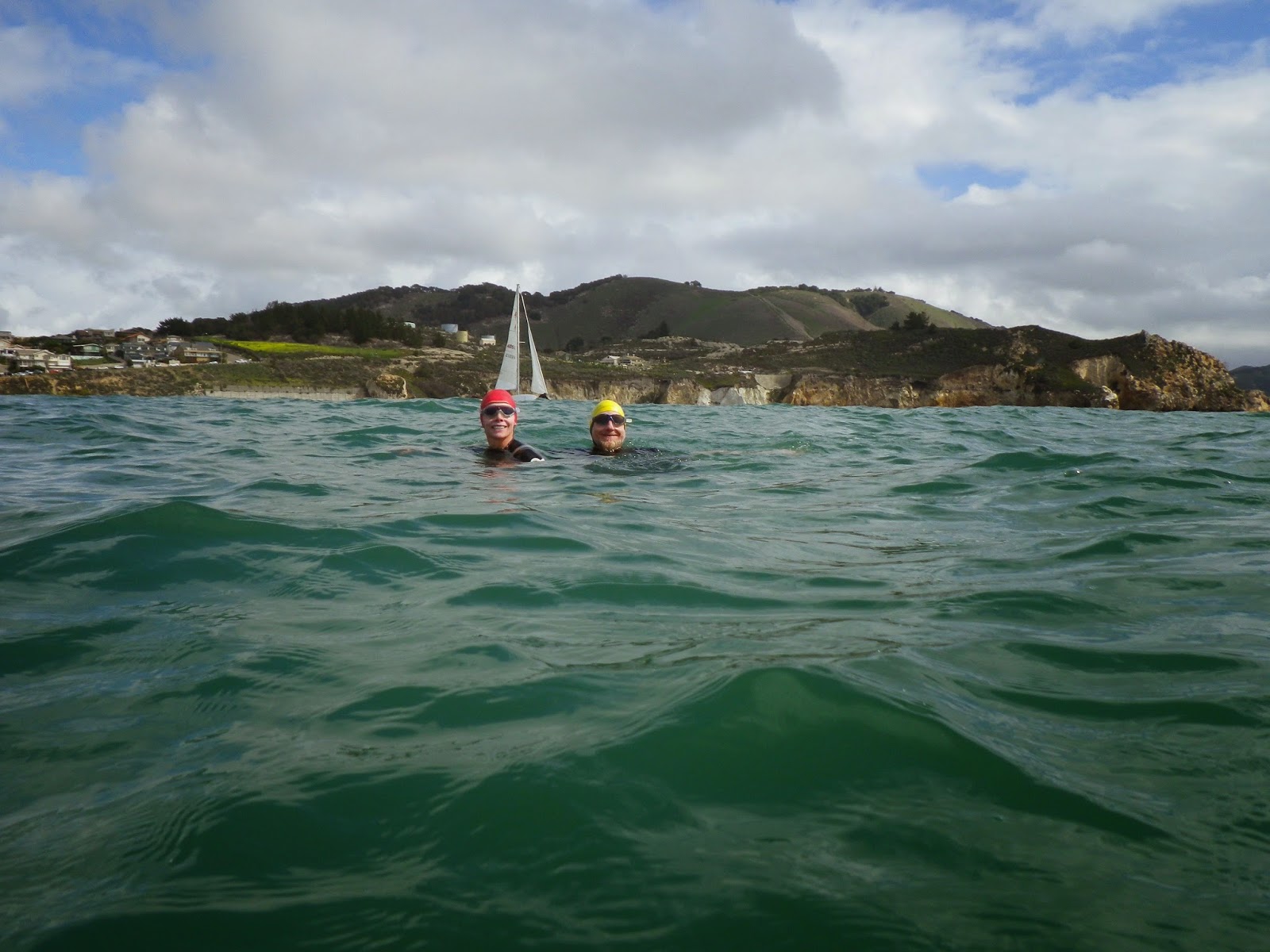 Leslie and Tom at the end of the pier 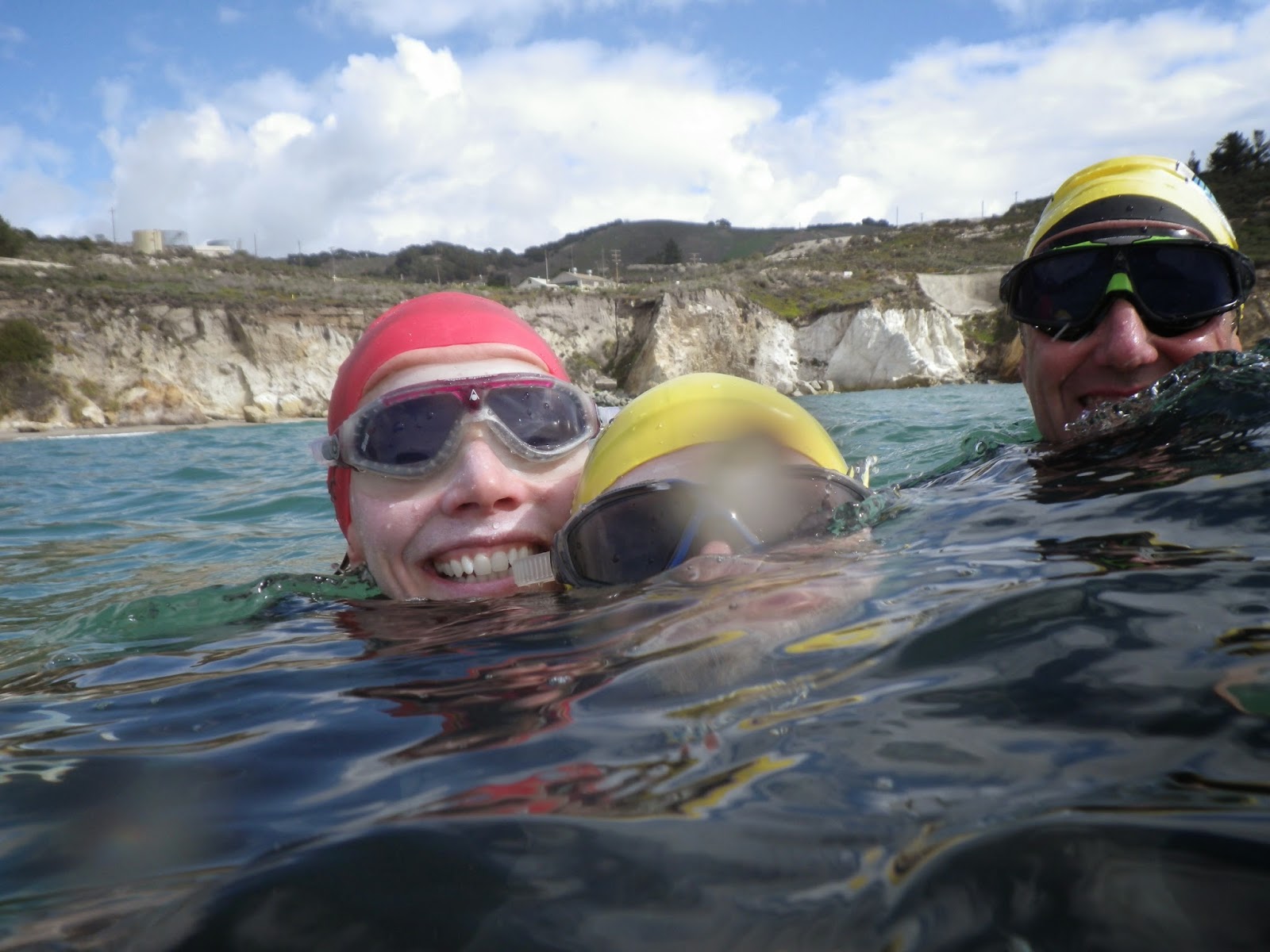 Leslie, a mystery swimmer and Niel at the end of the sea wall

Next Sunday Tom is busy, I'll be out of town and Sylvia will be competing in Pasadena. 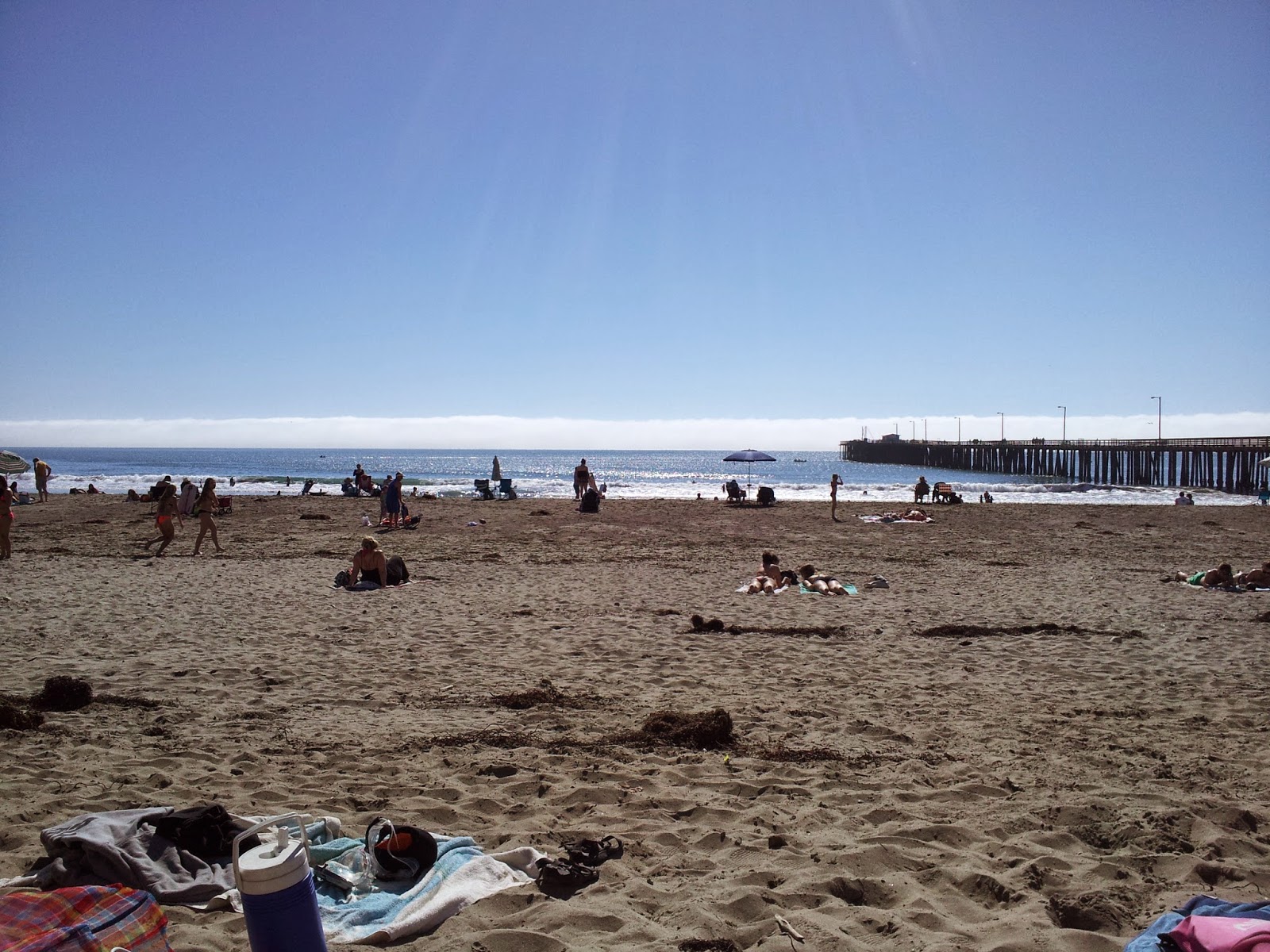 OK, I admit that it was bad of me, but I could not resist sending this photo to my nephew in Boston.
Yes, Avila Beach was showing off for the holiday weekend; sunny, windless, warm and 59 degree water.  The beach didn't seem to be that crowded but there was no parking to be found when I left at 1.
We had 10 swimmers today; Niel, Sylvia, John Hampsey, Amy, speedy Paula Dooley and her daughter Claire, who we don't see often enough, John Harmse, Roxy, Rick and Dale. Paula and Claire and Sylvia trunked it. 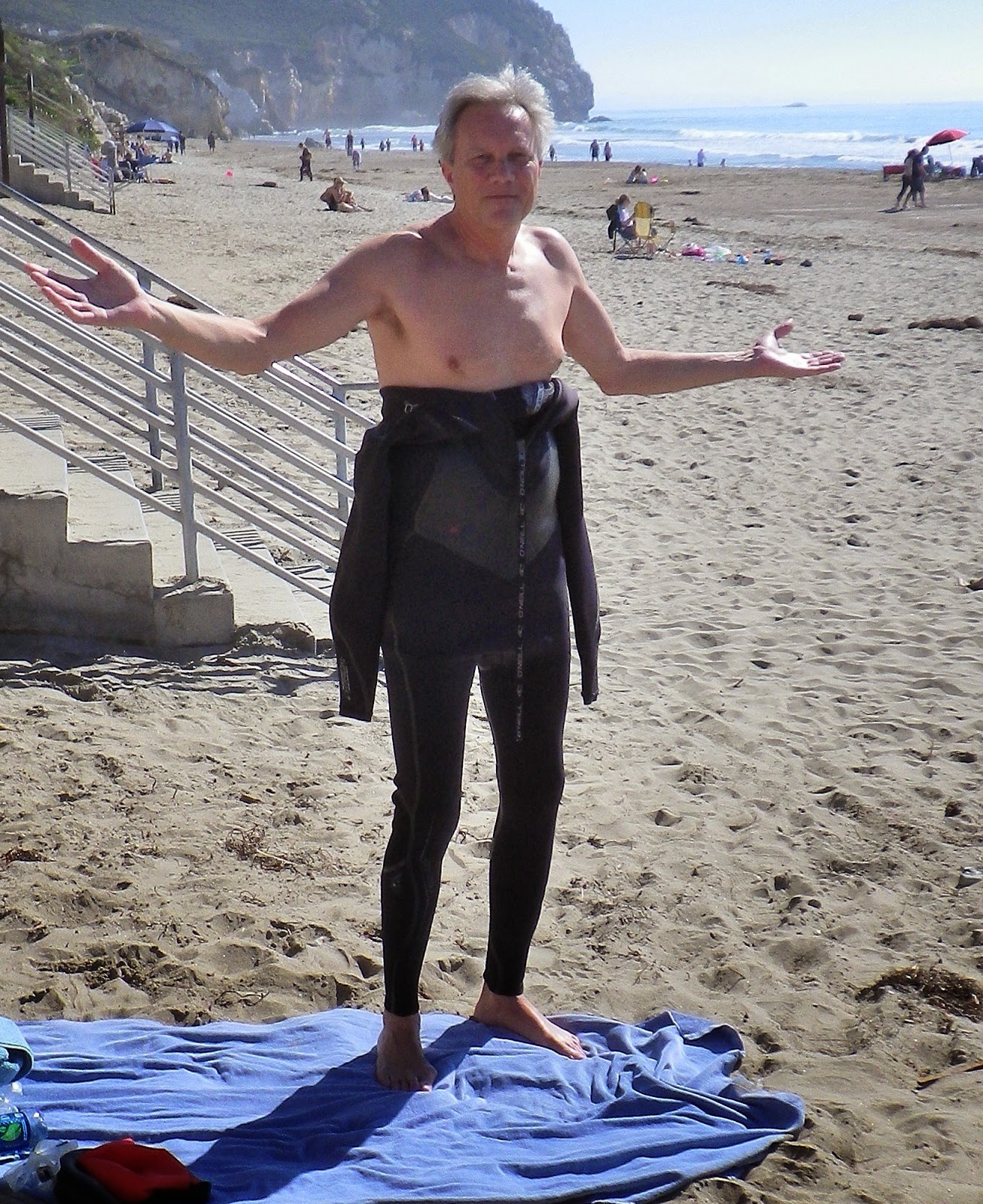 John began with a novel technique to putting on his wetsuit and had to rethink his approach.
We decided to do a clockwise triangle to give Paula and Claire a chance to get comfortable while we were close to shore.  At the end of the sea wall we all turned and headed to the end of the Avila Pier.   That is Paula and Claire, right and center. 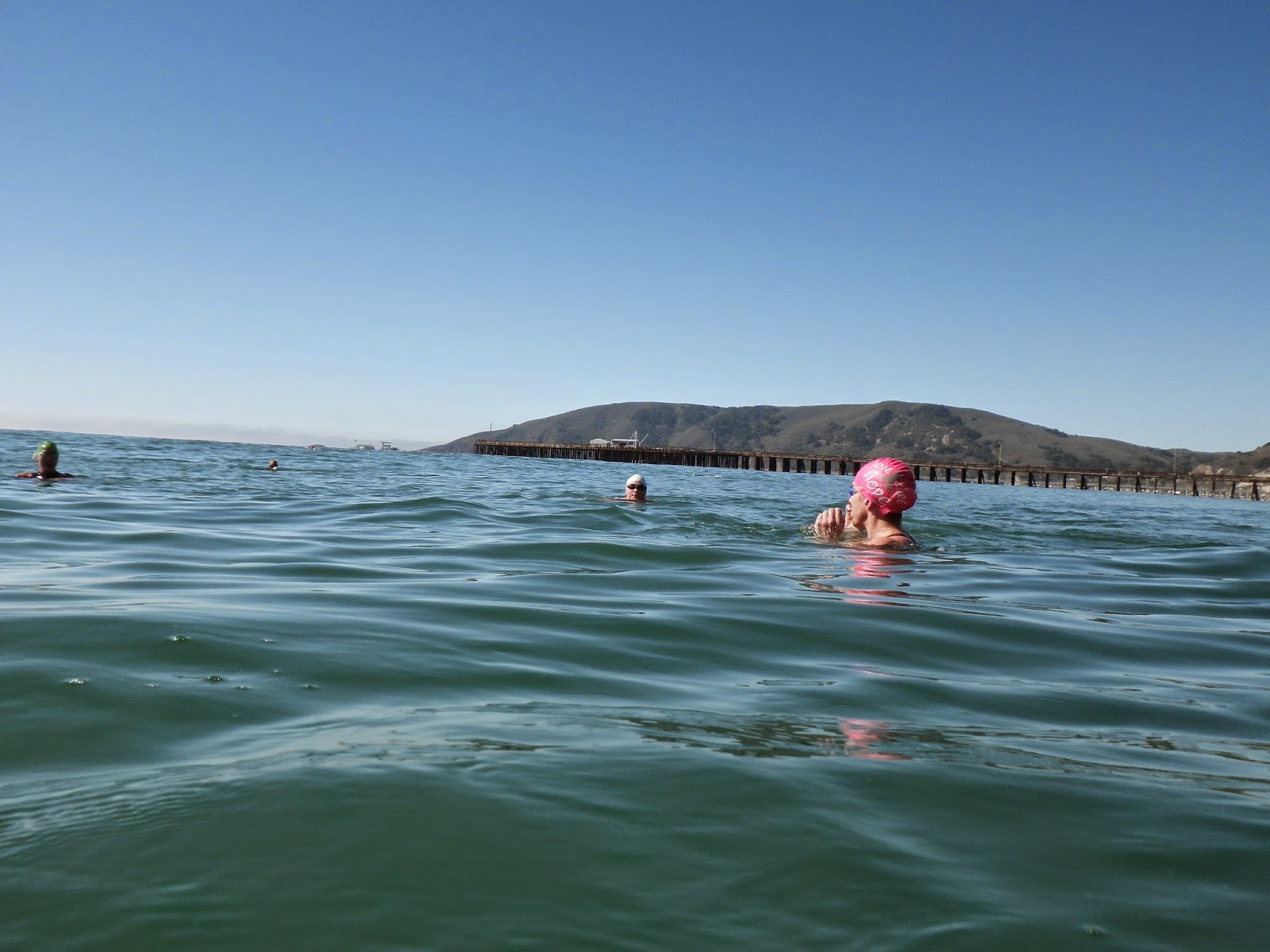 Paula, Claire, Dale and Roxy headed in from the end of the pier. The rest of us completed a short version of the creek side of the route.  The water was really nice, the sun was warm and we all had a great time. 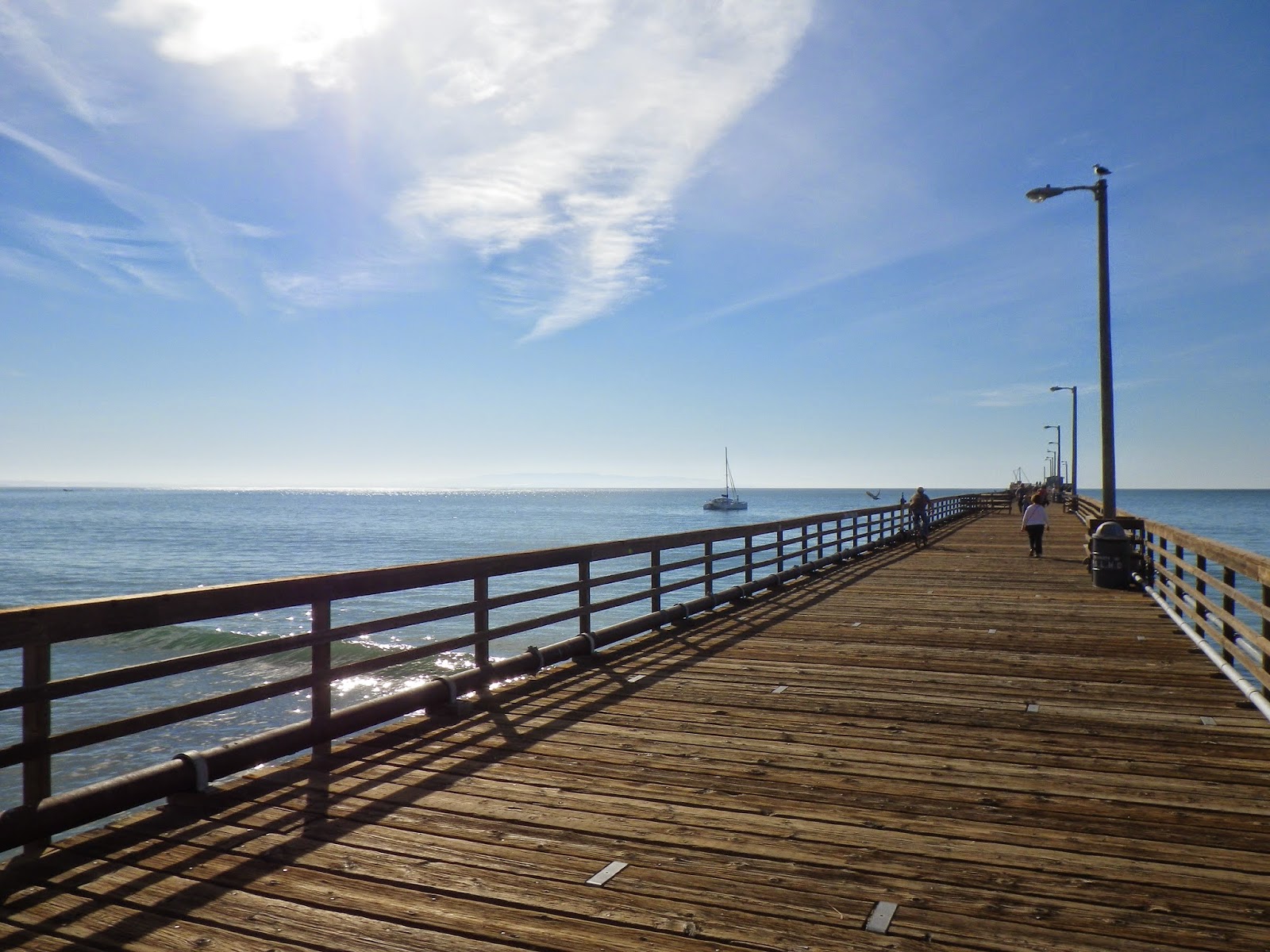 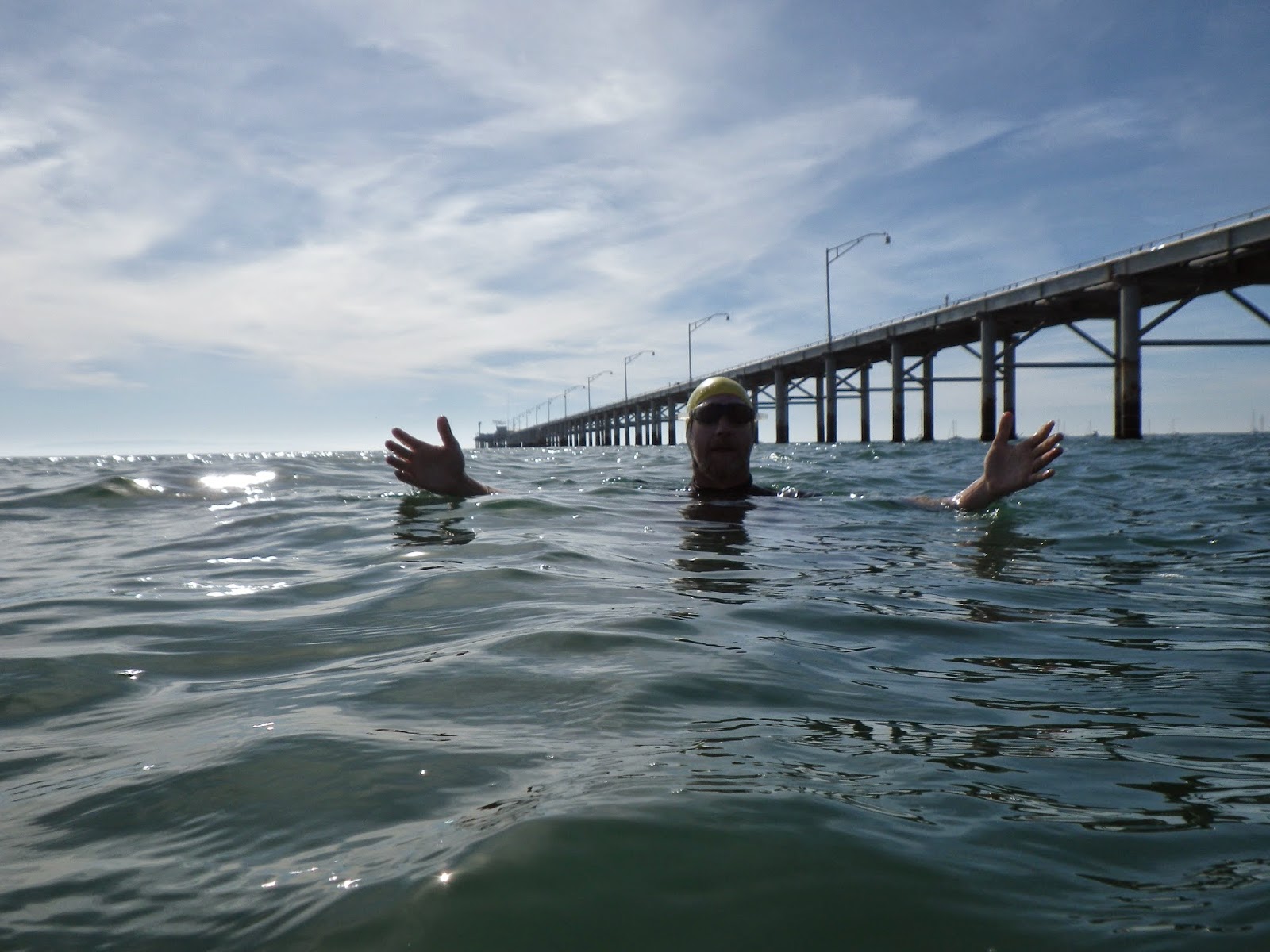 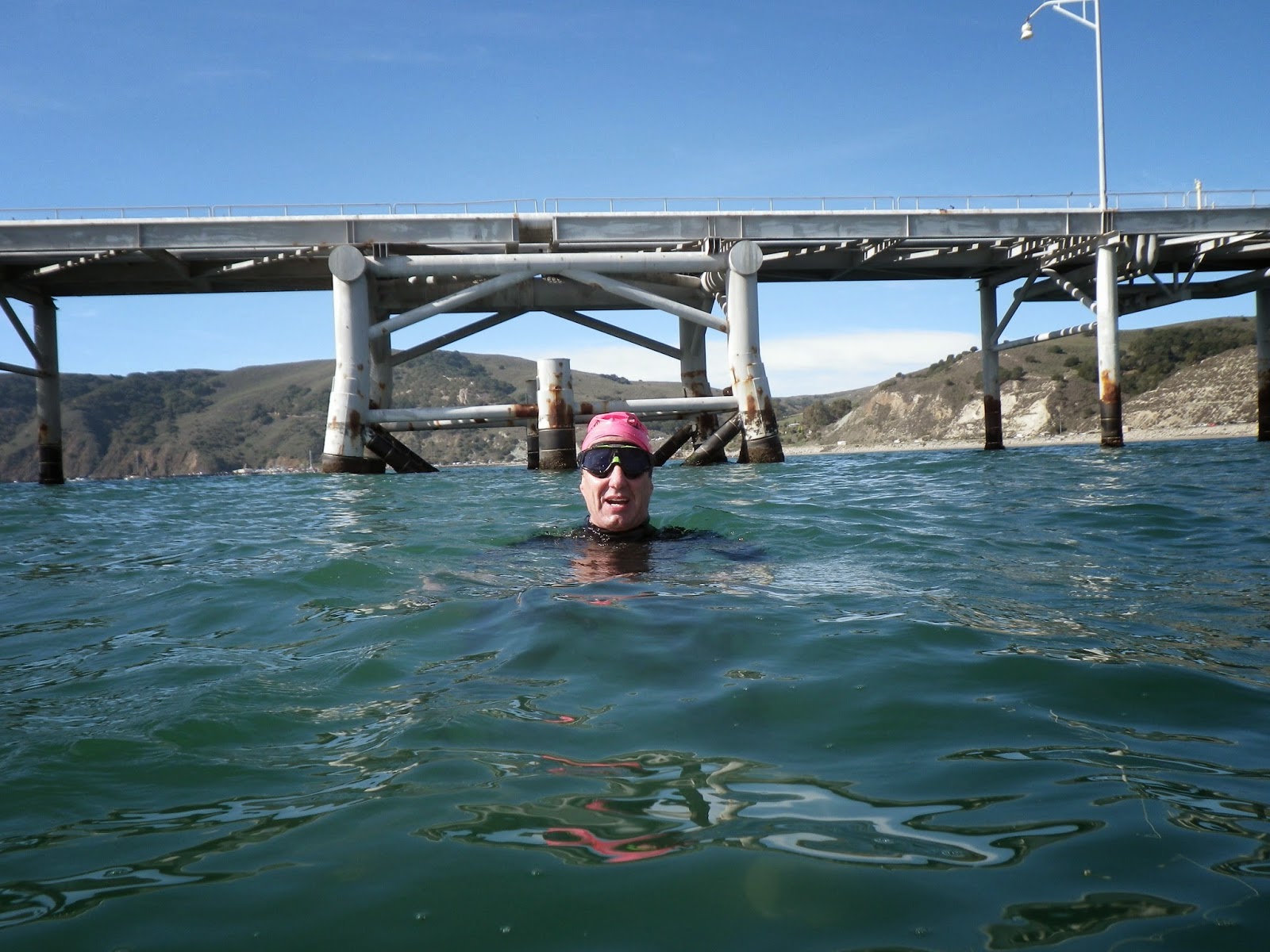