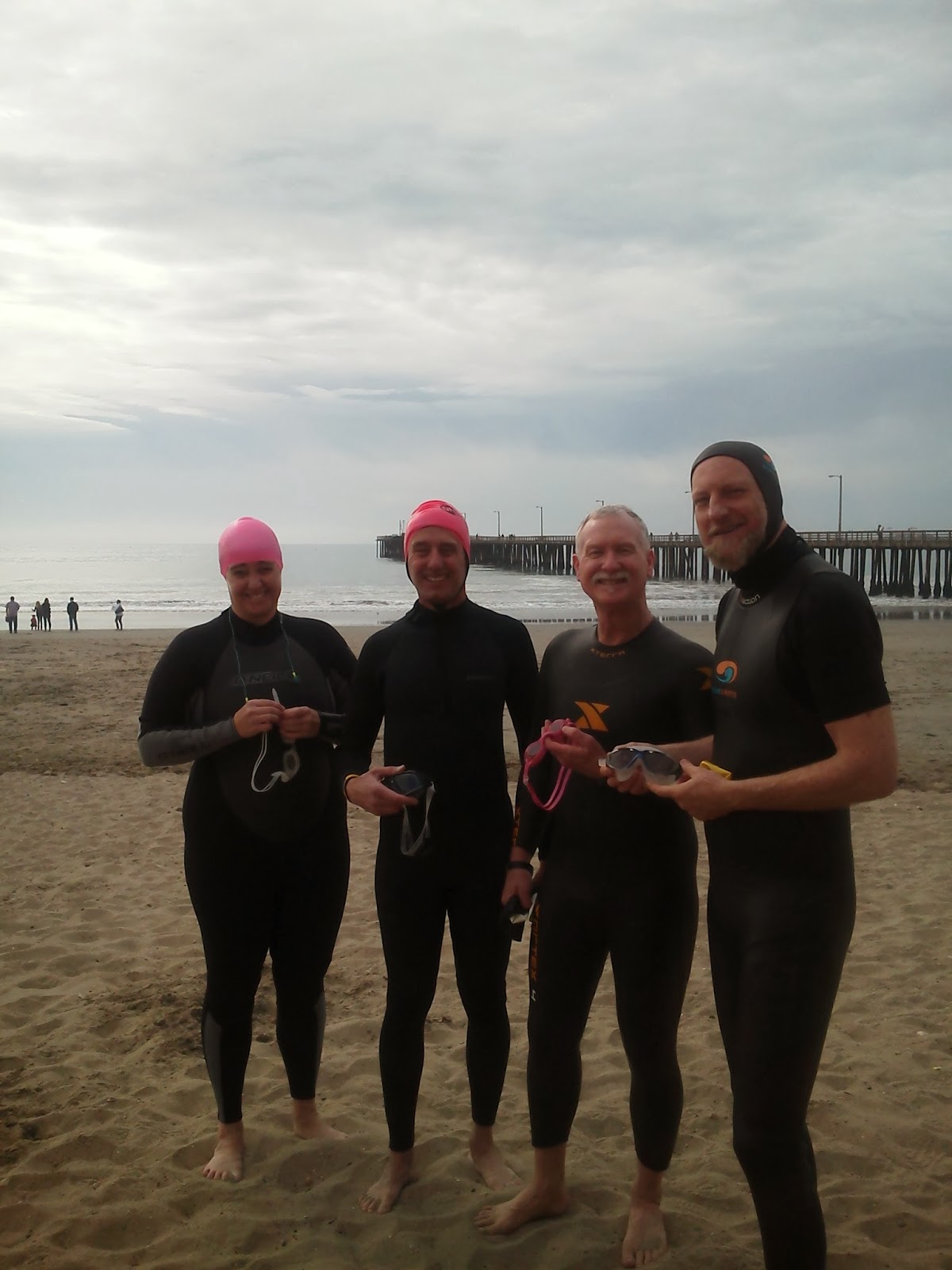 Thanks to Leslie for the photo

Ali, Niel, Duke and Tom took a short swim today.  The conditions were nice; the water was up to 55.5 degrees, this warmest it has been since December 1, 2013, it was overcast, windless and flat except for some 3+ foot waves.  After the too close encounters with boats the last two Sundays we decided to stick close to the pier.  We did an simple 1/2 mile out and back along the pier, got wet and had fun.  It wasn't cold on the beach but the lack of sun didn't encourage anyone to linger, so we scattered to our various other tasks after changing and getting warmed up.

We have a swimmer who is on the mend after a bad bike crash on Monday.  Rick Marina was riding on Highway 1 near Cuesta College with a group that included Duke and John Hanse (Fast John to those who try and keep up with him in the water).  Rick went down hard, fracturing his pelvis and breaking his collarbone.  He is home and beginning his recovery.  Send him your thoughts. 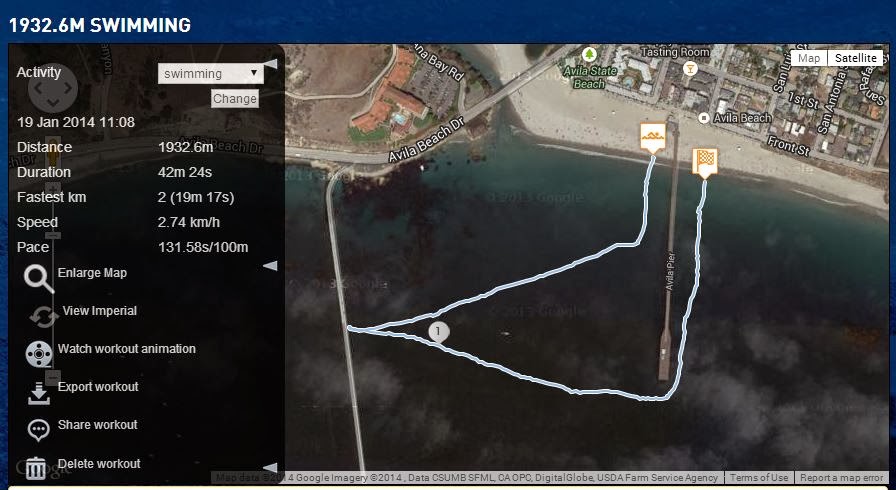 This was another Sunday just like so many others this year; sunny, warm, 53 degree water, very little wind and great swimming conditions with one exception (more on that later).  Sylvia, Niel, Sam and Katie swam, Rob body surfed while Allison, Rick and Rhonda held down the beach. Sylvia went left down the beach and back.  Niel, Katie and Sam went over to the Cal Poly Pier, came back to the end of the Avila Pier and in along the pier.  There were some 4'+ breakers so getting out was a bit more fun than it has been.  There were a lot of seals over near the Cal Poly Pier. One small one picked us up and followed Sam all of the way to the beach.  The only downside with this swim was another boat problem much like the one last week.  This time the boat came in from the east and ran parallel to the beach at high speed while well inside the length of the Avila Pier.  I'd like to see our buoys back. 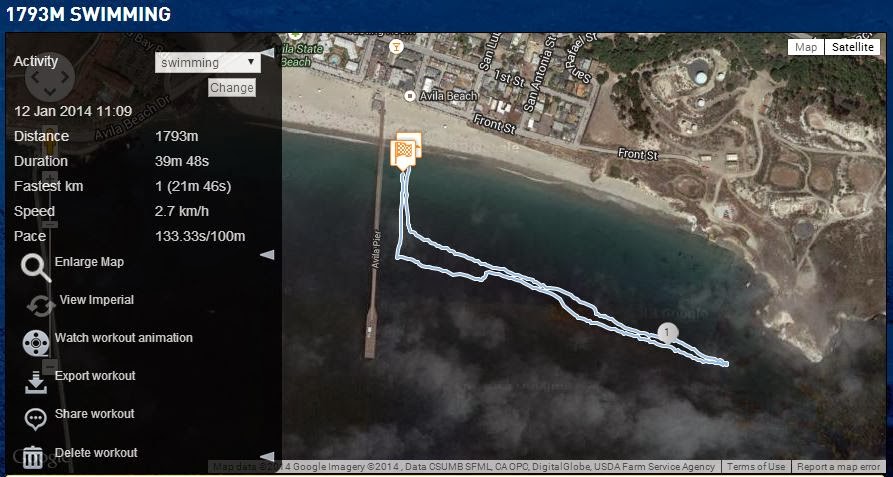 We had another unseasonably beautiful day at Avila Beach. It was in the 60's with a water temperature of 53.  There were gusty offshore winds but on the beach close to the seawall it was warm.  Since it was blowing directly offshore the wind put only a small chop on the water close to the beach.  There were occasional 3 to 4' waves, seals playing in close and dolphins out past the end of the pier.  Niel, Amy, Ron and Brad swam.  Rick, Rhonda, Byron, Sharley and Dave Van Mouwerik traded stories and soaked up the sun on the beach.  We swam down to Fossil Point and back covering just over a mile.  The tide was quite low so we stayed farther off the beach than usual in order to avoid the surf that was breaking neat the point.  Just as we grouped up near the pier a guy in a small Zodiac came through the Avila pier about mid way, He headed out along the pier and then turned left towards us.  He completed a full circle , messed around a bit and then crossed back under the pier.  I don't believe that he ever saw us. There was no harm done but I felt more threatened by this guy than most any other animal that I have come across in the water. 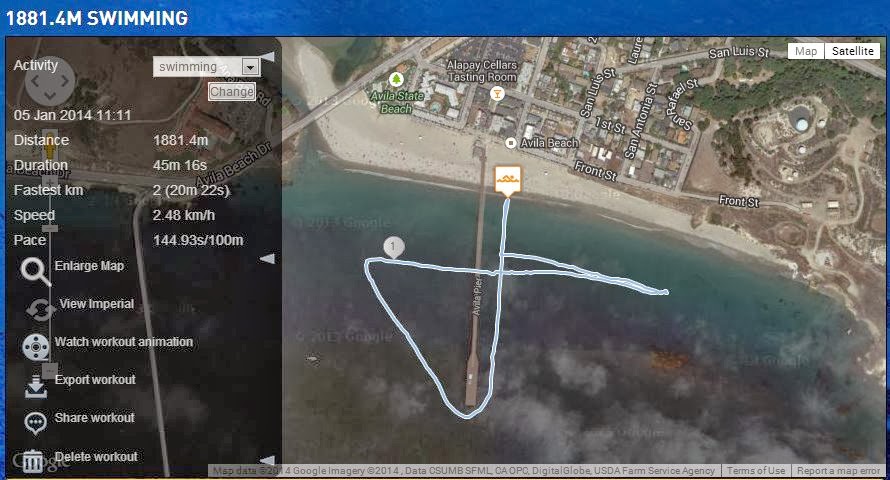 It was a beautiful day for a swim; sunny, calm and a flat ocean.  The water temperature was up (!) to 54 degrees.  Niel, Amy, Sam and Katy made up a route that was a bit over a mile, swimming up and down along the beach and then out to the end of the pier and in.  The water was very clear.  There were quite a few seals around and one strafed Amy and then popped up in front of her which gave her quite a start.  We finished up and enjoyed the warm sun up next to the wall.  Rob got in and splashed around and Rick and Rhonda soaked up some sun. 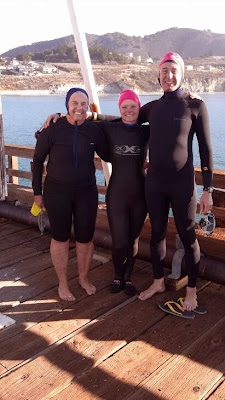 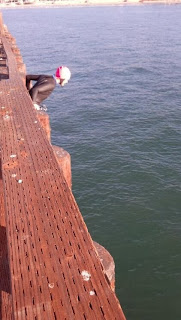 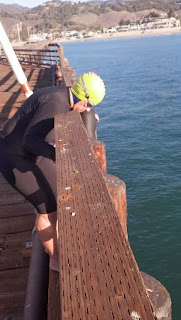 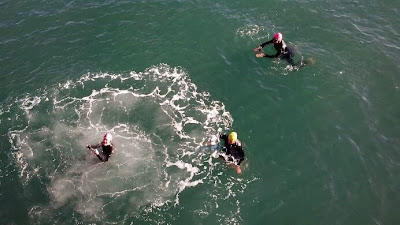 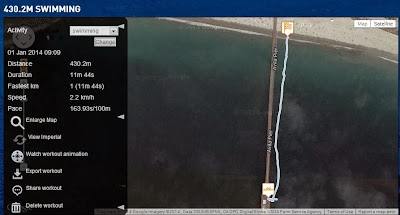 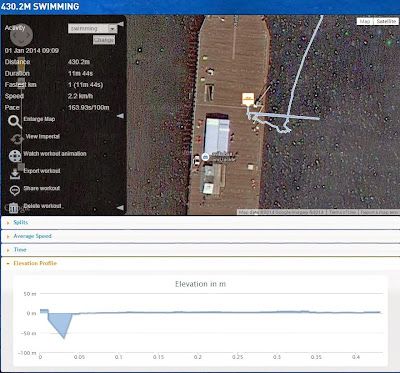