Brilliant sunny early winter morning at Avila... uncrowded beach, easy parking, and the vibe was solid. We were six—Tom, Heidi, Maria, Amy, Jonny, and myself. Tom went in at 11 sharp; the other intrepid five dawdled in a few minutes later.

The plan was to swim to the left down the imaginary buoy line, though Tom and others claim they can still see the buoys even after they have been removed.

Four to five foot waves were coming in sets and we waited for a moment of calmness to swim out into seawater that was definitely colder than the previous Sunday. Heidi’s aqua-watch read 52 degrees, 11 Celsius for those from the far north. The water was clean and clear and we swam to where we imagined the fourth buoy used to be, which was different for me and Heidi and Maria. Once we were confident the water was not too cold for a longer swim, we headed out to the end of Avila Pier. Approaching the pier Jonny, who had run 8 miles prior to our swim, broke out into full-on giddiness, and attempted a manic butterfly stroke. Perhaps a Canadian thing, sans a leg kick. Amy showed him how to perform the butterfly correctly, California style.

Then we headed to the white mooring buoy about a hundred yards north of the pier, circled it, and back to the beach. Swim length—1.1 miles. We all got a bit cold and claw-handed during the last leg of the swim. But the sun and our new-found, somewhat suspicious, technique of pouring hot water inside the back neck of our wetsuits, as well as hot chocolates furnished by Maria, had us all warmed up, copasetic, and gathered around the bench above the stairs. And the craic was good. 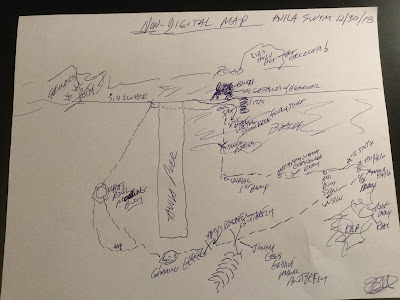 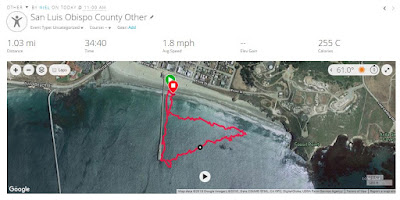 There was not much sun at Avila Beach today with high clouds keeping it cool and somewhat dim on the beach. The water temperature in the surf line was 55 degrees and
53 to 54 beyond the surf. The tide was past full, the waves were laying down, there was a small chop but no wind.  There would be over 8 feet of tidal change today and you could feel the suck as the waves ran out.
We had visits by Byron Briley, Sharley Simpson and Rob Dumouchel.
Niel, Tom and Phil swam our to the end of the pier, towards the point and back along the beach. John, Maria, Bo, Maria, Sydney and Sam did a long lap around the pier. Brian and Peter did their own swims.
The water was clear and the swimming was very nice but the lack of sun cut the post swim socializing short. 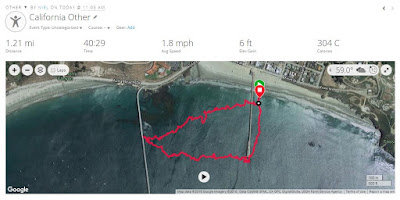 We had beautiful weather and nice swimming conditions today.  The air temperature was 60ish, I measured 55 degrees in the surf line but the water swam like 53. Thin high clouds and rain predicted that night. There was a one foot wind chop out of the SW and the water was clean.
Sylvia Glenn rejoined us today  which was a great pleasure. She has not been able to swim with us for more than a year. She didn't get in the water but maybe next week. The rest of the group was Niel, Peter, Maria, Heidi, John, Jonny, Brian, Tom and Amy. Peter and Brian did their own individual swims. The rest of us went out to the end of the Avila Pier, then pounded our way through the chop to the Cal Poly Pier and had a surprisingly tough swim back even though the chop was now coming from behind resulting in a well earned mile and a quarter. 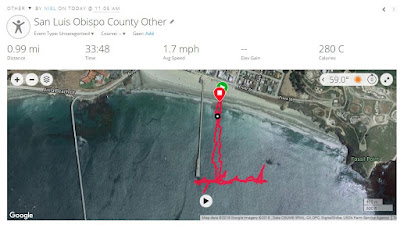 We have seen the last of our lingering summer water temperatures and had beautiful winter conditions today; thin clouds, 65 to 70 degrees on the beach, nice clean 55 degree water, small waves, no wind and flat conditions.

Niel and Tom swam the 'T'
John, Johnny and Amy swam a parallelogram of a little over a mile.
Peter did his usual individual swim.
Jeannine, Brandon and Emily started late, I'm not sure what they did.