We had 10 swimmers do the buoy line today.  There were thick gray clouds down to the horizon, no wind, 2' surf and 55 degree water.  It did not look warm and everybody was feeling cold before we got in. Swimming to day were Sylvia, Niel, Amy, Rick, Tom, Leslie, their friend Brian, Stephanie, John Hampsey and Jess. Jess was visiting the area, lives in Oakland and swims in the northern part of San Francisco Bay and at the Aquatic Park.  IF felt colder than 55 to me getting in and it wasn't until I got to the end of the buoy line that I began to feel comfortable. The water was flat and clean and made for great swimming.
The buoys have not been moved but my Garmin 910 read only .72 miles at the end, which is about .3 miles short of usual......... The only thing that was different was that I was stopping the tracking when we stopped in order to  time only my swimming.  It is just another mystery. 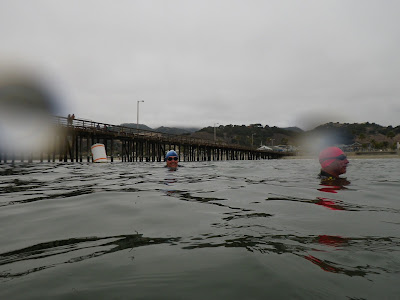 Stephanie and Rick at the start 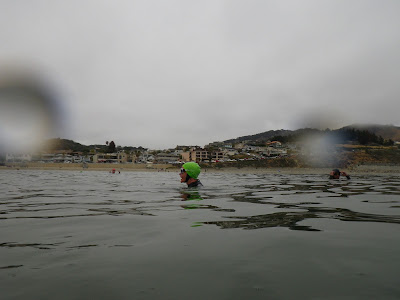 Amy and Brian at the start 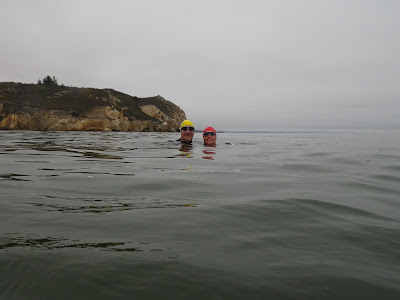 Tom and Leslie at the last buoy towards the point 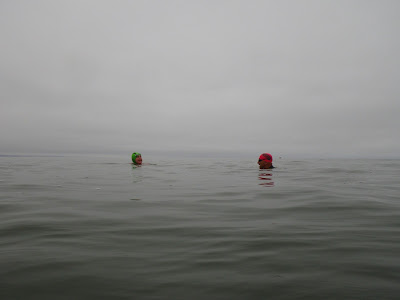 Jess and Rick at the same spot 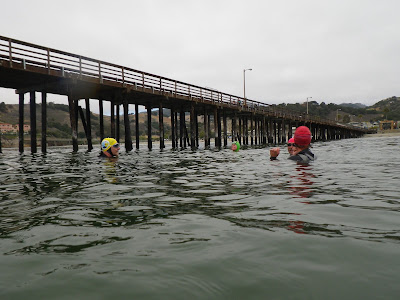 Tom, Jess, Rick and Leslie before heading under the pier for the second half of the route

The Fourth of July Not Duke's Birthday Port to Avila Swim 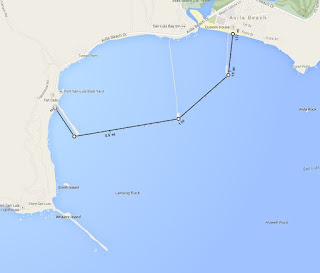 Duke's birthday is not on the 4th of July but it is close enough that I'm naming this swim after him. Besides, it was his idea.  The route starts at the little beach at the foot of the Harford Pier, goes to the end of the pier, to the end of the Cal Poly Pier, to the end of the Avila Pier and in to the beach, where we will have a potluck post swim feed. This is a 1.75 mile swim with a long stretch of the course a 1/2 mile offshore.  I'd like to have three support paddlers; front (navigate), a middle rover and a sweep at the rear.  Mark has stepped up with his SUP, so we need two more.  If anyone has a friend or spouse that would like to support this swim it would be much appreciated. We also will need to organise rides over to the port or alternately rides back to pick up the cars afterwards.  Let me know if you are intending to do this swim so I can give the lifeguards a head count.  I want to start this swim (in the water) around 9:30. That will make parking easier and have us back on the beach before it gets too crazy at Avila.
Be advised, several of our swimmers have done this swim successfully but the water quality at the Harford can be kind'a 'industrial' and there are a lot of seals and sea lions there.

I was out of town so this post was written by John Hampsey.

The day was sunny but windy and cool. The strong breeze was coming out of the west/northwest, according to our magnetically challenged compass. The water was choppy and rough; the water temp around 53. Six entered the water—Amy, Amy Hewes, her brother Bo, John Hampsey, Sylvia, and Aly. Sylvia and Aly did a shorter swim and the other four swam south toward Fossil point. We all took in some water along the way because of the choppy water. After meeting at the last buoy, we decided to take on the quest of swimming to the end of the pier right into the current, wind, and white capped water. It was an edgy and adventurous swim. Hard to stay together and know where the other swimmers were because it was difficult to see over the choppy waves. And our heads kept crashing down against the water between waves. It took a while, but we all made it to the end of the pier, Amy H creatively coming in from the southwest. We then headed to the second buoy north of the pier and from there diagonal into shore. We were all a bit chilled, but it was a great and exhilarating swim into the Avila blue.

Thanks John!
niel
Posted by Niel at 2:15 PM No comments:

Avila was grey, overcast and cool. There was a light breeze out of the SW which was just enough to mess up the surface of the water and 1 to 2 foot surf.  The water temperature was 54 degrees. Amy 1, Niel, Shawn Turner, Drina and John Hampsey were going to swim. Sylvia, Rick and Rhonda were on the beach.  Shawn is from Carmichael, does most of his swimming in Folsom Lake and swam with us about 3 years ago when he was last in the area.  We did a simple buoy line swim. We all thought that the water felt cold when we got in and it took 10 or 15 minutes of swimming to get comfortable. The sun came out while we were in the water and made things feel much warmer. We spent a total of 40 minutes in the water and covered a mile.  There is no map today because I left my watch at home. 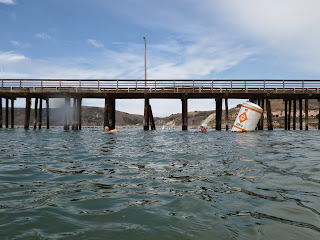 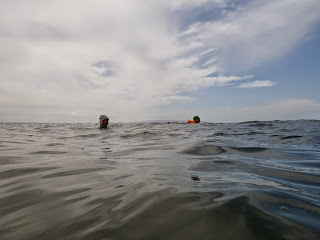 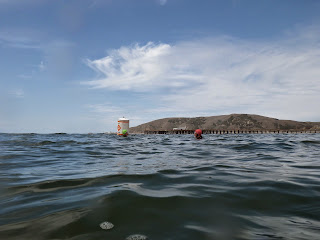 Amy and John
Posted by Niel at 2:50 PM No comments: 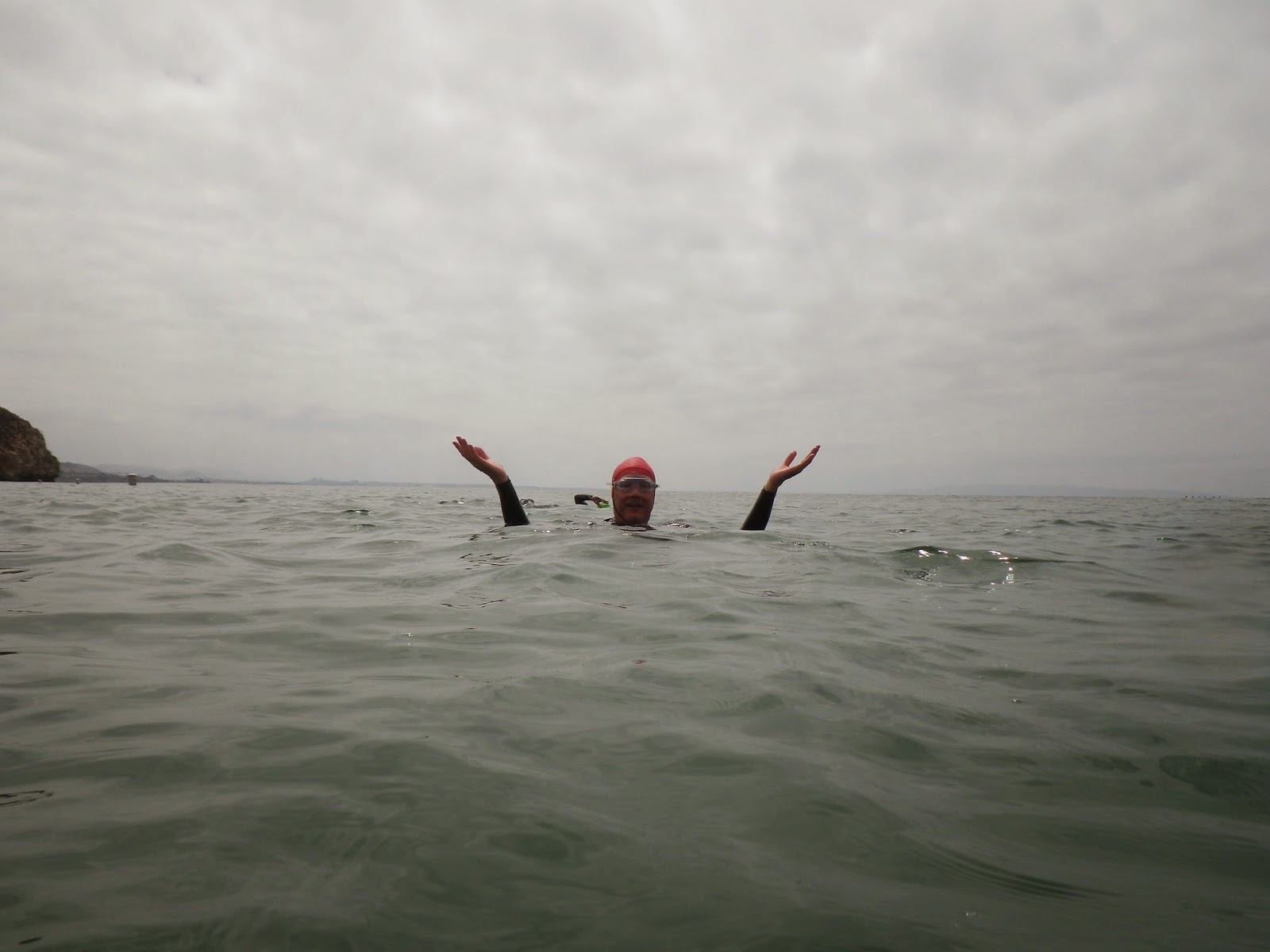 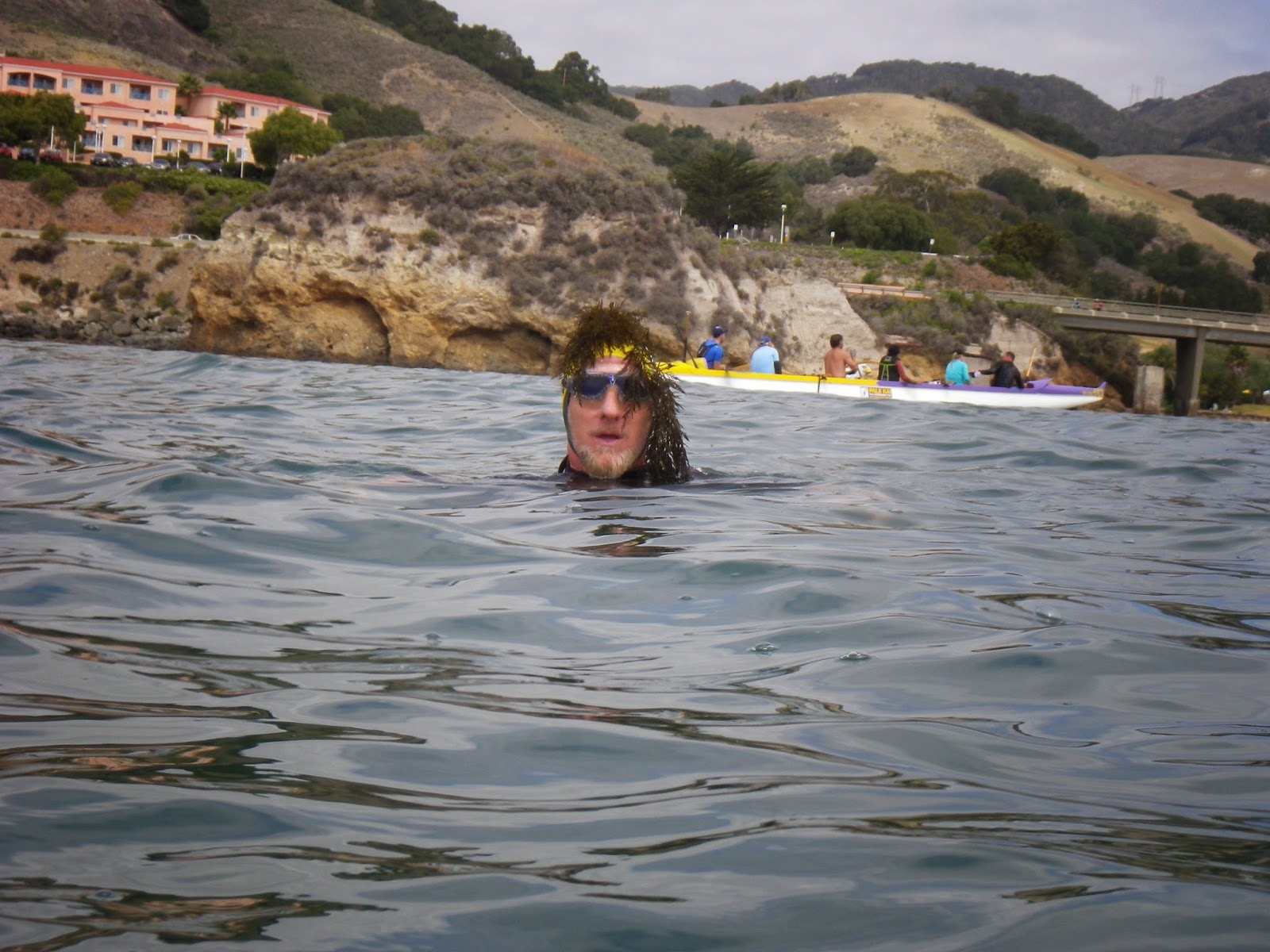 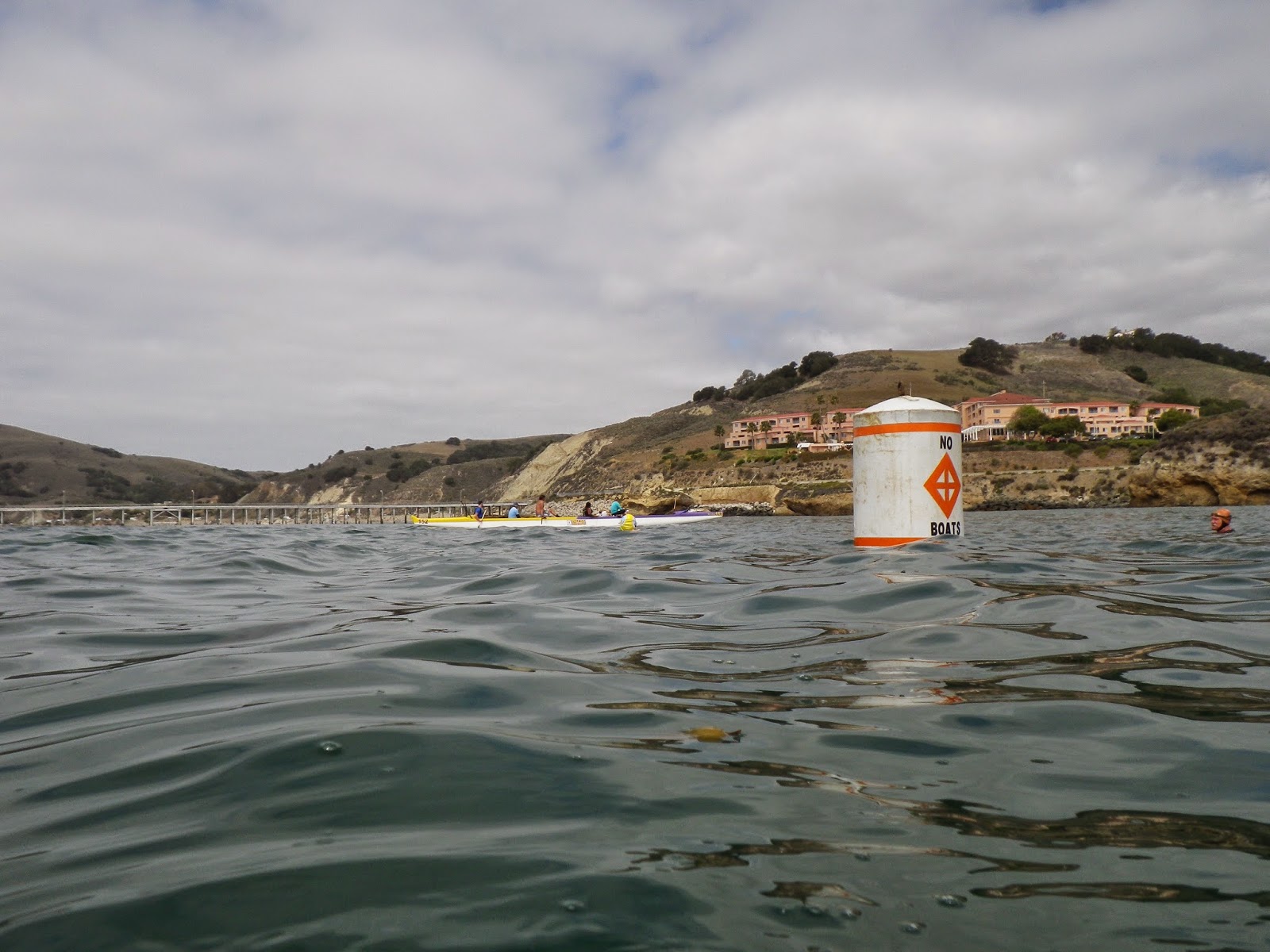 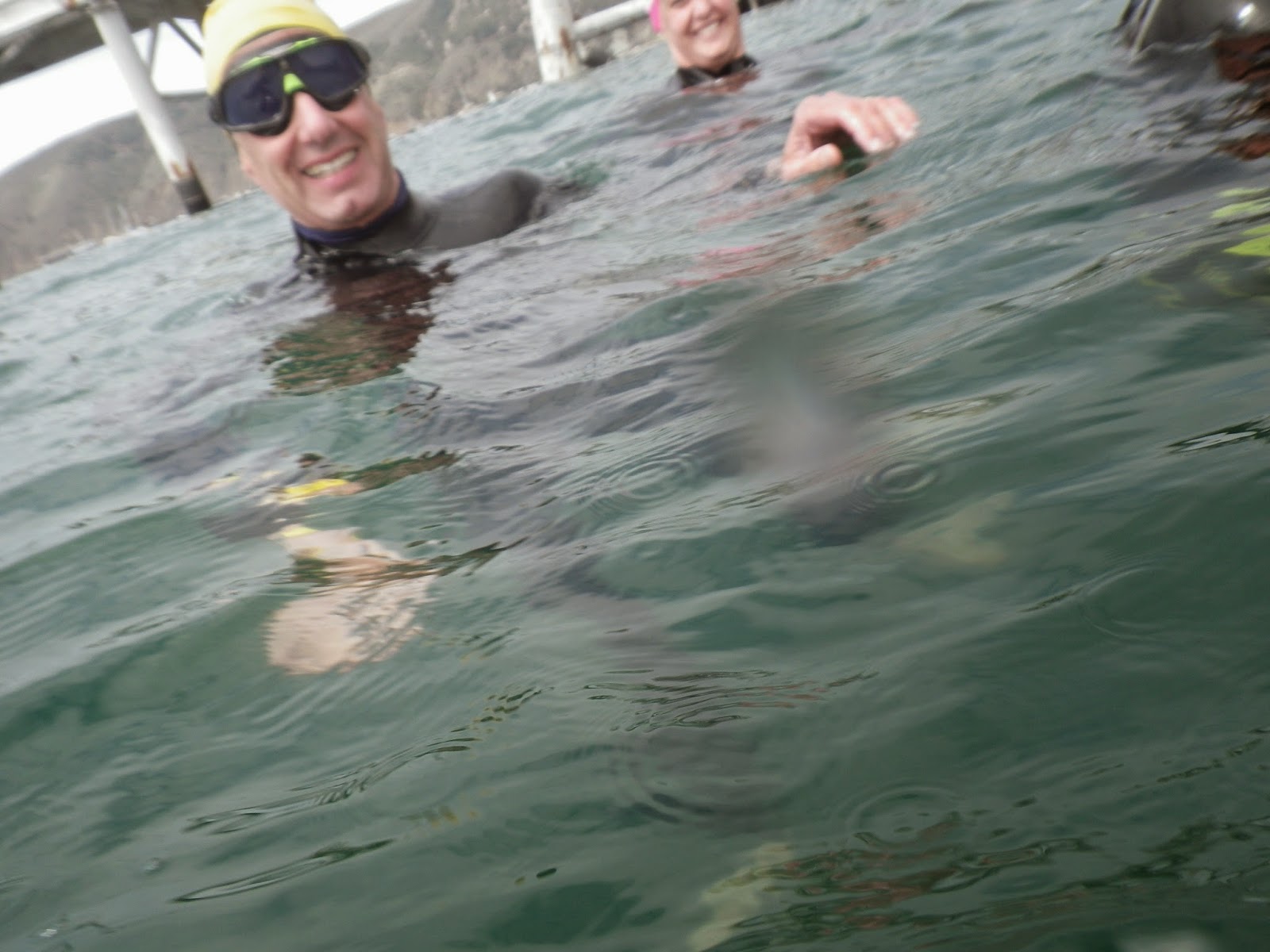 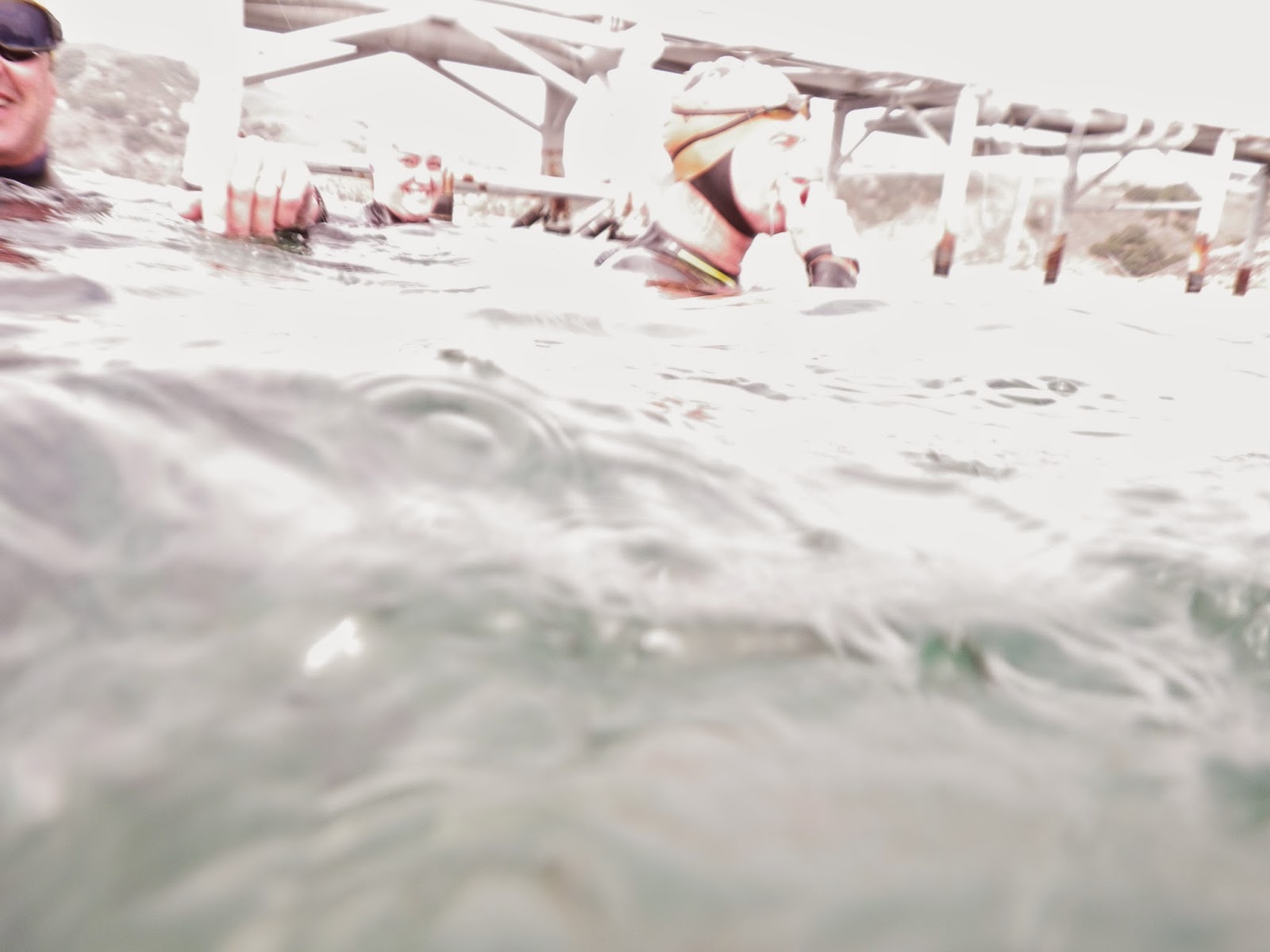 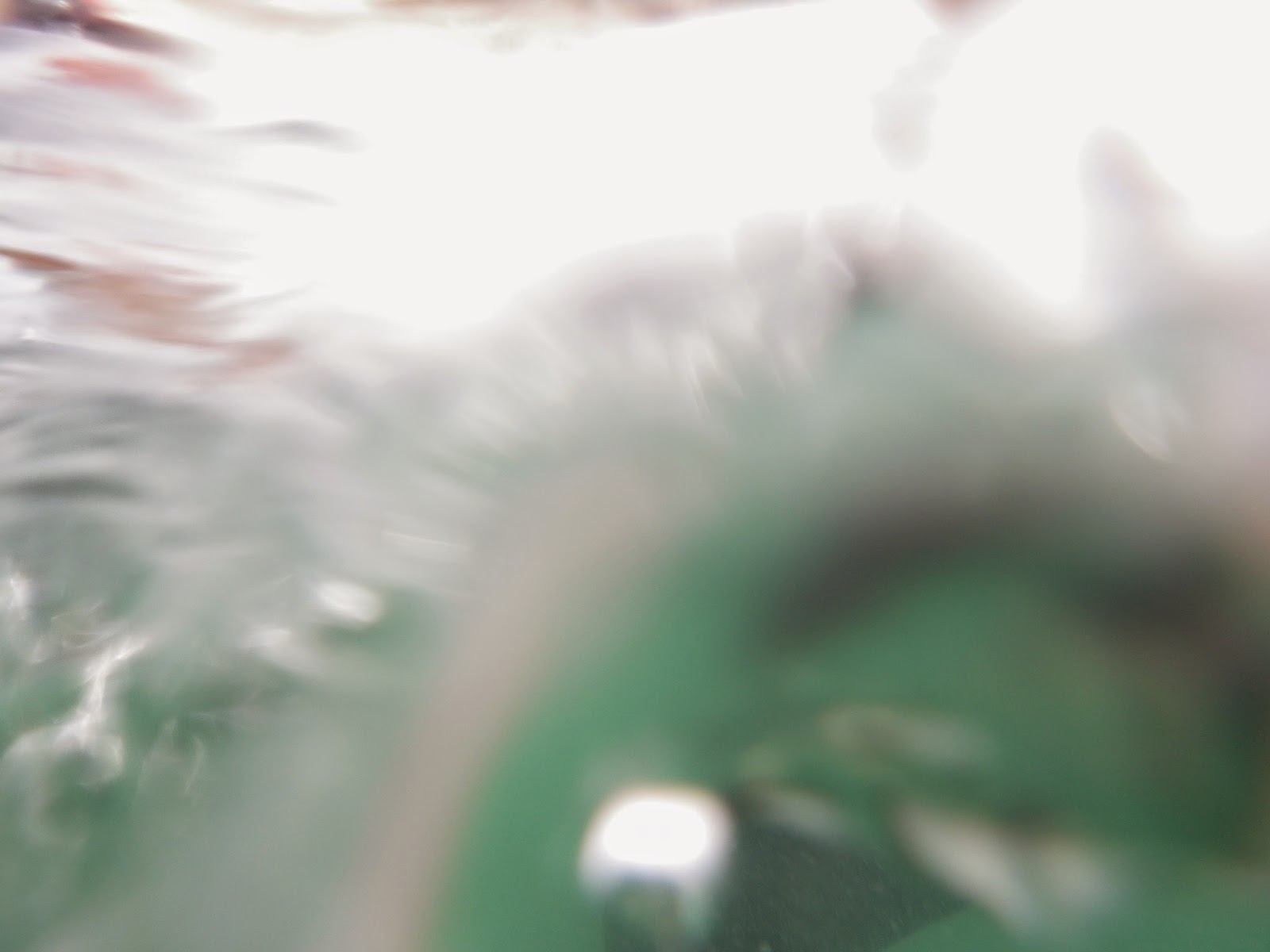 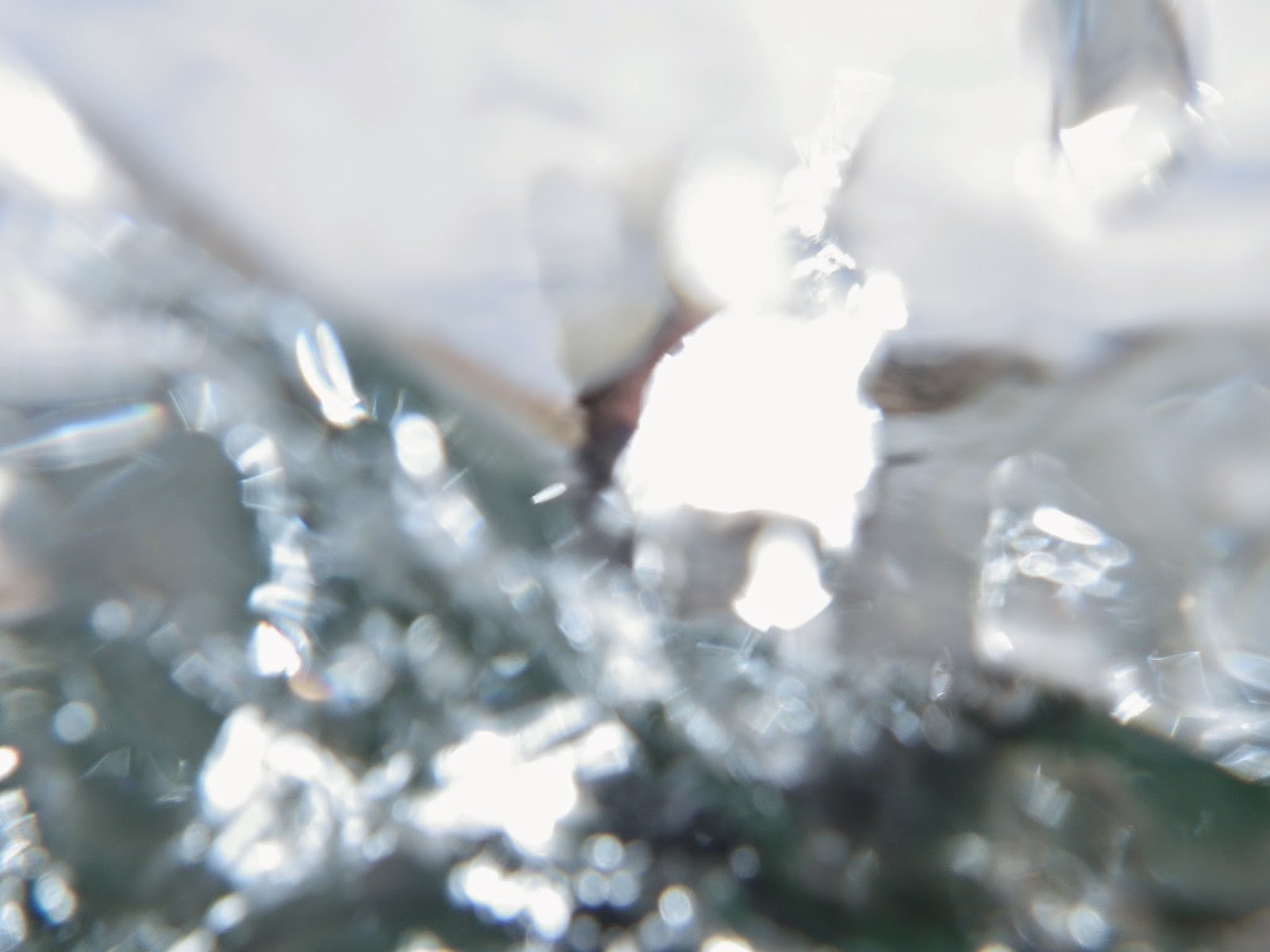