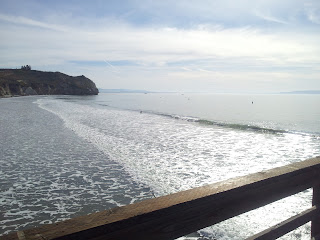 It was another beautiful day at Avila Sunday, sunny and warm but not hot, no wind, and no sea life to be seen in, on or above the ocean. The only condition that was not perfect for swimming was a water temperature that seem stuck at 52 degrees. We had 8 swimmers today; Niel, Rob, Sylvia, Amy, Duke, Roberto, Ed and Casey. We decided to just do a mile along the buoy line starting left and them back , under the pier, on to the creek and back to our starting place. I had 33 minutes in the water. 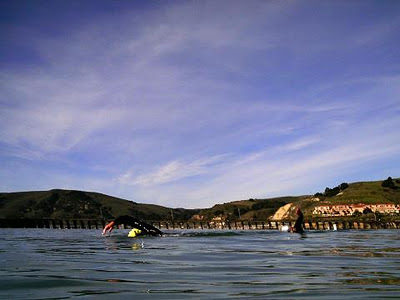 Also... don't forget to check out the new Central Coast Open Water Google Group for swim information in Avila and other places around the area
Posted by Niel at 9:33 AM 3 comments:

Concerns about the water quality after the heavy rain caused us to cancel our regular swim today. Rob suggested that we do some beach cleanup instead. I liked the idea of giving back and improving our playground so we met at the usual spot at 11 with buckets and gloves. Duke was already there hoping to swim after his run. Disappointed, he settled for a nap until Angela returned from her run. Chad came by and said hi before going out on his run. I did check the water temperature and it was still 52 degrees. There had been a big high tide of +6.2 at 9:32 which combined with the large waves to send water all of the way to the sea wall. At 11 the waves were still large with 6 to 8 foot faces but not rideable. Rob and I walked the beach and collected a couple buckets of plastic trash, toys, cigarette buts and general junk. Kris and I had lunch on the beach and finished up as the cloud cover was moving in.
By next Wednesday our now familiar anomalous weather pattern of clear skies, offshore winds and warm temperatures will be back in place so next Sunday should be another beautiful winter day at Avila. Enjoy it now before the drought hits. 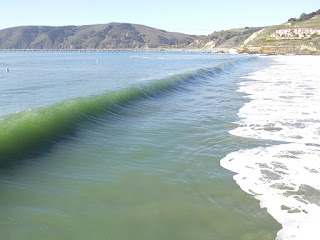 Bonus Announcement:
New Google Group for Open Water Swimmers on the Central Coast!
I set up a Google Group for local open water swimmers to use to talk swimming and set up swims locally. The idea is to pull swimmers from more than just our regular Avila Dolphin crew so please forward it along if you have friends that swim elsewhere like Lake Lopez and Morro Bay. My friends in Orange County use this program to coordinate swims and it has been really successful for them.
The group is located here: http://groups.google.com/group/centralcoastopenwater and there is a link to join on the right hand side of the page.
Rob D.
Posted by Niel at 4:26 PM No comments: 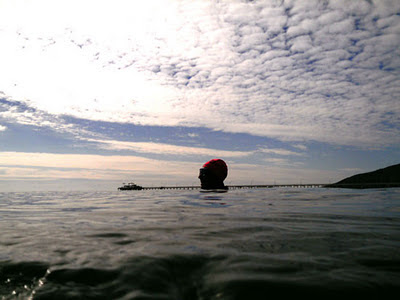 It was a little cool at Avila with partial clouds, but it was completely still with flat water conditions.  Surf was in the 2' range, the water was clean and 52 degrees with just a few birds and maybe one seal to be seen.  Swimming today were Ed, Rob and Niel.  There was a jet ski practicing tow-in surfing at the end of the beach  by Fossil Point so we decided to start on the other (west) side of the pier and see let the conditions decide the route.  We swam out to and down the buoy line to the last buoy at the creek,  turned and continued to the end of the Avila Pier.  At this temperature it takes me about 10 minutes to get 'comfortable' to where I start thinking more about swimming than how the water feels on my exposed skin.  Next week I want to ask Rob (no wetsuit) how this works for him.   The jet ski left while we were grouping up at the end of the pier so we decided it was OK to swim to the end of the buoys on the east side, close to where the jet ski had been.  Once there we regrouped and swam along the buoys back to the pier and in to the beach.  We were in the water for 36 minutes and covered about a mile.  After we got out the sky had cleared and it was nice and warm on the sand. 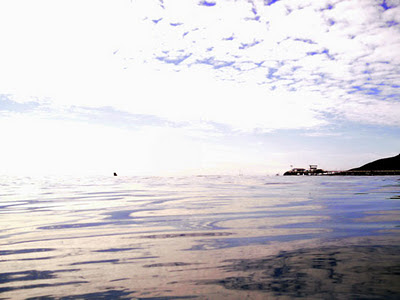 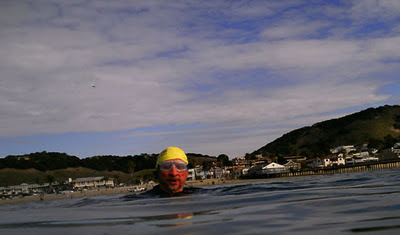 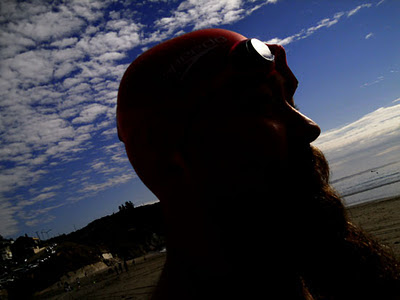 It was beautiful at Avila today, warm (70+) with a mild offshore breeze and unlimited visibility.  The tide was ebbing, the big waves were gone leaving just a small swell moving towards the beach.  The water was 52.5 and still kind of murky from the big swell earlier in the week.  It was Rob, Sylvia and I on the beach today.  Sylvia elected to soak up the sun and read the paper so Rob and I got our gear on and waded in.  The water was biting at my ankles and hands and I took my time getting out, with plenty of looks over to Rob, he of the non-wetsuit persuasion, to see how he was doing.  We got going, met up at the first buoy and kept going.  With the tide up and not much swell it was a good day to visit Fossil Point so we continued past the last buoy and swam parallel to the beach until we were bobbing in the waves 75M from the point.  At some point between the last buoy and the point I had gotten as comfortable as I was going to get.  My hands and feet were cold and my face was numb but my arms, legs and core felt OK.  We agreed to swim from the point to the end of the pier.  When we regrouped at the pier I was still feeling about the same, not getting any colder yet, so we pushed on to the last buoy at the creek and came back along the buoy line, under the pier and in.  We were in the water for 53 minutes and covered a mile and a half.  Afterwards the sun on the sea wall was almost too warm, which was just about perfect. 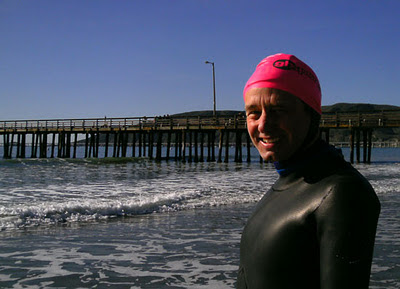 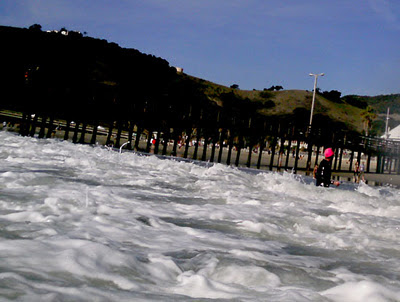 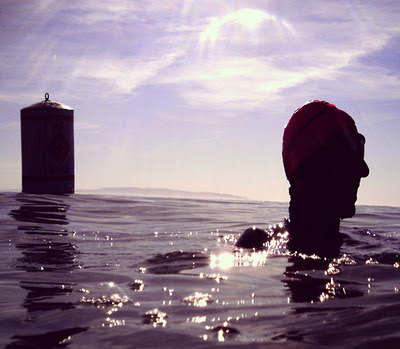 Four of us swam at 10 o'clock today.  It was sunny, clear, in the 60's and calm at Avila this morning.  The water was 53 with small surf.  There were no birds or other ocean life to be seen.  Swimming were Sylvia, Niel, Susan James and Ed.  We swam out along the west side of the pier and around the end.  We came back along east side of the pier to the dock.  There was a plan to climb up on the dock, from there onto the pier and to jump back in, however the coating of barnacles and mussels on the rungs of the ladders made a barefoot assent impossible.  So, we decided to do a longer swim with no vertical element. We swam to the last buoy in the line on the east side and back along the buoys to the pier and in.  We were in the water for 33 minutes.
Duane Leib was waiting for us when we got out.  He came by to pick up some inspiration to get back in the water once he has completed rehabing his shoulder after surgery in November.

We will be back to our regular 11 AM start next Sunday.