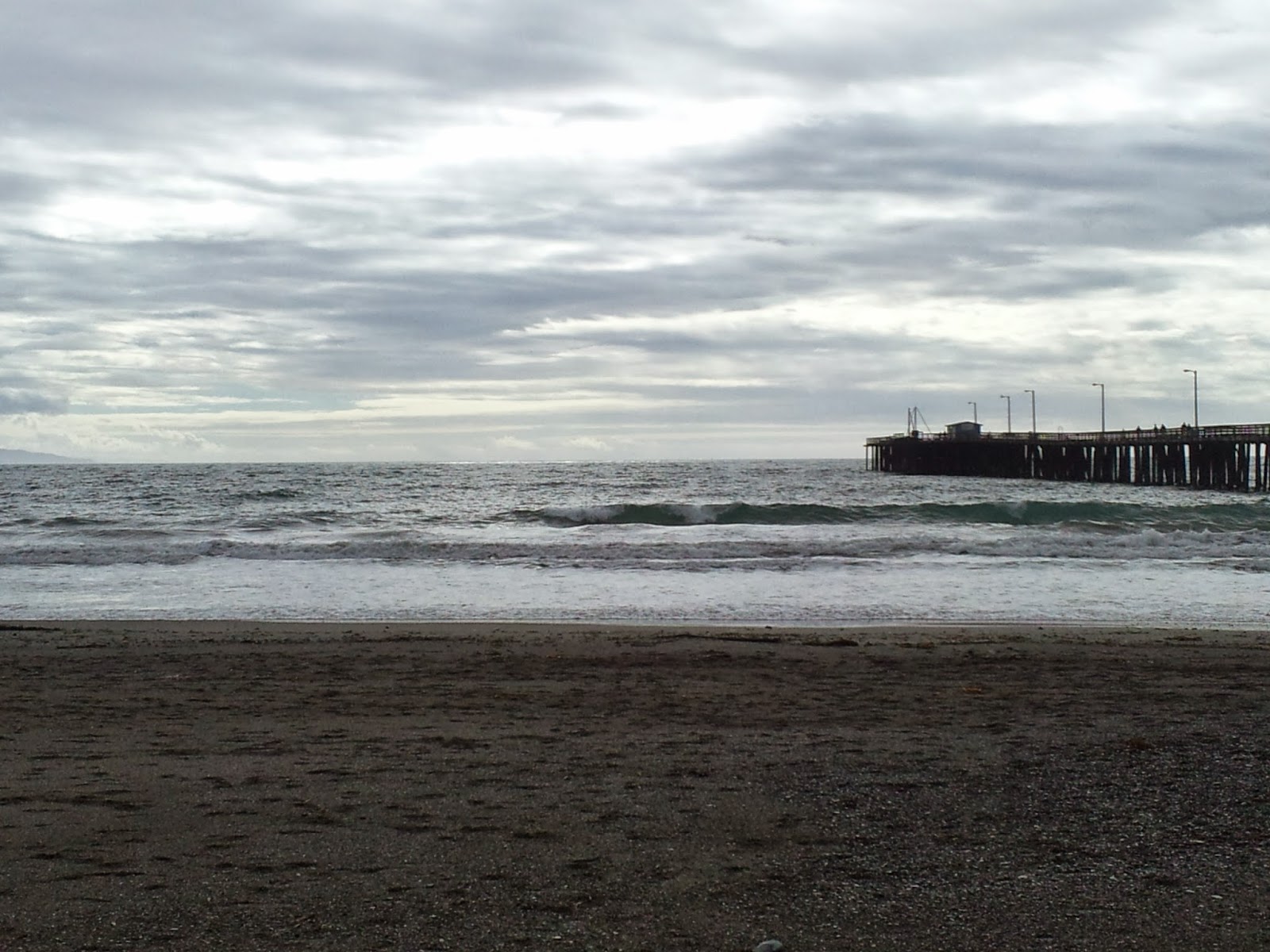 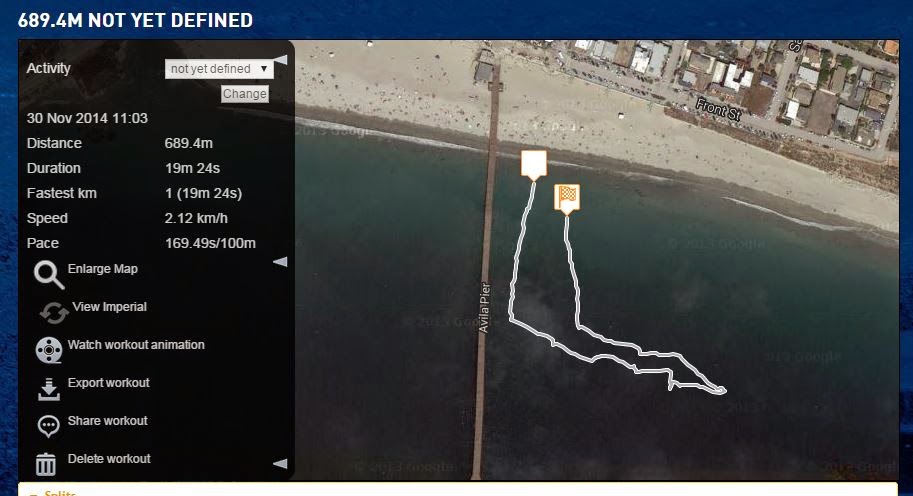 A Short Swim With a Lot of Vertical Distance

The sky was bright with an occasional shower. It was warm, about 65 degrees with a water temperature of 58.  There was a strong and steady wind out of the SE, small waves but a closed packed wind chop that was running to 3+ feet. Sylvia watched our stuff, Pete body surfed and Stephanie and I tested out the swimming conditions. The buoys have been taken out so our route was going to be approximate.  When we started swimming out I found that I had underestimated the conditions and it was rougher than I had thought.  It took some work and punching through some waves to get out against the chop and wind.  Once we turned parallel to the beach it was not as hard but very messy swimming with no organization to the surface of the water.  I was not swallowing any water but the swimming conditions were as messy and changeling as I have experienced.  I was warm and comfortable so it was just a matter of figuring out how to make progress in these conditions.  I kept stopping in order to stay connected with Stephanie because I would completely lose sight of her if I got more than 20' away.   We both had a lot of fun on this swim and this was a nice accomplishment for Stephanie who has only been swimming in the ocean for a few months. 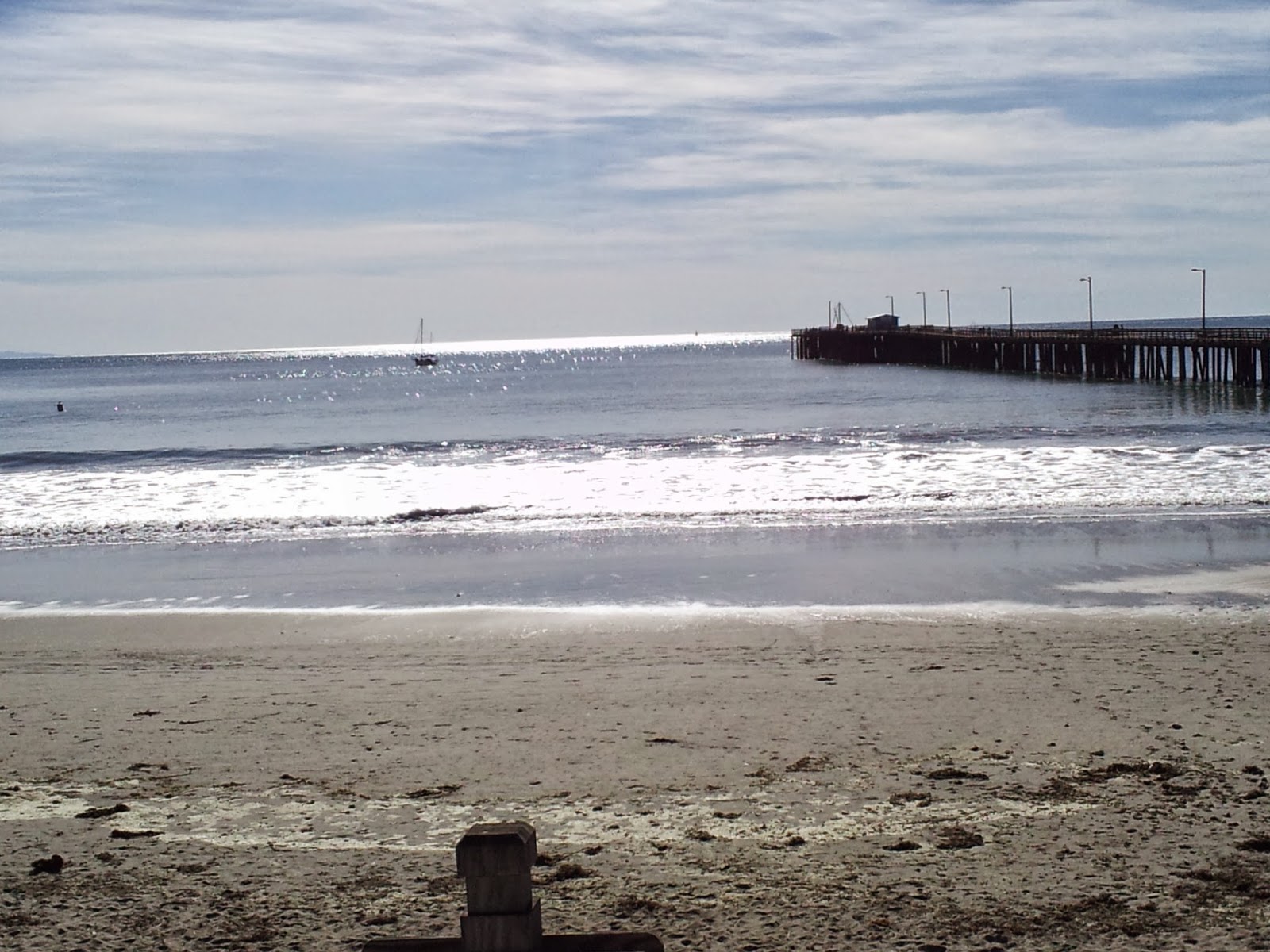 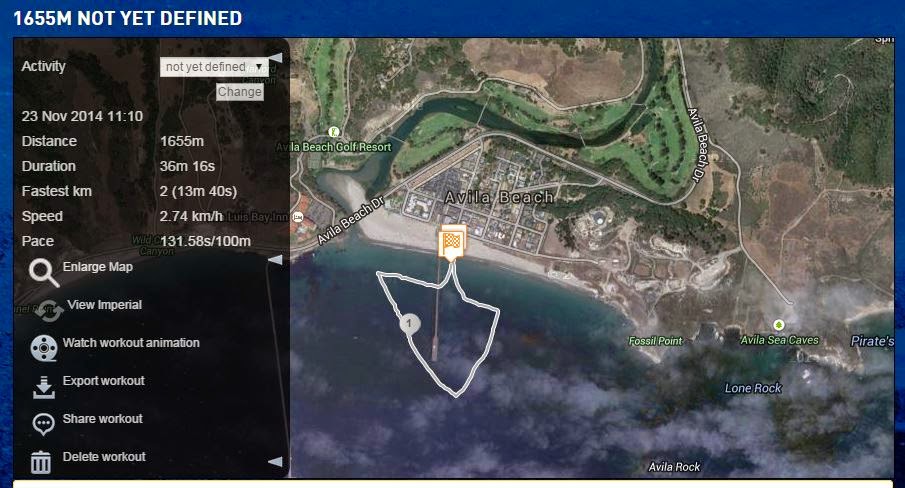 Pete, Niel, Duke, Rick, John Hampsey and John Harmse swam out to and around a sailboat that was anchored a short ways beyond the end of the pier. Pete made his own way out and back. The rest of us swung by the two remaining buoys, out to the boat, towards the mouth of the creek, back under the pier and in.  The total distance turned out to be just over a mile. The water temperature was 58.5.  There was a gusty offshore wind that died away after we got out leaving the ocean glassy and the beach warm and sunny. 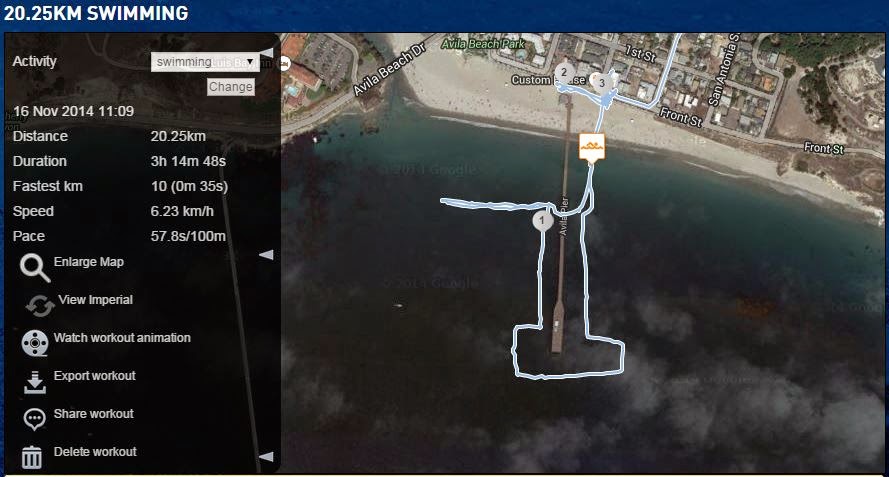 The T is for Tom Swim 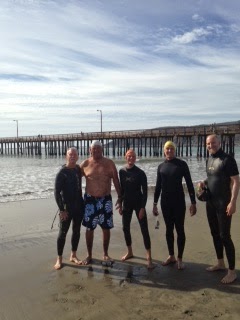 Duke, Pete, Dale, Niel, Tom
Stephanie was already out in the water 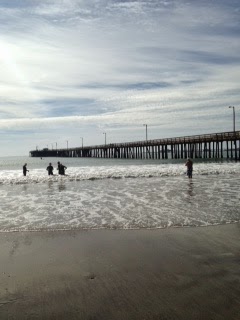 Thanks to Leslie for the photos.

The water temperature was 58 degrees.  There were high clouds so the sun came and went.  It was comfortable with the sun out and cool without It. At 10:30 there was an offshore breeze off of the beach.  It moved into the west as we were swimming and then died away to nothing.  Pete Kelley did his own swim. Stephanie and Dale swam the buoy line and Duke, Niel and Tom Lorish swam a route by Tom. His birthday is coming up and he wanted to see how well he could swim his initial.  It came out pretty well and was fun.  Not sure how we will do a D or N or S for Sylvia..... We added a little distance on the end by going down to the buoy and back.
Ignorie the time and distance information. This was not a 20 k swim.  I thought that I turned off the GPS at the end of the T but it tracked me all of the way back to town. 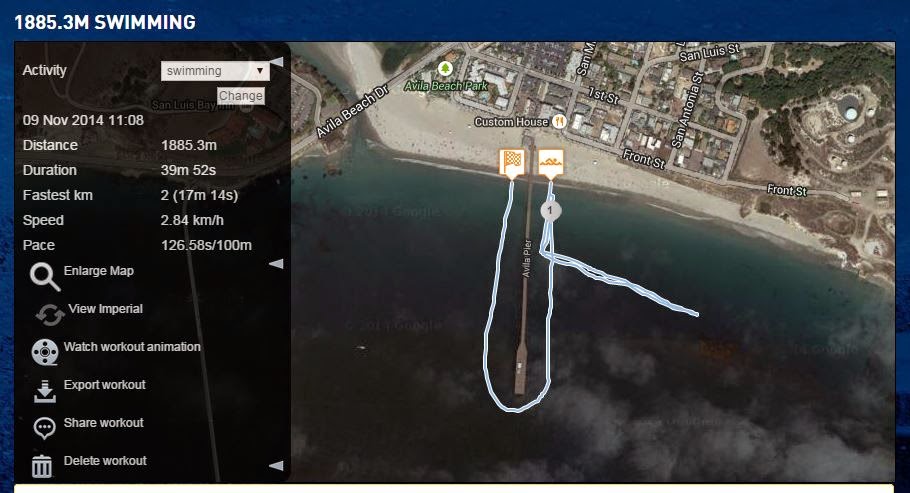 We had 13 swimmers today. We started out under low overcast with visibility changing from 1/2 mile to well over a mile.  The water was 59.5, flat, clear and glassy.  Swimming today were Pete Kelly, Sylvia, Yvonne, Niel, Dale, Rick, Amy, Tom Lorish, Stephanie, Tom Hampsey, Tom Harmse, Ali and Diego.  Most of us went out and left down the buoy line. One group swam out towards the end of the Avila Pier and the second swam the triangle. This was Diegos second ocean swim and he was up of a half mile so I stayed with him out and back along the left side of the buoy line and then swam around the pier by myself after seeing him in to the beach.
Once we were out of the water the overcast cleared off so we had a nice sunny day to relax on the beach.

This was Yvonne's last swim with us. She is leaving tomorrow to move to Michigan.  We'll miss her.

Duke was not with us today because he had some kind of event to do on his bike involving fondue.   ;-) 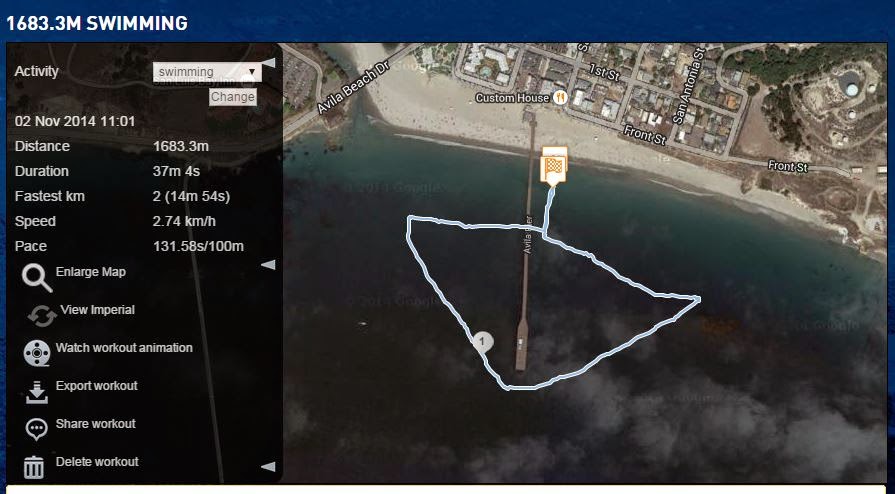 Avila was sunny and comfortably warm. There was a light wind out of the east and 2 - 3' surf with an occasional 4+ footer.  The water was 60 degrees.  Swimming today were Niel, Lloyd, Tom Lorish, Stephanie, Rick and Pete Kelly.  Pete did his own swim. The rest of us went down to the last buoy where Stephanie returned along the buoy line while Rick, Tom, Lloyd and Niel completed the triangle.  We had the beach practically all to ourselves afterwards.