Avila Beach was sunny and windy on Sunday. The water temperature was 52 -53 degrees with some colder spots. The wind was coming up as we got in and increased while we swam.  Everybody got in on the left (east) side of the pier.  Niel, Tom and Damian swam the triangle counterclockwise, Rick and Marcus got out to the first buoy and came in, John, Amy and Kate (her first time) went out to the buoy line and went left. Kate came in at the second buoy. John and Amy went to the last buoy, to the end of the Avila Pier and came into the second buoy on the right side of the pier. Peter Kelly did his own thing.


Tom and Damian were cold when we got out. Cold water, no sleeves and a strong wind are a tough combination. John Hampsey was cold and he wears a full suit.
An hour after we got in there were whitecaps forming all of the way in to where the surf was breaking.
Humpback whales are migrating past the Central Coast and can easily be seen off of the beaches north and south of Avila, but they have not come in clost to Avila Beach yet.

We had a nice group today with conditions much like last Sunday; sunny, comfortably warm, 55 ish degree water and a NW wind that was building up as we were getting ready to get in. Swimming today were Niel, Jim, Leslie, Tom, Liz, Rick, Amy and John and a special school break drop in appearance by Rob Dumouchel with Dani Lu and Kelli.
Why a Two  Boats Swim? Well, the plot did not pick it up but there was a sail boat moored on either side of the pier roughly in line with the course of the traditional Avila Triangle, so Tom's plan was to swim the triangle with a added counterclockwise loop around the sail boats. It looks like Garmin either ignored the circle or made it into a jog.
The swim was great. The wind was from the lower left corner of the plot. The chop and current increased as we approached the end of the pier and got rough on the windward side. We got a nice push on the leg back towards the pier.  Amy and John Swam down the left buoy line to the point, to the end of the pier and in.

Today was a beautiful day for a swim; sunny, comfortably warm and with the change in the wind the water temperature was up 7 degrees to 57 from last Sunday.  The wind was just starting to pick up as we were getting ready to get in.
Swimming today were Pete, Niel. Elizabeth, Tom, Amy, John, Duke, Marcus and Rick.  Niel. Elizabeth, Rick, Duke, Marcus and Rick swam out to the first buoy and headed to the left. Amy and John got in a little behind the main group and Peter, as usual, did his own thing. The main group went out to the first buoy and swam down to the last buoy and back to our starting point. It was starting to get choppy. Elizabeth and Marcus headed in while the rest of the group swam to the end of the pier. It was very choppy at the end of the pier where we were exposed to the swell. At the end of the pier Rick proposed that we do The Sombrero Swim in honor of Cinco de Mayo, meaning we would finish by going in along the pier and then swim out and back along the other half of the buoy line.  There were white caps on the swell on this (the windward) side of the pier so we had some work to do but it was a nice swim and the warmer water felt great.

We had a beautiful day for our regular Sunday swim; sunny, warm, no wind (yet) with a water temperature that was a degree lower than yesterday (50 degrees!)
as the only fly in the ointment.  Swimming today were Chad, Niel, Rick, Amy, Duke, Stephanie, John and Evan. We did the one mile the Avila Triangle.  Everyone was a bit apprehensive about how 50 degrees was going to feel. 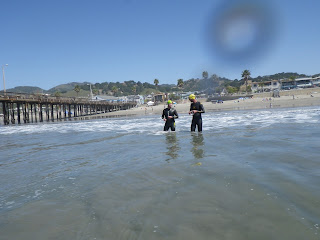 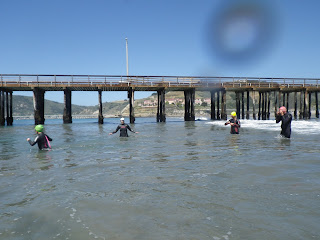 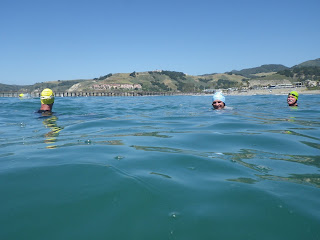 Chad, Evan and Duke at the end of the buoy line on the left side.
John waited for Amy and Stephanie.
They swam to the end of the pier and came in along the pier. 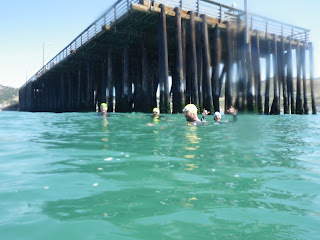 Duke, Rick Chad and Evan at the end of the Avila Pier. 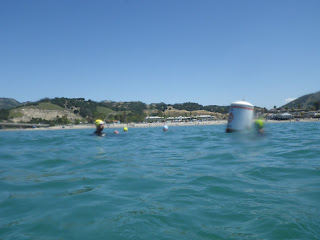 Chad, Evan, Rick and Duke at the end of the buoy line on the right, at the creek.

Before we began the last leg back to the pier a middle aged man on a large blue and white wave rider came tearing in towards us at high speed. He got  close enough for us to see a lot of detail before he noticed us and headed towards the Cal Poly Pier. Just before this when John, Amy and Stephanie were at the end of the Avila Pier, they saw the same jerk riding inside the buoy line on the left side of the beach. We learned later that the lifeguards had alerted the harbor patrol and the clown had been stopped and hopefully cited. Just to ensure that we understood his eligibility as a future master of the free world he later rode in to the buoy line on the left side of the pier and pointedly thrashed around jumpin his own wake just outside the buoy line. This was while there were people swimming inshore of him. Absolutely contemptible behavior.

Congratulations to Rhonda Marina who won her age group in the SLO Half Marathon Saturday!