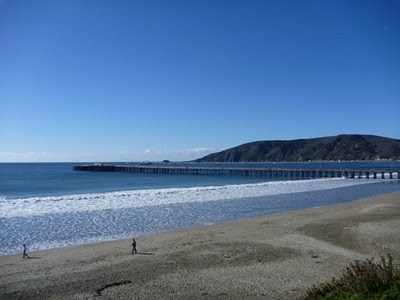 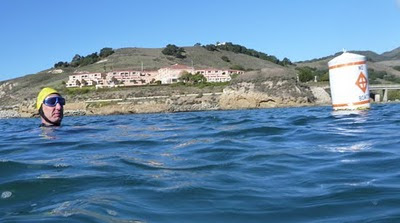 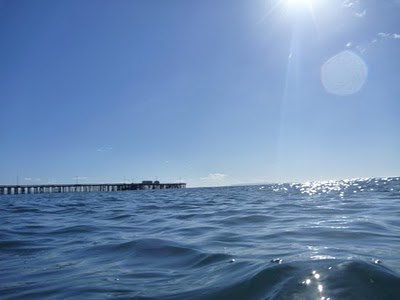 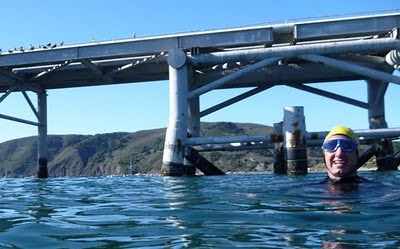 Posted by Swim Avila at 3:01 PM No comments:

If anybody is interested in a swim this Thursday or Friday let me know! I'd be interested getting in on either day or even both days if anybody else wants to swim. Shoot me an email if you want to go!
Rob D.
rob@robaquatics.com
Posted by Rob D at 7:07 PM No comments:

In spite of the occasional showers ti was sunny and warm(ish) at Avila beach today at 10:30. There was very little wind and the waves were small but coming in in rapid, bunched up sets. The water temperature was 55 and there was no sign of silt in the water from Saturday's rain. . There was one pelican making a few dives out near the end of the pier. The only other birds I saw were roosting on the jet ski dock. There was a short dozen boogie boarders in the water trying to milk a ride out of the mushy Avila waves. No one else showed so I hung out and enjoyed the sun and watched the boogie boarders. Of the group that was directly in front of me there was one young woman who got out, shed her wetsuit and got back in. She was still in the water 40 minutes later when I left. I wonder if she is a swimmer?
I'll be back next Sunday for a post turkey day swim.
niel
Posted by Swim Avila at 1:16 PM No comments:

Rob and I managed our second week day noon swim today. The weather looked less than promising in the morning with fog and low clouds and a generally cold and winterly cast to things. I checked the Mr. Ricks beach cam at 11 and things didn't look too bad so I went ahead and headed to the beach. Avila was gray with low clouds or fog but almost unlimited viability towards the horizon. There was no wind or no surf and nothing else either on the beach or in the water. There was a raft of small duck like birds out towards the end of the pier and a large group of brown and white gulls on the sand on the beach to the west of the pier. I thought that they looked like they were waiting for a storm to blow in. The water temperature was 55.5 and the water had cleared up and looked real clean. Rob and I did a simple clockwise triangle swim; out to the buoy line, left to the last buoy, back to the end of the Avila Pier and to the last buoy at the creek. I this point I saw something white bobbing in the water between us and the beach so we swam in to investigate this possible pirate booty. It was an empty bottle of motor oil. I tossed it into the surf so it would get washed up on shore and picked up and we continued back towards the pier at the back of the surf line. The clouds had moved off while we were in the water so it was bright and sunny when we got out. We spent about 30 minutes in the water with nice swimming conditions and certainly no crowds or parking problems.
I'll be back Sunday. Rob will be in Long Beach doing some kind of water related playing.
niel
Posted by Swim Avila at 2:52 PM No comments:

The water was 56 degrees. There was no wind and it was sunny and warm. A flock of birds that looked like small ducks was resting on the water and there might of been one or two seals cruising about. Occasionally there would be a nice set of waves but it was mostly small stuff with no potential for play. We had a new swimmer join us today. Stephen is a Cal Poly student, is on the CP Tri team and found us through the web site. (Way to go Rob, you get free swims for the rest of the year!) He had done a few swims along the buoy line with the team and decided that he wanted to do more ocean swimming. Filling out today's squad was Sylvia, Chad, Niel, Kim and Rob. Rob and Chad were feeling a bit beat up and nobody else was feeling driven to hammer it so we did a short swim. We went out along the pier to the end. Turned right to the last buoy at the creek and returned along the buoy line and under the pier. At this point we had planned on grouping up and seeing if anyone wanted to go longer. There were no takers so we headed in to the beach.
The planning for the Avila Dolphins holiday dinner is commencing. We will be discussing plans next Sunday. Anybody got any ideas? All input is welcome.
New Years Day Swim - There will be a swim at 12N on Saturday, New Years Day and a pot luck lunch to follow. The route will be weather and opportunity dependent and will be finalized on the beach before the swim. Last year's route was popular so that is definitely possible. Let's hope for conditions like 2010; sunny and warm with glassy 59 degree water!
niel
Posted by Swim Avila at 2:43 PM No comments:

Niel and Rob Swim at Noon on a Weekday.
My first thought was to call this post 'Niel and Rob Do a Nooner" and give you all a chuckle but I decided (almost) to avoid the snickering. Rob had wanted to keep swimming more than once a week after the end of our Wednesday evening swims, so we scheduled one for this Thursday at noon and we both managed to show up! It could not of been a better day to sneak in a swim. The air was in the low 70's, the water was 56.5, there was no wind but some good sized waves and parking was easier. After we got out through the waves we continued straight out along the pier to the end, turned right and swam to the creek buoy. We came back along the buoy line to the pier and came in. We fooled around with the waves getting in and out, spent some time visiting at the stopping points and just enjoyed ourselves to the max. We are going to see if we can keep this going so listen in to the chat at the beach on Sunday and watch Rob's post and Facebook page. Fall and spring are usually when we have our best weather so if you can join us the conditions are likely to be some of the best we'll see.
niel 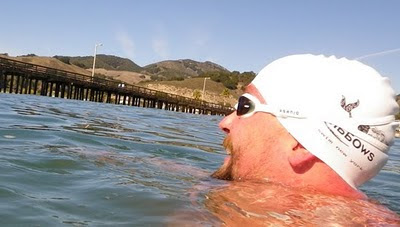 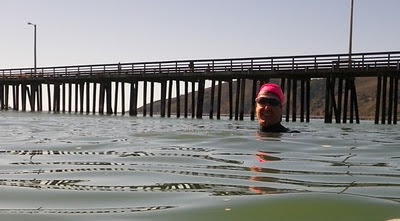 Posted by Swim Avila at 2:45 PM No comments:

There was no rain but no swimming at Avila Beach today. It was overcast with occasional weak sun, no wind or rain. The water was clean and 58 degrees. When I first arrived there were some 5'+ waves and a very messy ocean surface with little chops going in several directions. At 11 the surf had laid down, the water was getting glassy and the swimming conditions were very good but no one else had shown up to swim. Last weekend was the last one for the lifeguards for the season and none of the numerous dogs on the beach looked like particularly strong swimmers or I would have gone solo.
There are no more Wednesday evening swims so unless Rob and I get a nooner group going I'll be back next Sunday.
niel
Posted by Swim Avila at 2:24 PM No comments:

This was our last evening swim for the season. With the switch back to Standard Time this weekend it will be too dark to swim for those swimmers that can't leave work before 5. It was sunny and warm at Avila with just a bit of an offshore breeze. There has been very large surf, 12' to 16', earlier in the day on the west facing beaches. Some of that must of wrapped around into the south facing beach at Avila because the sand was wet up to the bottom of the stairs. All that was left at 5 was an occasional 5 to 6 footer. These were well spaced out so there was not going to be any trouble getting out. According to my replacement thermometer the water temperature was 58. The surf had dirtied up the water but I could see no birds, seals, fishermen or any other signs of potential company in the water. There were about a dozen boogie boarders down by the creek trying to wring out any remaining good waves. We had 5 swimmers; Rob, Pete, Ryan, Liz and Niel. We selected a short rout that would get us in before dusk and also avoid swimming directly into the glare of the setting sun. We went out to the buoy line and left to the last buoy. From there to the end of the Avila Pier and in along the west side of the pier. Rob, Niel and Pete did some attempted body surfing. The waves were all mush but it was still fun.
Rob wants to continue swimming during the week and is looking for interested parties who want to do a lunch time swim on Tuesdays or Thursdays. You can connect with him through his Facebook page.
niel
Posted by Swim Avila at 10:09 AM No comments: