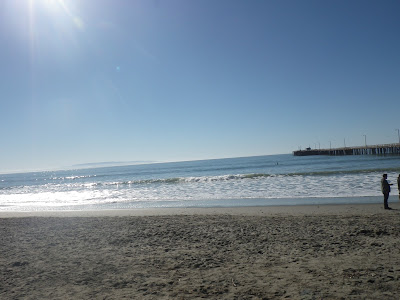 After almost a month storms (and very welcomer rain) of swims washed out by water loaded with debris and bacteria, we got a beautiful Sunday at Avila Beach. A lot of people must have agreed because the beach was crowded like a summer's day.  The port had been hauling off the accumulation of driftwood and trash but there were still acorns and walnuts on the beach that came down the creek and a black dusting of oil particles the large surf had tossed up from the ocean. The bottom had been recontoured so it was almost flat, I just kept walking out further until it was finally deep enough to start swimming.
Late week samples by Surfrider and the County had bacteria levels in the creek and ocean well below limits so we were OK getting in. There was a light wind that gave the water a little bit of surface action. Waves were 2 to 3 feet.
Getting in today were Niel, Heidi, Amy, John, Johnny, Sydney and Clara. The reported water temperature over at the port (about 1.3 miles to the west) was 55 degrees but as we waided in my toes told a story more like the low 50's. Heidi had her new thermometer watch so we had a reading during the swim of 51 degrees which seemed about right.  We swam out and down to the creek mouth, to the end of the pier and in for a distance of .91 miles.

Rain is predicted for late this coming week so swimming next Sunday is on hold until we see if the water stays clean.


We did not swim this Sunday. The recent storms had loaded up San Luis Obispo Creek with silt and bacteria so we stayed out of the water.

You can see all of the BWTF results at http://www.surfrider.org/blue-water-task-force/chapter/34. 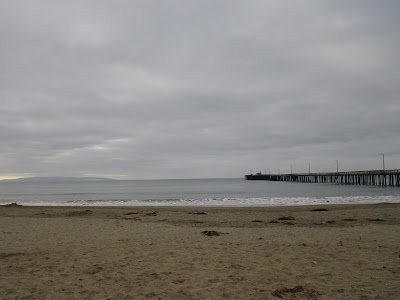