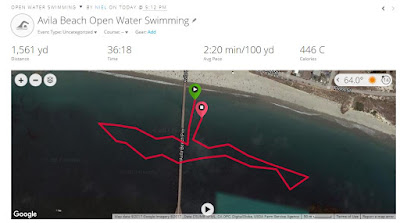 Maria, Jonny and I did a very casual and relaxing .9 mile swim at 6 PM. The water temperature was 61, the wind had died away and it was beautiful in the water. I had not done a Wednesday evening in a while and I'd forgotten what a great way it is to put the work day behind you. 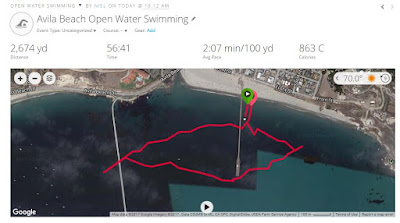 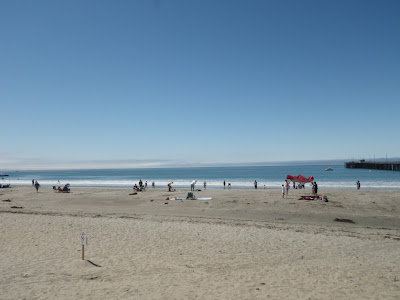 It was warm and sunny at Avila beach with an air temperature in the upper 70's and a water temperature of 59 degrees.  No wind to speak of, an occasional 3 to 4 foot wave and nice clear water. We had a nice crowd today; Niel, Sylvia, Duke, Dave Van Mouwerik, Steve, Heidi, Sydney, Katy, Maria, Jonny, John Hampsey, and Peter Kelly.
It was nice to see Dave VM. He joins us when he needs to do some ocean acclimation prior to an ocean swim, which are anywhere between 6 and 20+ miles. Steve is a friend of Dave's who was over from the valley and joined us. Katy is from Utah and is here for the summer. 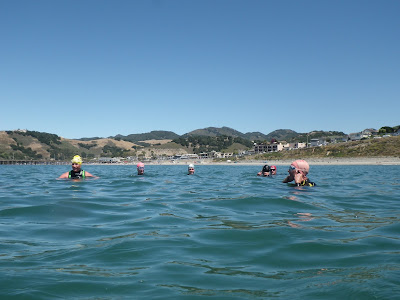 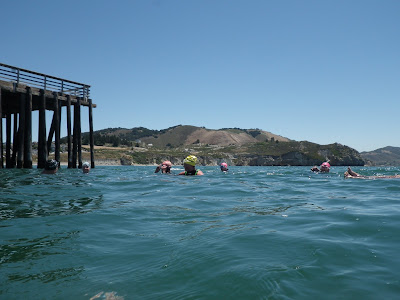 From the end of the pier we could head for the mouth of the creek which would end up being a 1 mile swim or head over to the Cal Poly Pier and come back which would be a 1.5 mile swim.  Everyone voted for 1.5 miles so to the Poly Pier it was.

From the C.P. Pier we swam back to the mouth of the creek, along the buoy line to our starting point on the east side of the Avila Pier and came in. I had 1.52 miles. Dave and Steve did an additional 1/2 mile along the buoy line. 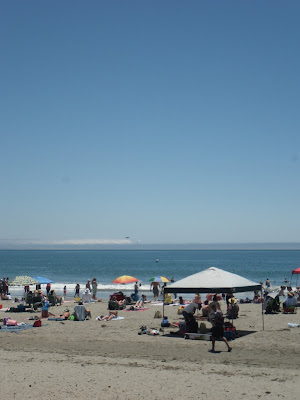 Steve Snyder and Nan joined us after the swim. The had come to the beach to watch the launch of a Falcon9 rocket from Vandenberg at 1:25, so I hung around. The launch was to put 7 (?) or 9(?) communications satellites into orbit. This photo is just after launch. The flare from the rocket is just above the gray line of clouds on the horizon and to the right of the white clouds. I think that the dark object above the white clouds is a bird. 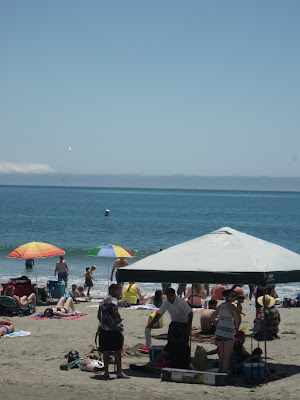 You can see the flair of the rocket clearly in this picture.  Steve had some powerful field glasses and he could see the body of the rocket. 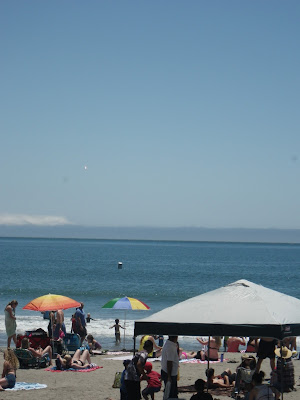 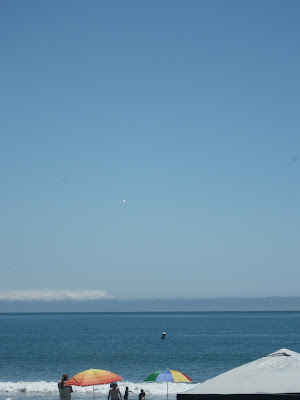 I lost sight of it when it was double this distance above the horizon. Just after that Steve saw the separation of the first stage and we began to hear the roar of the rocket.

There will be a swim this Wednesday evening. In the water at 6. We'll see if we can keep this going this summer.

Next Sunday we will plan a 4th of July Swim. Details will be in next Sunday's post.


Our First Wednesday Evening Swim of the Summer! 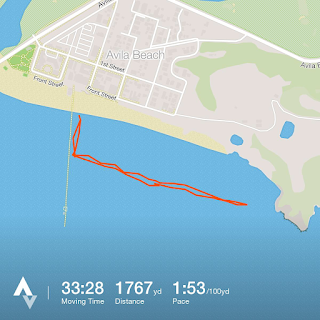 Wednesday Evening Swim, Johnny & myself had a nice chat (he has some most excellent travel stories) as we waited for anyone else who might show. Brenda, Amelia rocked up & that became our group of participants. Very nice weather on the beach and with no one having swam to the point, that became our route. Very minor surface chop with the temp being somewhere around 58°.As we regrouped at the point I described the course for the Triple Martini. (we think Brenda took it to heart, since her direction looked like she was going to attempt it right then and there :) All in good fun. A very successful swim with the ladies following it up by adding a hike directly after.  See y'all Sunday.Have Just a Magic Day !Duke
Posted by Niel at 5:51 PM No comments:

I was out of town so this week's post if provided by Duke.

Pretty much perfect conditions for the Sunday Swim and at 10:58am and it was just ..... Duke. (Angela had dropped him off crutches & all). Then Sarah rocks up extremely  pumped to get in (fresh from Alcatraz Tri. where they had canceled the swim). It was just her and I ready to head out when two more ladies walk up that had seen the post on Facebook wanting to join in. (Brenda & Amelia). Sarah elects for a group photo and we head into the water. It seems about 55/56° and a bit rough. We had elected to swim the buoy line where the ladies are introduced to the word  "Maytag Swim" but they handle it great.  Upon returning back to the first buoy there sits Johnny with the comment "Duke, I think this is the first time I've ever beaten you to the buoy" (good laughter). He then joins us under the pier to the last buoy on the other side. A return to the beach with the ladies and Johnny completes swimming as we did solo. A very nice Father's Day Swim for all.

On a side note, it's looking like 4 of us are planning this Wednesday afternoon a 5:30 PM Swim. Any & all who are of interest would be more than invited to join.

Have Just a Magic Day !
Duke 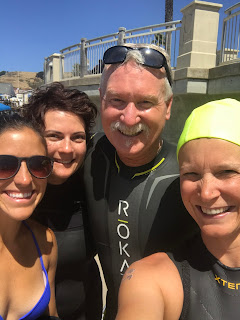 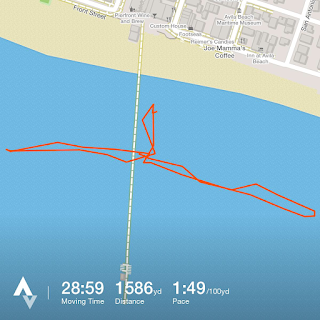 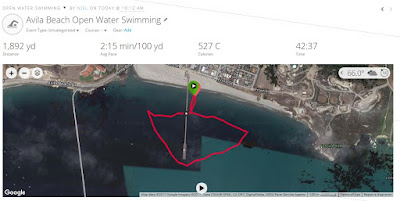 Niel, Jonny, John, Jim, Maria and Pete swam today. There was a strong breeze out of the SW and whitecaps on the windward side of the pier. The water temperature was 57 degrees. Pete did his own swim. The rest of us did a triangle counterclockwise. The direction of the four legs of the swim relative to the wind and chop would  be; into, across, with and into.

It is nice to have the water warming up. We'll start thinking about some longer swims now that conditions are more comfortable.

Neither John nor I will be swimming next weekend. If someone will take some notes and forward them to me I'll get them posted.

A Beautiful Day But Possibly A Bit Sharky

We has a beautiful day at Avila Beach today; no wind, clean and 54 degree water, flat conditions, just beautiful for swimming. The only issue was that there were baitfish gathering offshore which were attracting birds and a party boat which came in close to the end of the pier to give the anglers on board a chance at the larger fish that would be below the bait fish. The larger fish attract seals and sea lions which are popular shark food. There had been no sightings but it is prudent to avoid an area where all of the other animals swimming in the water are either having lunch or are on the menu. 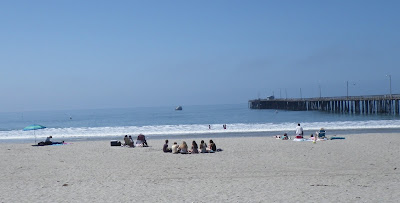 So, we decided to stick to the buoy line.We would start out buy swimming down to the mouth of the creek and work out the exact route and distance from there. 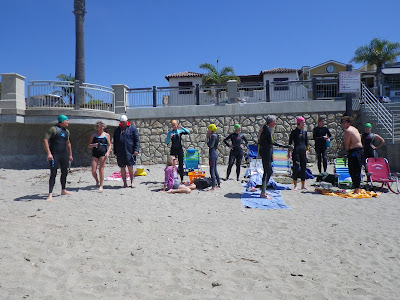 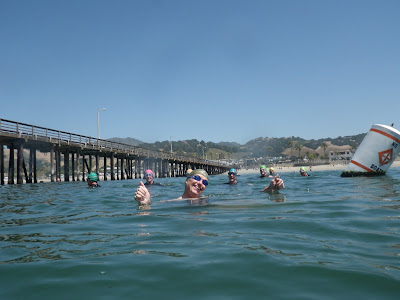 This made for a nice crowd out at the first buoy, 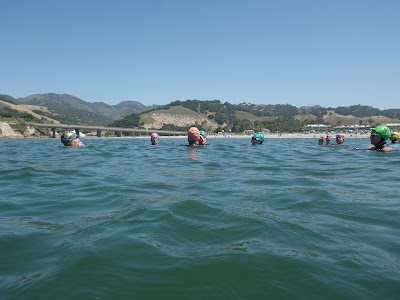 and at the creek mouth. 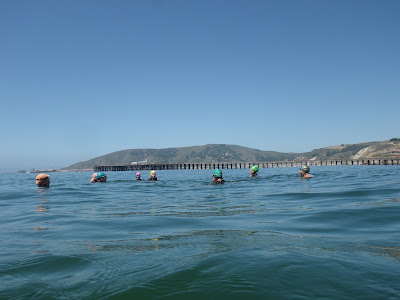 From the creek mouth we swam to the last buoy on the other side of the pier, 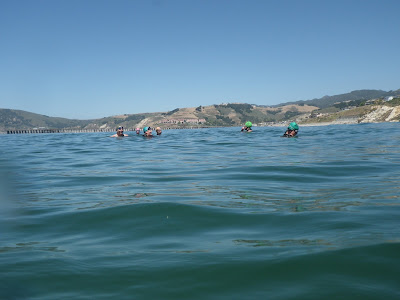 and then further on  to the far end of the beach near Fossil Point where we turned around and headed back to the pier. 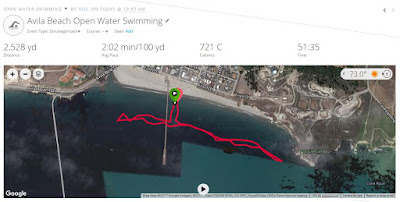 A big smile  😉 and a 'hang in there'  to Duke who forgot to keep the rubber side down last weekend, crashed on his bike and has a badly bruised hip. 🚲  Nothing is broken and I understand that everything will heal except his pride. ♿