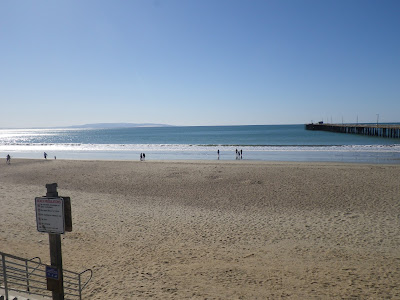 The beach was empty but Avila was just beautiful today. A gusty offshore breeze gave us a clear blue sky, the ocean was flat with knee high surf and if you got close to the seawall and out of the wind it was nice and warm. That offshore breeze had pushed the water temperature down to 50 to 51 degrees, making this the coldest water temperature that we have seen since last April.
I had surgery on my knee on 2/20 so I'm beached for a bit but Heidi, Duke, Karen, John and Jonny were here to swim. Their route was out to the end of the pier, over to the single buoy on the reef, which is the only one we have to swim to in the winter and doubling back for a total of just under a mile. Everyone thought the water was extra chilly but that the sun made things more comfortable than last weeks stormy conditions. 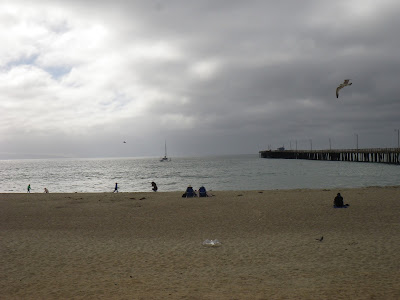 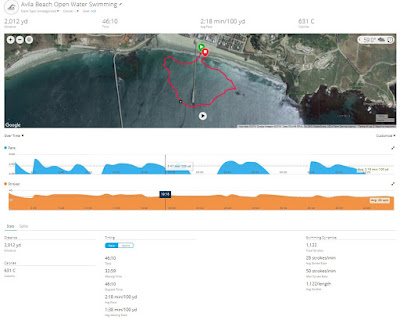 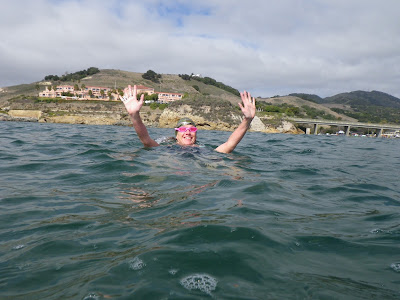 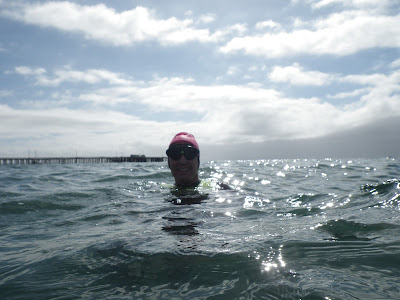 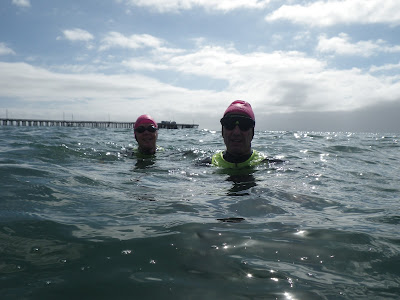 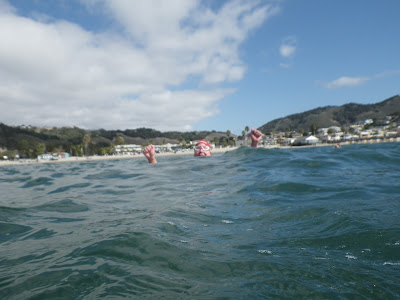 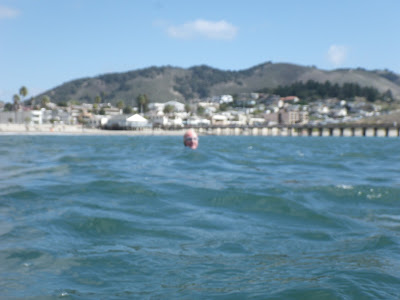 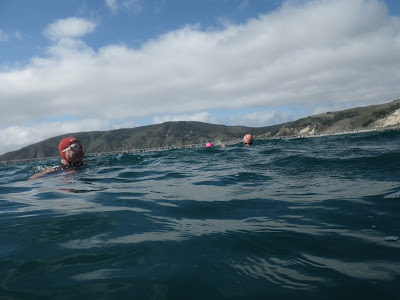 We enjoyed a most excellent swimming day at Avila Beach.
It was pleasantly warm, sunny and calm. The water was clear and 54 degrees with knee high surf. We enjoyed last Sunday's route so much that we decided to do it again today: out to the end of the Avila Pier, over to the Cal Poly Pier and back to the starting point for a mile plus swim that provides two 600+ M legs where a swimmer can stretch out. 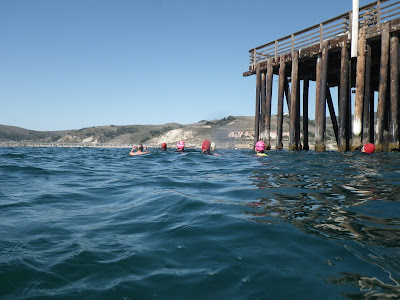 We are at the end of the Avila Pier where we found that there was a bit of a chop running out of the SW. Tom, yellow cap in the middle, is providing directions to our destination point along the Cal Poly Pier. From the left that is Sue, Evan, Karen, Kurtis, Tom, Heidi and Jonny. 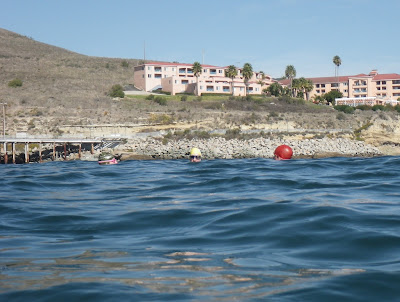 I caught up with Sue, Tom and Evan at the Cal Poly Pier.
They pushed on to the Avila Pier while I waited for the rest of the group.

After we got out and were at the showers a fog bank quickly rolled into Avila Bay all of the way to the surfline, reducing visibility to a quarter mile, then 30 minutes later it just as quickly withdrew to a point about a mile offshore. I've never seen that happen before.

Sunday was an absolutely beautiful day at Avila Beach no matter what you wanted to do. It was sunny, calm and warm but still cooler than in town. The water temperature at the pier was 55 degrees and the water clarity was close to the best that I have ever seen here; I could pick out individual shells on the botten in 10' to 15' of water. The surface was flat with 2 to 3' waves. 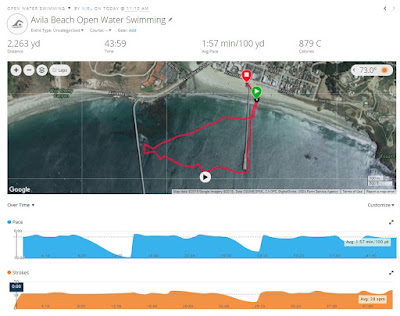 Today's route was 1.3 miles; out to the end of the Avila Pier, over to the Cal Poly Pier and back to our starting point.  Swimming today were Niel, Heidi, Amy, Tom, Sara, Chris and Jonny.  Today was Chris's first swim with us. Chris and his wife are relocating to San Luis Obispo from the Seattle area. 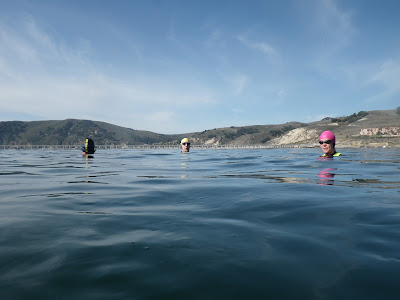 The back of Chris's head, Tom and Heidi at the end of the Avila Pier.

The 55 degree water temperature was questionable,
so Tom had us vote for above, at or below 53.5 degrees. 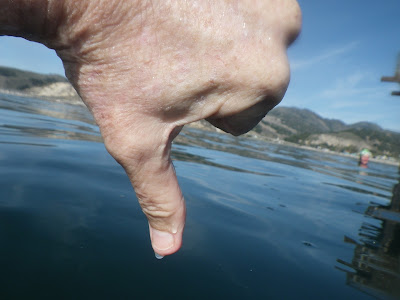 Tom's vote. Note: he is the only one wearing a Farmer John today. 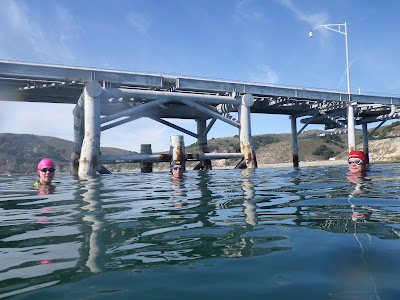 Heidi, Chris and Jonny at the Cal Poly Pier.
Tom was off the front in order to keep warm.
Amy and Sara took a shorter route back to the beach.

If you are interested in the water quality at SLO County beaches take a look at
http://www.surfrider.org/blue-water-task-force/chapter/34.
I'm the program coordinator for the local Surfrider Chapter's Blue Water Task Force program. My volunteers go out every Thursday morning and collect water samples from creeks and beaches that are tested for the presence of Enterococcus bacteria. Enterococcus is the EPA's lead indicator for the presence of human waste. Our results are posted about midday Friday at the web address I provided above.