Tom and Brian and Niel and Russell's Fabulous Adventure

The route was 2.43 miles. It was sunny and calm with very good swimming conditions.
The water temperature was 51 degrees. Niel was accompanied by Russell on his paddleboard and Tom had Brain with him in a kayak.  Tom finished in one hour, Niel finished in 1:17:39. 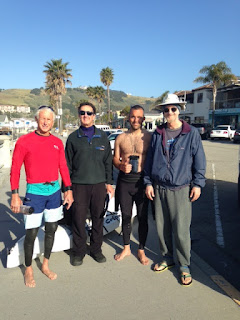 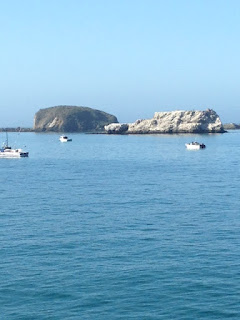 Our destination.  Smith Rock is to the west of the Harford Pier, inside of the breakwater. It is the white poop covered rock. The larger rock in the background that is part of the breakwater is Whaler's Rock. 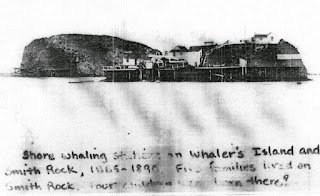 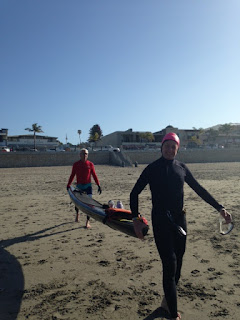 Getting started just before 9 o'clock. 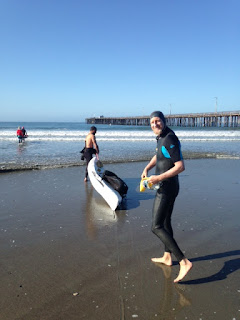 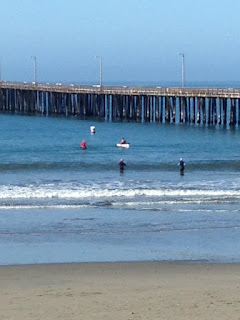 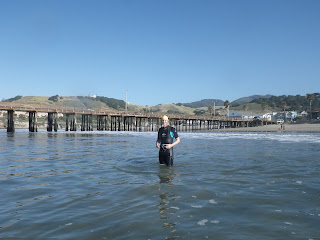 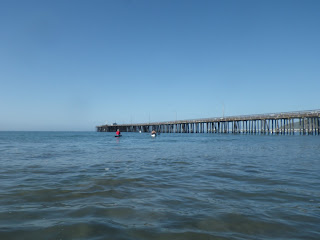 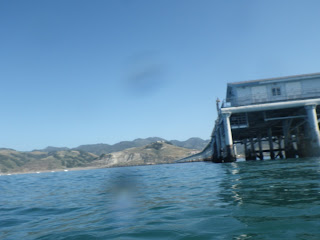 I'm at the end of the Cal Poly Pier 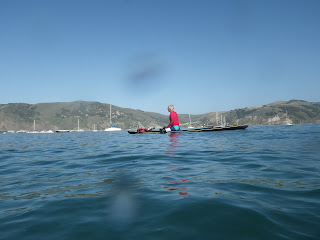 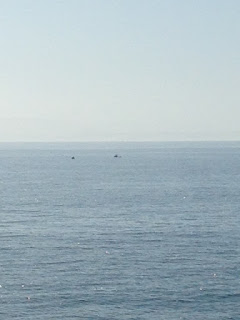 Leslie took this one from the Harford Pier. That is Brian having just passed a buoy.
Tom is there somewhere. 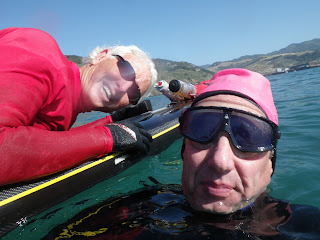 Russell and I at Smith Rock. 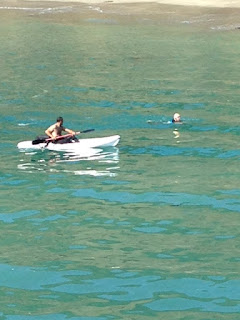 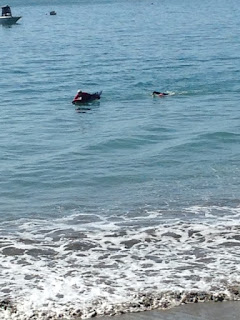 Russell and Niel at the finish

The swimming conditions were flat and windless with clean but cold water.  I didn't notice any change in the water temperature during the swim.  During the last leg from Smith Rock to the get out we had some counter currents, surge and swell from the waves that were rebounding off of the cliff face to our left. The wind started to pick up shortly after we got out.
Thanks go to Tom for mothering this swim into reality and to Leslie for shlepping our stuff over to the port and for taking a bunch of pictures.

I was out of town so here is today's swim report from Tom Lorish;

Niel, here is my blog report for Sunday April 24th:Blog report from TOM:Apparently The Man in the Gray Suit was in town… Saturday… a credible sighting. (I could not find this in the Tribune Tom, what was your source?   niel),   Of course, The Man in the Gray Suit lives out there, right?  Hmm.  Food for thought… or more precisely, thought about being food.Anyway, it was a beautiful day at Avila – a little bit of a breeze, a few scattered clouds, warm, but not hot.  Swimming today was Duke, Jim, Roberto, Nicole (? – I may have this wrong), John Hampsey, and Tom.  The group swam out to the first buoy and went left towards the point.  We met up at the last buoy on that side and back down the line to the creek mouth buoy on the other side of the pier and back in.  The traditional buoy line mile.  A metric mile if Duke’s wrist device is accurate.  A good swim on a nice day.

NOTE:
Beginning Wednesday, April 27th, Dave Van Mouwerik will be competing in the 2016 SCAR swim in Arizona, swimming forty miles in four lakes in four days.
http://www.scarswim.com/home.html
Besides the event website there should be event posts on social media, but I do not know which forum.

Dave - Best of luck and success and have fun. 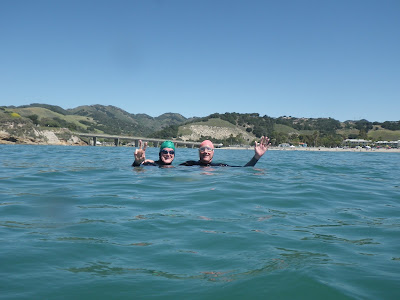 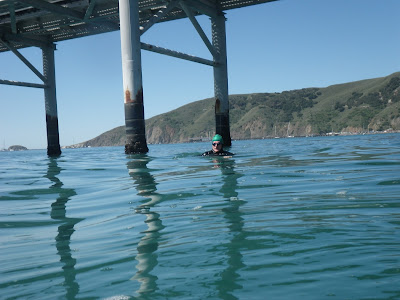 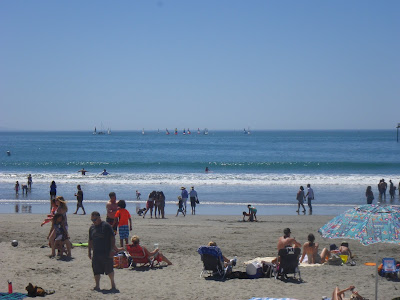 I had a meeting and was unable to swim so todays report is by Tom Lorish. .

“The Port San Luis buoy was 56.5 this morning.  Niel would say it it’s 54.5 though.”  That was Pete before we got in the water.
It was a cooler spring day at Avila today.  Mostly overcast with the sun peeking through every now and again.  As the lifeguard pushed the “No Dogs” sign into the sand, the water temperature conversation continued with the arrival of another swimmer.
“I heard it was cold last week, what is it today?”  It was cold last week.
Swimming today was Rick, Duke, John Hampsey, Tom and Pete.  The group headed out along the pier to about the halfway point and turned left towards the reef buoy.  Pete did his own thing.
“This is definitely warmer than last week.  I’d say 54-55.”  That’s probably right.
After gathering at the reef buoy, the group swam to the end of the pier and around to the creek mouth.  At the various gathering spots, Rick told a story of a serial cheating Iron Woman.  “Why would she do that?” someone asked philosophically.
“She claims her dog ate her chip on two of the occasions, and that her race number fell off on the other.”  Hmm.  Seems like a stretch.
“Let’s keep swimming; I’m getting cold.”
From the creek mouth, we swam back under the pier and in.  I’m not sure of the time or the distance – probably about 40 minutes and 1.15 miles.
“Those guys don’t know what they’re f****ng talking about”  That was Pete again – after the swim.  He had swum by the lifeguard training boat.  They told him their thermometer read 51 degrees.  He was appalled at this ridiculous notion.
This is what I can tell you:  The water today was in fact warmer than last week, but cooler than it’s been in the past.  That’s what I know.
As I was leaving, a couple folks were coming down the stairs.  I overheard one say to the other, “What do you the water temperature is?”
TOM
Posted by Niel at 3:03 PM No comments: 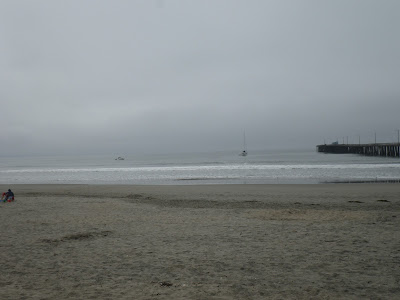 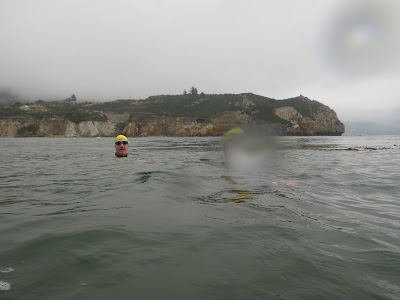 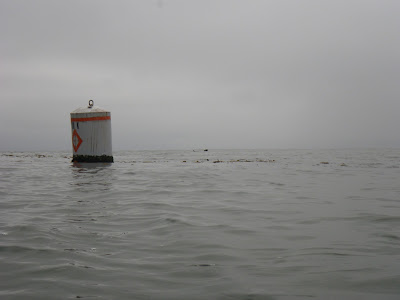 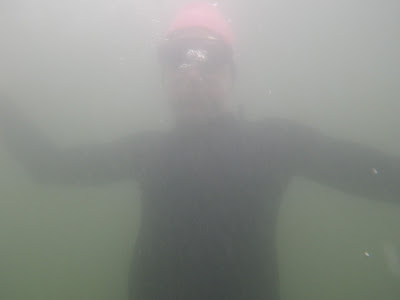 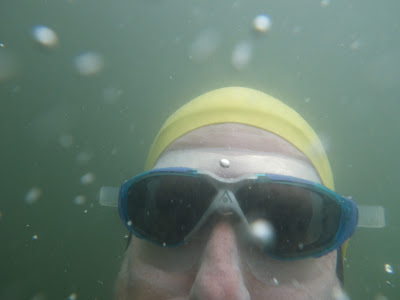