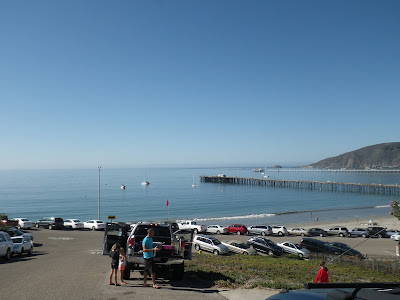 At 10:15 Avila Beach was warm, clear, sunny and flat. The water was 65 degrees. In September of 2013 the water temperature was 55 degrees. It is going to be difficult to get reacclimated once water conditions return to a more typical temperature.

Swimming today were Niel, Lloyd, Sylvia, Amy, John Hampsey, Leslie, Tom, Nicole, Daniel, Dale and Pete. There were two jet skis jumping the surf at the east end of the beach so we stayed inside the buly line in the no boat zone. We had a lot of different abilities and interests today and wound up doing 4 or 5 different routes.  Just as we were wading in a single seal stuck his head getting inside the surf line. I guess that he was just curious as that was the only time I saw him. Tom, Lloyd and I did a lap of the buoy line. The wind started to pick up during the second half of our swim but the chop never got too large. 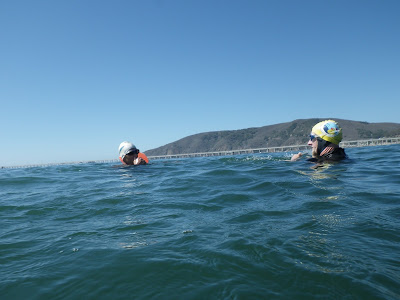 Tom and Lloyd at the creek mouth.

Swimming today were Dharmesh, Niel, Pete, Sylvia, Amy, John, Marcus, Damion and Gerry Gross. We enjoyed very warm water - 67 to 70 degrees and flat conditions with building chop. No signs of big fish.  Everybody did some variation of the buoy line.

It is going to be very hard to recover from this summer when water temperatures return to a more normal 55 degrees but we'll enjoy it while it lasts. 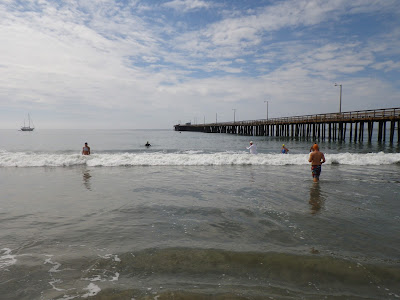 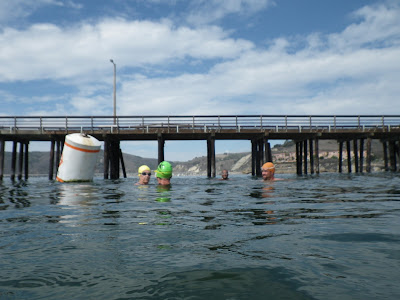