Today was a perfect fall day at Avila. There was no breeze at 11 and it was actually hot up next to the wall making it hard to get into my wetsuit. The water temperature was 60. There were some scattered pelicans diving for fish out beyond the end of the pier but no other feeding action. Our friend the large black dolphin and friends are still around cruising the surf line. Rob, Sylvia and I swam and everybody came out smiling. Today is the last day we will have the life guards on hand. Sylvia and I thanked them for keeping an eye out for us this summer and invited them to come back next weekend and swim with us. 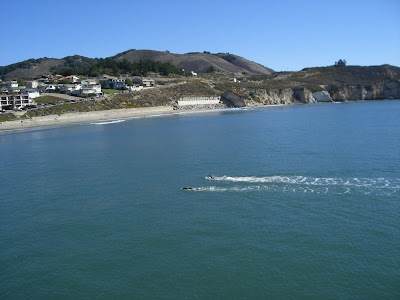 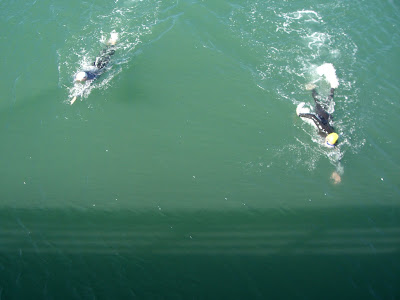 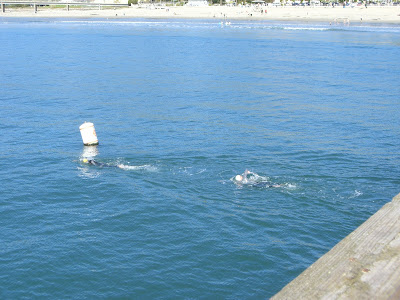 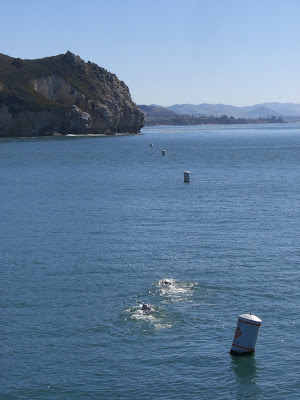 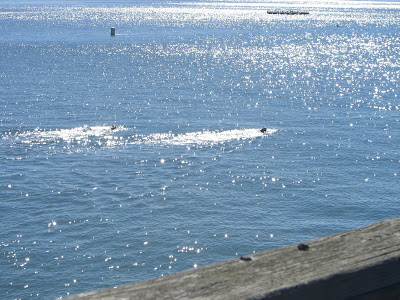 If you want more pictures from today you can see them here
Posted by Swim Avila at 1:40 PM No comments:

I was sure surprised some of the conditions at Avila today. The air temperature was comfortable but there was heavy overcast and fog with very light winds. The surprise was the water temperature at 61.5! The water was very clear with no sign of silt from the creek and what wind there had been died and the slight chop laid down as we were getting ready to swim. The fog obliged by staying up high so we had plenty of visibility. Rob, Gary Cushing and I spent about 33 minutes swimming the triangle route clockwise in very nice conditions.
Both Gary and Rob are racing next week, Gary at the 1/2 iron tri in Santa Cruz and Rob at a 25M pool meet at UCLA. I believe that Duke and Angela are doing the Catalina triathlon that same weekend. I'll be at the beach.

niel
Posted by Swim Avila at 4:18 PM No comments:

Other than being gray and overcast, the swimming conditions on Sunday were about as good as it will get at Avila. It air was completely still so the surface of the water was glassy. There was no current, the water was clear and 57 degrees. The shore break was knee high. There was a huge raft of sooty shearwaters about 1+ miles offshore but they were just sitting on the water, not diving or feeding. There were 8 seals that were moving around the bay but they were more interested in playing than feeding. Our friend the big black dolphin made a pass along the beach 1/2 way inside the buoy line with two friends in tow. The life guards are here until the end of this month. Duke and I swam the triangle route counterclockwise, Angela enjoyed the beach and Kris rode her bike. The sun came out about the time were were getting out of the water.

niel
Posted by Swim Avila at 9:29 AM No comments:

It was very windy at Avila today. There was hardly anyone on the beach but the lifeguards were back. They may be with us through October but it will depend on the number of people on the beach. The wind and fog has helped the water temperature slide down to 57. It was sunny and would of been pleasantly warm without the wind. The water was still clean with an occasional 3 foot wave. The wind chop was head high with only occasional whitecaps. There was one seal, a few pelicans and the same big black solo dolphin that was cruising the beach last Sunday. Sylvia stayed on the beach and I swam the buoy line. The chop required some adaptation to my breathing timing and stroke to find the most air but once I got it figured out it was just a matter of doing the work.
It is supposed to be warmer late in this coming week and over the weekend.

Duke and Angela were doing the LA Tri and Rob was at a pool swim meet in Northern California. How sis you guys do?