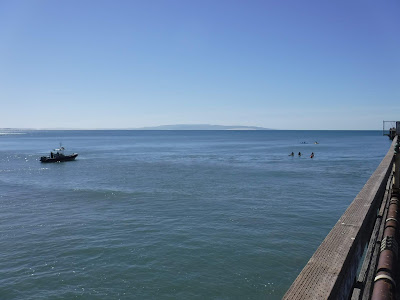 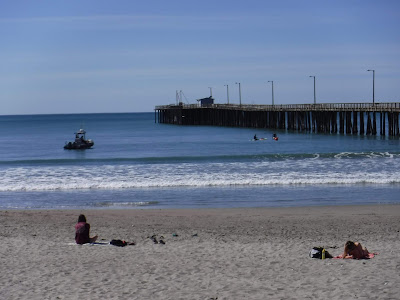 We had a perfect spring break day at Avila Beach; sunny, warm, an offshore breeze, small surf and flat, cold water. The beach was not crowded at 10:30 but by 1 PM it was packed.
I recorded a temperature of 53 degrees in the surf line from the pier and there was a 2+ degree drop when we got out past the waves. The lifeguards are back for the start of the season and were do some training near the pier when I arrived.

Swimming today were Niel, Tom, Jim, Teresa, Heidi, Amy, John, Jonny, Duke, Marguerite and Maria.
Niel, Tom, Jim and Teresa got in first and swam to the end of the pier then parallel to the beach to Fossil Point and then doubled back along our outgoing route. We covered 2.33K or just under a mile and a half.
The second group swam out to the end of the pier and over to the buoy at the reef and doubled back. This was about one mile +/-.

There is a chance of some rain or showers next Thursday but I'm hoping that it will not keep us from getting back to our regular Sunday swims. 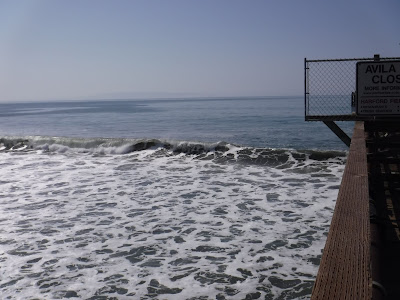 Avila Beach was sunny, about 70 degrees with no wind and occasional 4 to 5 foot waves. I measured 53 degrees off of the pier in the surf line, it was 2 to 3 degrees colder past the break.
On the beach today were, John, Jonny, Amy, Niel, Tom and Jim.  Tom, Niel and Jim got in first and swam to the end of the pier, over to where the last buoy would be and retraced our route back for a total of just over a mile. Getting in and out through the waves required some timing to avoid getting washing machined. John, Amy and Jonny swam out to the end of the pier, about 300 yards toward the last buoy's location and in to the beach. The water was cold everywhere but noticeably colder next to the pier. 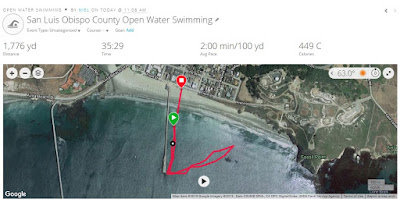 Sunday   March 17, 2019
After being mostly empty for months, the beach was crowded as if it were a June day. The lifeguards were back. The air was warm, with full sun and a light breeze. The ocean rolled in with steady sets of 3 foot waves. Beyond the surf line, the sea was generally flat, but with hypnotic undulating swells. The lifeguard said the ocean temp was 51, but farther out it dipped toward 49. The water was remarkably clear and pristine, and we all sensed the swim was going to be fantastico.
13 entered the water and eventually broke into two groups. Group A swam to the end of the pier, then back-tracked before heading south to Fossil Point. That group included Duke, Phil, and seven others. Group B—Amy, Maria, Jonny, and myself—headed to the end of the pier then swam diagonally SE to the reef buoy. Short of the buoy, for no particular reason, Jonny and Maria and I relaxed on our backs in a Buddha float. Toes in the air, face in the sun, eyes closed, we forgot where we were and who we were. Amy, unwittingly at first, swam into the Buddha halo and joined in our mesmeric back float. Time passed without measure... ... before we finished our swim back to the pier and the beach where it was hot water funneled down the wetsuits for all, followed by coffee and camaraderie on the noon beach.
Swim A – 1.2 miles   Swim B – .9 miles 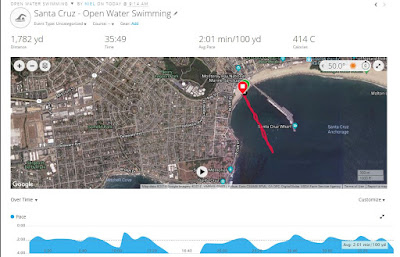 Stephanie Roberson and I did our Will Swim For Food swim today. We were swimming with the Sunday Morning Santa Cruz Pier Open Water Swim Group. The route was a 1/2 mile out and back for a mile total. It was a beautiful morning. The air temperature was 49 degrees at 9 AM with a water temperature of 51 degrees. There was no wind, a slight swell and small waves breaking on the beach. The water looked nice and clean. The Sunday group has a paddler who accompanies the swimmers and sets the turnaround point.  After a 3 hour drive getting in the water was especially nice.


Hi, I'm Niel, I'm an ocean swimmer and I haven't been in the ocean in six weeks.

Yikes! That what it felt like today, the first Sunday in a month and a half when I was both in town and it wasn't raining. The rain itself in not a problem but every time we have had a storm it has pushed the bacteria levels in San Luis Obispo Creek and Avila Beach out of the comfort zone. We had rain this past week on Wednesday/Thursday and Saturday night.  104 is the State of California's upper limit for safe contact with the water and this past Thursdays samples tested in the 1000 to 1100 range.  10X over the safe limit is too risky for me.

It was dry(ish) this morning so went to the beach just to sit in the pale sun and to listen to the ocean. The water temperature was 53.5 and the water was silty.

Next Sunday is looking like a swimable day. If it is, I won't be at Avila. Stephanie Robenson and I will travel to Santa Cruz to do the Will Swim For Food around the Santa Cruz pier. This fundraiser for local food banks was scheduled for Sundays in January and February and this is the first opportunity that the water could be clean enough to get it done. 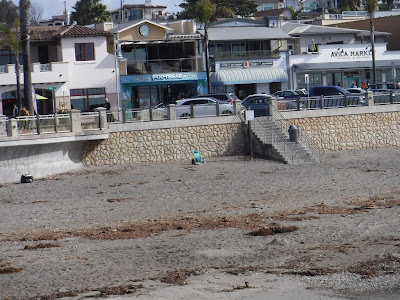 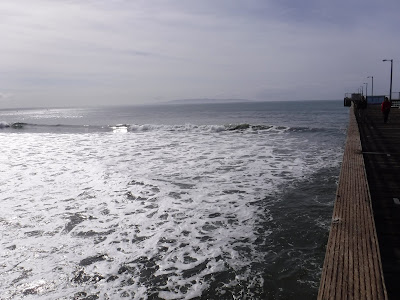 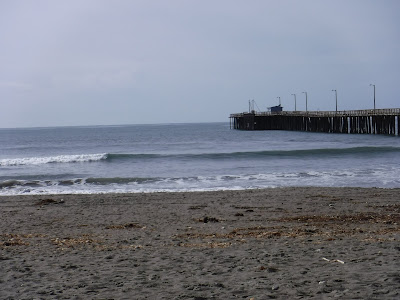 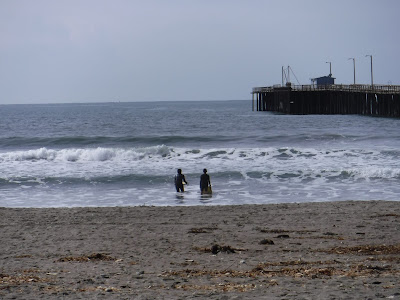