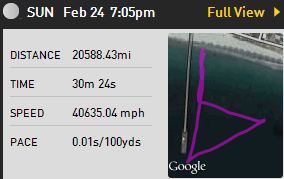 Look closely at the GPS plot of today's swim and you will see that we covered over 20 thousand miles in a half-hour. That is a 0.01 sec per 100 yard pace!  Pretty impressive.  If this holds up the IOC may forget about speed suits and just drop the official pool temperature to 49 degrees F as that is what we had today.  It was sunny and warm on the beach but there was a light breeze that kept changing direction.  There were also some 4' to 5' sets separated by moderate waves.  On the beach today were Sylvia, Yvonne, Niel, Duke, Ed, Ruta, Rob, Byron and Sharley.  Allison was with us with her new kayak but not technically on the beach since she  decided that it was prudent to launch over at the port and not buck the waves.  Ruta did launch from the beach in their inflatable kayak and made it in and out successfully.  We decided to swim on the left side of the pier because the cold water was making a short swim look attractive and to avoid the water near the creek.  Sylvia and Yvonne swim traditional style and didn't see the attraction in getting in.  Rob swims traditional style too but he has a younger persons stranger sense of fun.  We swam out, turned left and swam parallel to the beach down to the end of the sea wall.  From there we headed towards the end of the Avila Pier.  By this time the wind had settled in the W-SW and had pushed up a nice little chop which we were more exposed to the closer we got to the pier.  This leg finished up with some nice open water swimming, working the chop and current to find an even pace that would allow you to not swallow too much water.  We came in along the length of the pier, getting out about a half hour after we started.  We probably covered about .8 of a mile. 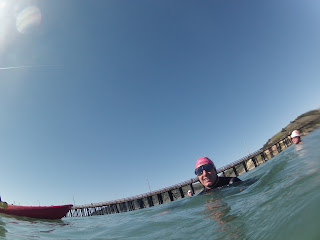 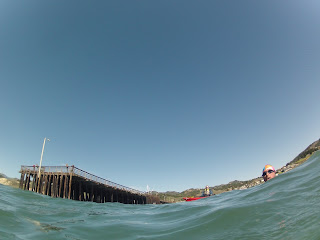 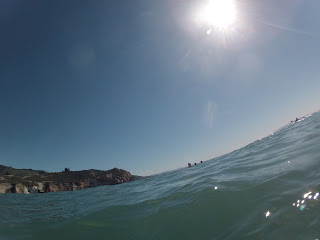 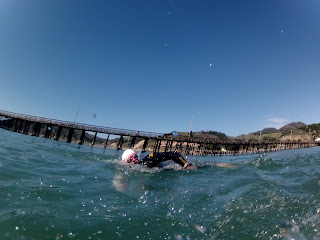 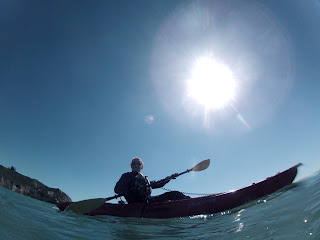 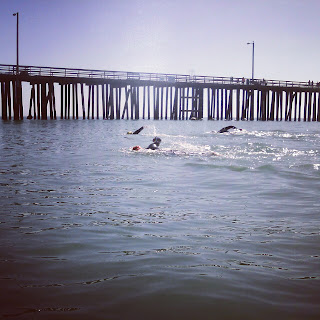 We shifted the swim to Lopez Lake today.  Friday evening, after the Surfrider's meeting in Avila Beach, Rob noticed a strong sewage like smell along the beach from the creek to the pier, so we decided that an alternative venue was a good idea. Niel, Rob, Allison, Byron and Sharley  gathered at Cottonwood Cove before 11 and tried to come up with a plan for a swim.  It was complicated.  First, it was nice and sunny and calm but the water temperature at the dock near the launch ramp was 50 degrees.  Yikes!  I'd never been in the lake at this time of the year and to have it that cold was a surprise.  Second, as we were getting ready Byron remarked that there was a boat in the area where we were planning on swimming that was setting out buoys for the start of a sail boat race.  What followed was a conversation about how to avoid the boats.  Swimmers would have the right of way but that was not something that we would want to rely on.  Byron was confident that the sail boats would want to stay away from the shore in order to keep in the breeze, but I wondered how many boats would be piloted by novice sailors.  The solution was to stay close to the shore and I wound up towing a inflatable swimmer's buoy that
Rob had.  Getting in was tough, especially for the wetsuitless Rob.  Byron was not happy about the temperature either.  He and I decided to take a short loop out and back to the point to the west while Rob was acclimating.  We grouped up and headed to the north intending to swim to the far side of Mallard Cove, the next cove up the shore.  By this time there was a couple of dozen small sailboats of various types maneuvering around the buoys.  We crossed Mallard Cove and based on the cold and all of the boat traffic we decided to head back.  A light wind had come up and put a small chop on the water that we had to work into as we swam south along the shore.  We got out at our entry point having covered approximately 4000 yards.  It wasn't until now that Rob mentioned that the swimmer's buoy that he had given me to increase our visibility in the water was the same color as the buoys for the boat race, and perhaps instead of increasing our safety it had served to make us (me!) a moving target.  I'm glad that we are all looking out for each other.  We were wise to get out when we did.  Afterwards I sat in my car eating lunch and watched the boats.  They were all over the lake, deep into Mallard Cove and back and forth across the route that we had taken.

If you missed out on the last minute planning for this swim you should join the Central Coast Open Water Google Group.  All of the last minute planning for our swims takes place here.  You can go to Google Groups, find the Central Coast Open Water site and ask to join.  Rob is the gatekeeper.  Or you can contact Rob directly and ask to be added to the group. 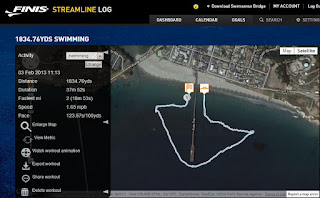 We had combined winter and summer conditions today; the water temperature was a wintry 52 degrees and the sky was all summer fog and low clouds.  The morning gloom looked like it was starting to break up when I arrived at the beach but within a half hour conditions had reversed, the fog had thickened and actually would gradually increase while we were there.  The tide was very low and there were sets of head height waves.  Niel, Brad, Byron and John were swimming, Charly was going to go for a run and Sylvia and Yvonne were going to stay on the beach and enjoy the big thumps the large waves would make when they closed out.  We decided to do the traditional triangle route with no thoughts of trying to swim under the pier today!  Nobody liked the idea of getting burrito wrapped around a barnacle encrusted piling by the surge.  The Harbor Patrol has pulled out the buoys for the winter so our navigation is a bit more approximate and the plot tells the story.  We covered just over a mile in 37 minutes.  We had a wide variation in speed amongst the four of us so we didn't stick together in a group and without the buoys the idea of meeting 'where the end of the buoy line was' left us a bit spread out at the end of the first and third legs, so we spent some additional time getting regrouped.    While I was taking the temperature I had seen a large otter floating on its back in the surf line on the west side of the pier and before we got in there had been several sea lions and possibly a dolphin working a patch of ocean near the end of the pier.  Byron and Brad had a dolphin swim between them on the leg from the end of the pier towards the mouth of the creek!  Coming back in was uneventful for John and I but Byron and Brad took an earlier wave and got run through the spin cycle.  Nobody lost anything and we all had a good swim.  The gloom was getting thicker after we changed so no one hung on the beach.  There was bright sunlight at San Luis Bay Drive, just a few blocks form the beach.