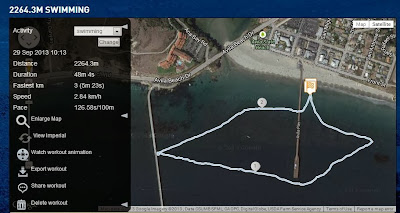 We had beautiful swimming conditions today.  It was sunny, warm and calm with flat seas and 55 degree water.  We have not seen 55 degrees since the spring so we are moving into fall swimming conditions.  Sylvia and Lisa, who is a friend of Rob's and a regular with the Monterey Kelp Krawlers, swam along the buoy line.  Rob joined Niel, Byron and Rick to the east end of the buoys and doubled back.  We swam to the end of the Avila Pier, over to the Cal Poly Pier and back along the west end of the buoy line.  We covered 2265 meters or 1.4 miles in 48 minutes.  There were some temperature drops of several degrees that kept things interesting. The wind started picking up when we settled back into our chairs so our timing had been just right.  Rhonda and Sharley joined us for the post swim discussion of yesterday's riding, who was racing where today and plans for this coming week.

Brad and a couple of friends swam the buoy line.  It was very wind, lots of chop and cold water. The water at the port has been 53 - 54 degrees over the last 24 hours.  It must have been narley! 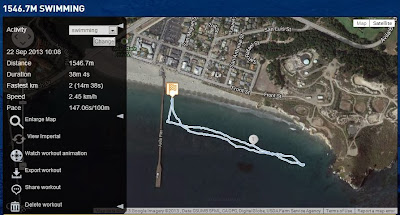 It was sunny, breezy and very uncrowded at Avila Beach today.  There seemed to be almost no one else on the beach on this beautiful September day.  The water was 57 degrees and choppy due to a steady westerly breeze.  There was a yacht race under way with numerous boats maneuvering near the end of the Avila Pier so our route would stay close to the beach today.  Swimming today were Sylvia, Gerry Gross, Niel, Brad, Fred, Rick, John H., John and Hank.  Rob was here but was going to fool around in the surf with his hand plane. Sylvia and Gerry swam their own route.  The rest of us swam the east side of the buoy line down to Fossil Point and back.  We covered 1547 meters/ .96 mile and spent 38 minutes in the water.  John H. and Fred continued on and added part of the buoy line of the west side of the pier.
There will be days, probably early next year, when we will wish the water was 57 degrees, but for now it is a matter of getting used to falling temperatures and cooler days.

I wonder if we will see any water temperatures in the 40's this winter? 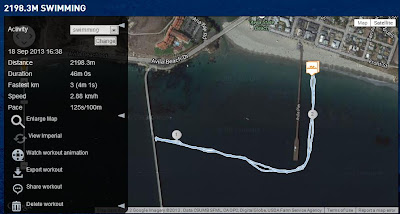 Tom Lorish and I swam this evening.  There was a light but steady offshore breeze that was putting just a ripple on the water.  The air was very warm and the water temperature was 56 degrees.  There were some seals around but no birds or signs of bait fish.  Tom and I swam out to the end of the Avila Pier, over to the usual spot on the Cal Poly Pier and came back on the same course.  We covered 1.37 miles in 46 minutes.  The swimming conditions were great with no chop, swell or current to deal with.  I thought that it was colder by a degree or two over towards the Poly Pier and Tom thought that it was colder near the Avila Pier, so, I can say that the water temperature was variable.  The difference of opinion might have had something to do with me starting the swim with my wetsuit unzipped or that Tom wears a Farmer John.  There were several seals that were checking us out when we stopped at the Poly Pier and two of them followed me all of the way back to the beach.  They had some friends that joined them near the Avila Pier.  It was kind'a freaky. 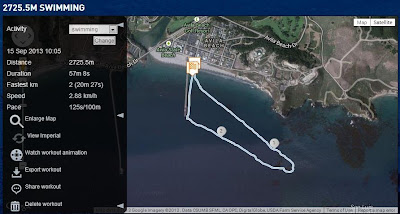 Today we had sunny skies, calm winds and 59 degree water.  Rob and Allison were able to join us today and \Allison brought her kayak so a supported swim was possible.   Sylvia, Susan, Ali and Amy swam along the buoy line and Niel, Duke, Rick, John, Fred, Tom and Katie swam to the rock off of Fossil Point.  The water temperature was nice and even. We had a bit of a swell rolling across our route on the way out and a strong surge when we swung around the rock, but otherwise the swimming conditions were great.  Tom and John were well off the front by the time we arrive at the rock.  They headed straight back to our starting point while we decided to angle to the end of the Avila Pier before coming in.  We covered 1.7 miles in 57 minutes. 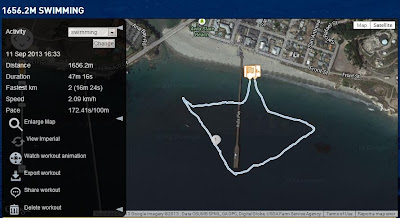 Things looked good for a nice swim this evening.  The water was 60 degrees (maybe), it was sunny with scattered clouds, there was a steady SW breeze pushing a wind chop and current. There were a lot of fishermen on the pier, all grouped up along the surf line, but the single cormorant that I saw swallow a fish seemed to be the only one catching anything.  There were no other birds or seals in sight.
Swimming tonight was Mark, Marie, Susan, Niel, Tom, Raven and Stephan.  Raven lives in Madera.  He had been in King City working on a photovoltaic installation and wanted to get in the ocean so he found us through the website.  He said that he wasn't too concerned about the water temperature because his thermostat seemed to be set extra high.  I loaned him a cap to go with the goggles and the shorts he was wearing.  Marie and Susan were going to swim the buoy line.  The rest of us set off to do an easy triangle.  I went through three temperature zones just getting out to the buoy line.  When we formed up at the end of the buoy line we waited for Raven, who was steady and comfortable swimmer but slower than the group.  He was all smiles and enjoying himself and joined us on the swim towards the end of the pier.  Tom and I both stopped to check on him because he stopped several times and seemed to either be having some trouble with his goggles or found swimming into the chop to be uncomfortable.  It turned out that he was having a great time and kept stopping just to enjoy the beautiful views around the bay.  I guess that the rest of us could learn something here.  Mark headed in along the pier while the rest of us headed towards the creek.  The water was very warm and funny tasting near the creek, so we swam back towards Raven (the bump in the plot) and then swung back along the buoy line, under the pier to the first buoy and in.  Mark had picked up Susan and Marie and helped Susan get to shore.  The cold water had caused her asthma to flare up and she was having some difficulty breathing.  They all got out OK but Susan will be doing her open water swimming at Lopez until Avila warms up.
We were in the water for 47 minutes and covered just over a mile.

Today's swim plot is brought to you by Operator Error
and a completely dead battery at the start of the swim.  :-/

We had a nice group today made up of Niel, Sylvia, Duke, Tom, Amy and her brother Bo, John H., Brad, Casey, Gerry, Fred who came up from Santa Maria for his first swim with us and Ali and Robin who were first timers.  The water was 61 degrees with a steady but small chop out of the SW.  There was thick, low overcast, almost fog everywhere. There was also a lot of hopeful looking fishermen but I did not hear a seal or see a pelican or cormorant or any other sign of fish or bait being around when I was on the pier taking the water temperature.
The general idea for the swim was to do the regular triangle clockwise but as usual there were several variations.   When we formed up at the last buoy Amy and John H. decided to stick to the buoy line.  They continued on down to Fossil Point, returned all of the way to the last buoy at the creek and came back to the pier.  Sylvia stayed with Ali and Robin who on their first time out swam the east half of the buoy line.  The rest of the group swam to the end of the pier where Brad headed in and we poised for Leslie who was taking pictures of us from the end of the pier. 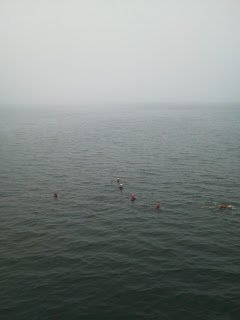 The rest of us swam to the creek buoy and back to the pier where we found Rob.  He and Byron were accompanying a group of Rob's swimming friends from LA who were attempting to swim around every pier in SLO County today.  They had begun in San Simeon at 7 AM and were working their way south. 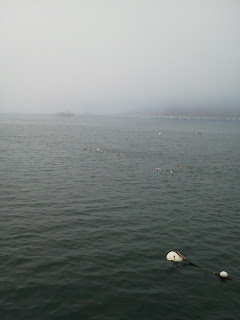 Leslie Lorish grabbed this shot of the LA group circling the Avila Pier.


We will still be swimming Wednesday evenings at 5:30 until some point after the time changes and we loose too much light. 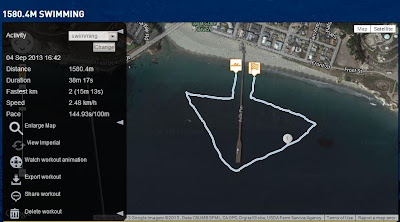 Mark, Marie, Susan and Niel scored great swimming conditions this evening; warm weather, clear skies, a very small wind chop and 67 degree water!  There were several flocks (?) of pelicans around but they were not finding anything to dive on.  One seal and one otter made up the rest of the wildlife.  Niel and Mark swam a counterclockwise triangle while Marie and Susan swam the buoy line.  The top foot or so of the water was really warm, there were not even any cold spots.  Mark and I were in the water for 38 minutes and covered 1580 meters.
I'll be back for more of this Sunday!