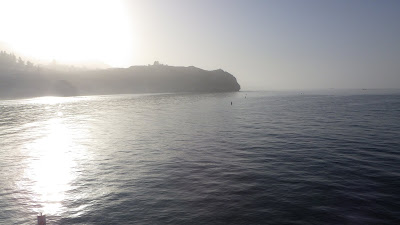 Looking east from the Avila Pier along the buoy line.

We had a nice morning at Avila Beach today. At 7:30 it was sunny and still, 46° and what light fog there had been was almost burned off.  The water temperature was 53° and the water was clear and glassy. 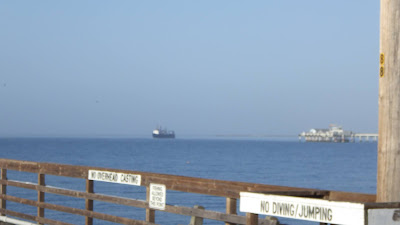 This ship has been mooring in the bay the last few days. I think it was here last year for work connected with laying undersea cables.
Swimming this morning were Duke, Pat, Niel and Jodi. Pat lives in Santa Maria and had connected with Duke about doing some open water swimming. This was to be his first ocean swim on this side of the Pacific. He previous experience had been swimming in the ocean around Okinawa.  We started out by going down the swim zone buoys to the east and back and then under the pier to the west end of the buoys at the creek mouth. There was no stinky water there today. We swam to the end of the Avila Pier and regrouped. Duke and Pat went in while Jodi and Niel went over to the third crossbars on the C.P. Pier, swam along the pier to the second crossbars and then back to the first buoy and in.
The air temperature was not as warm as yesterday and the wind was not coming up as early but the conditions made for a very nice swim.
We saw Tom Lorish as he was getting in. 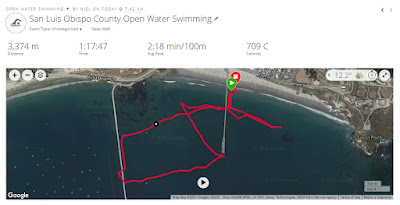 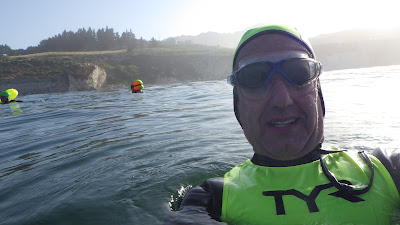 Pat, Jodi and Niel at the forth buoy on the east side. 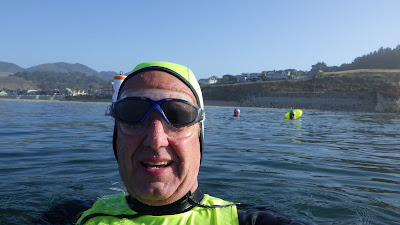 This morning I had decided to go to the SLO Farmers Market at 8 and to swim at 10.  That turned out to be a good and not so good thing. At 10 AM Avila Beach was sunny, clear and warming up nicely. It was about 60° on its way into the 80°'s. Ther water was 53.5° and flat but there was a lumpy surface swell from the NW that was starting to wrap around the Port San Luis breakwater and work into where we swim. That was the good part. Not so nice was that Avila was already crowded and only about 10% of those present were wearing masks.  I found myself continually trying to decide whether to keep wearing my mask or not, always wondering what was safe. Yuch, extra stress. 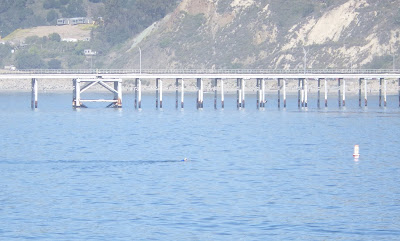 Tom Lorish got in at 9 and I got this photo of him at 9:40 when he was swimming towards the last buoy near the creek mouth. I didn't' cross paths with him in the water. 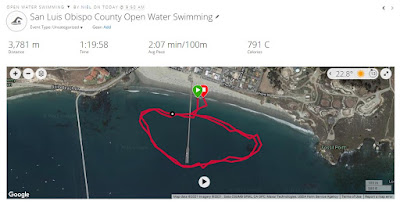 I swam out, hung a right at the first buoy and swam two big triangles without stopping. The water was much colder under the pier by 2 or 3 degrees. The chop wasn't too noticeable on the leg from the creek mouth to the end of the Avila Pier. On the next leg from the end of the pier to the last buoy on the east (right in this image) side of the pier the chop built until it was troublesome where I turned towards the last buoy and came back towards the pier along the buoy line. The chop would lay down the closer I got to the pier. 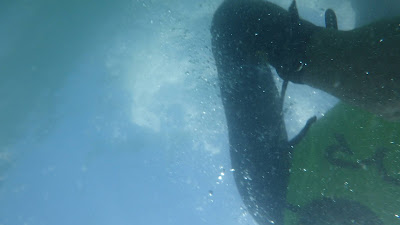 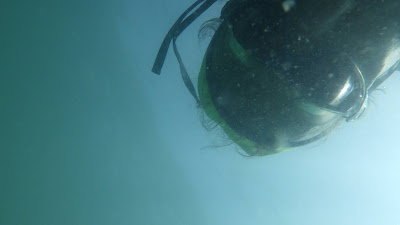 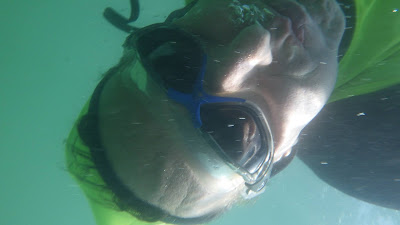 Attempted underwater selfies.
It was really warm when I got out. It felt like the mid 80's, almost too hot to sit out in the sun. It sure felt nice while getting showered off and changed.
I'll swim tomorrow morning at 7:30 with Duke, Jodi and whoever else shows up.
Right now I'm thinking that I be going back to getting in no later than 8, especially on weekends.
niel
Posted by Niel at 3:25 PM No comments: 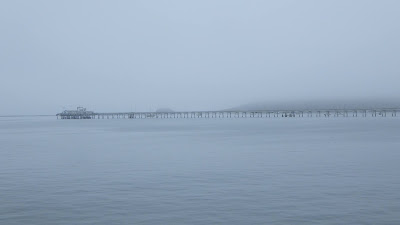 It was very gray at Avila this morning with low clouds that went down to the horizon. No real fog and almost spitting, but the ocean was calm with a flat and glassy surface. The surf was 2 to 3 foot. It was 52° with 54.5° water.  I got there to swim at 9AM, Sara and Leslie were already there. We got in, went to the first buoy and turned left. This was to be Leslie's first swim since fracturing her right elbow about two months ago. She was going to try and swim a few buoys. Sara and I would swim a triangle and I would go an extra lap on my own. 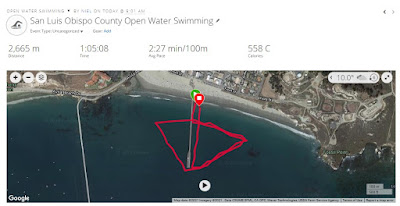 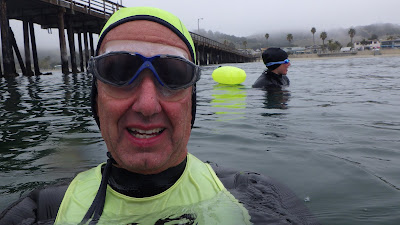 Niel and Sara at the first buoy 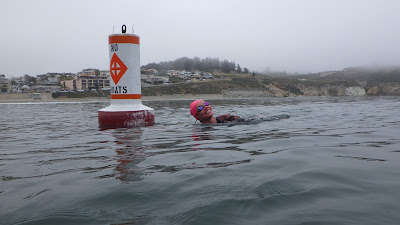 Leslie is all smiles after having made it to the forth buoy before turning back.
Sara and I cut our swim to the last buoy near the creek mouth short when we ran into some really stinky water near the creek mouth. We angled back over to the pier where Sara went in and I decided to do another lap on the left side. 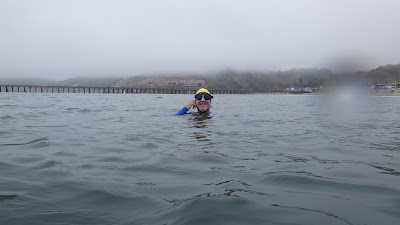 I ran into Tom Lorish at the last buoy. He was heading back in along the buoy line and I headed for the end of the Avila Pier.
When the amount of water flowing in San Luis Obispo Creek is low, like it is now, the water in the creek's estuary becomes stagnant. The bird and fish poop in the water does it's thing and when this water breaks out into the ocean it can taste and smell like sewage. Definitely something that will put a crimp in your morning and to be avoided.
I'm going the the Madonna Farmer's Market this Saturday at 8 so I'll swim at 10 and see what the midmorning crowds are like.
niel
Posted by Niel at 7:26 PM No comments:

The weather in Avila at 8 o'clock was clear and sunny with a swell out of the SE and occasional 3 to 4 foot surf. The air was 50° and the water 53°. I was wading in at 8 when Duke was coming down the stairs. We never connecting the the water but I did speak to Tom Lorish on my second lap down the eastern line of swim zone buoys. I swam out to the first buoy, turned right and swam two triangles made up of the buoy line and the end of the Avila Pier. I thought it would be closer to 3K but I got a bonus. 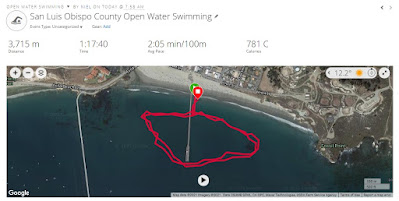 Sunday morning at 7:30 Duke, Niel, Jodi and Sara waded in to swim. The air temperature was 50° and the water was 53° . It was sunny, no clouds with the wind already picking up. Duke wanted to be out by 8:30 and Jodi and I were not looking for a repeat of yesterday so we planned about 2000M. 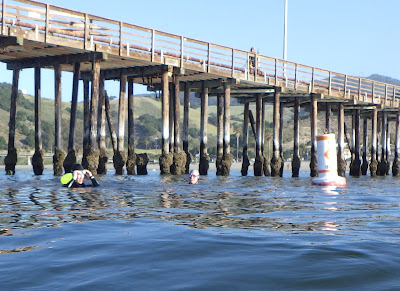 Sara and Duke at the first Swim Zone Buoy.

Jodi at the same spot 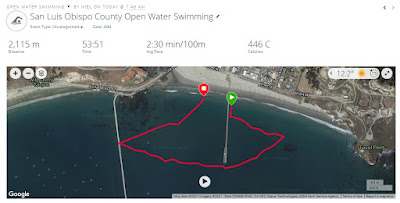 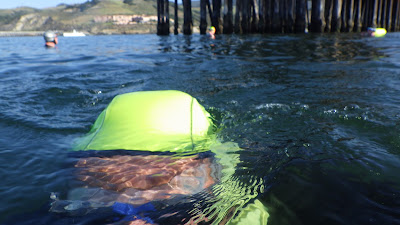 At the end of the Avila Pier.
Duke, Jodi, Sara and my head.
I'll swim Tuesday at 8AM.
niel
Posted by Niel at 11:47 AM No comments: 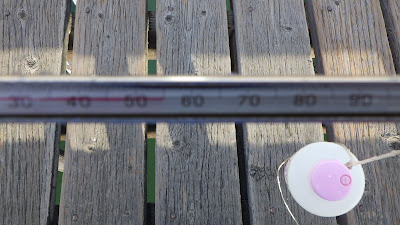 Having begun swimming at Avila this year Jodi had never been in 55° water so she thought a long swim would be a good idea. Thinking that I'd like to do about 4K I suggested that we go down the swim buoys to the east end and back along the whole line to the mouth of the creek, over to the second crossbars on the CP Pier and out to the end of the pier.  From there we would decide how to complete our swim. I was thinking some kind of route back to the Avila Pier and in.

It had been smooth swimming until it started to get bumpy as we came out along the length of the CP Pier. At the end of the pier there was a good chop and push out of the SW.

At the end of the CP Pier Jodi suggested that we swim to Fossil Point. That would be a leg of 14 or 1500M but we would have a push from the swell so I said fine. 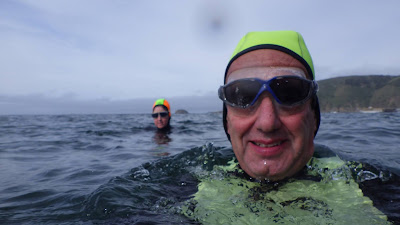 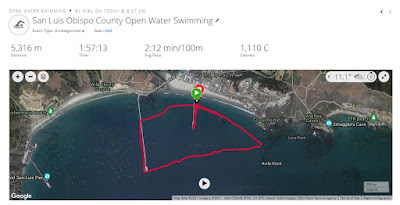 Two hours in the water and 5,316M. Neither of us were cold.
What a difference those few degrees made.