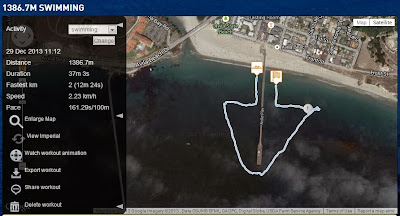 For the last swim of 2013 Avila put on a great show.  It was clear, sunny, and very warm on the beach with no wind and 53 degree water.  There was a swell out of the SE that produced an occasional 3+ foot set of waves and put some real roll on the water's surface.  Rob, Niel, Tom Lorish, Amy and John Hampsey were joined by Loren and Kelly, a couple of Rob's friends from out of town.  Loren and Kelly were reacquiring their open water swimming chops so we started out with a loose plan to swim a shortened triangle that would give them a chance to ease into things.  Rob stayed with Kelly who was going without a wetsuit and was having trouble getting in.  John accompanied Loren who decided to head back to the beach rather than swim too far out from shore.  If you have not been in cold water in a while caution is always the best course. Tom, Niel and Amy worked around the end of the pier and back towards the 'buoy' line.  John had dropped off Loren and swam east parallel to the beach to reconnect with us.  We swam back to the pier and came in.

We are going to swim (in the water) at 9 AM on New Year's Day.  We will walk out to the end of the Avila Pier and swim back to shore.  Wear whatever you are comfortable in.  The water will be about 53 degrees.  If you want to start from the beach and swim out and back that is fine too. POTLUCK afterwards.
The 9 AM start time will give us a chance to get in and out of town before the people attending the Avila Beach Polar Bear Plunge arrive, or, you will have a prime parking spot if you want to stay and do the plunge at noon.

Niel, Rob, Amy and John Hampsey swam today.  The water was 53 degrees. It was calm with on a small swell and an occasional set of 2 to 3 foot waves.  There seemed to be a lot of gulls around but not much other wildlife.  We swam out and left, down to the end of the sea wall which is about where the buoy line ends.  We turned and swam to the end of the Avila Pier and came in along the pier to our starting point.  We covered a little over .6 of a mile.
My gps didn't start when we did so there is no route map today.

Rob and I ran into Alan Raul and Cary Geihs out on the pier.  They have organized a Avila Beach New Year's Day Polar Bear Swim.  Check out the flyer.
We'll talk next Sunday about what we want to do for a New Year's Day swim. 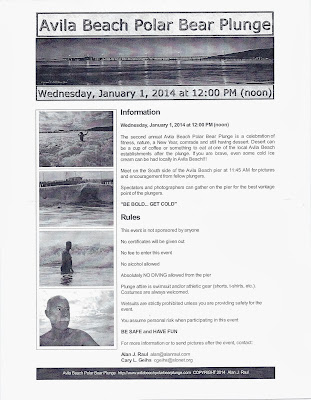 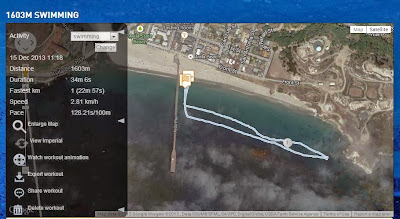 Niel, Brad, Jon and Ron swam today.  Allison paddled for us.  Rob decided to soak up some sun on the beach.  Ron is from Bend, Oregon, in town for a few days and found us through someone he spoke to at Kennedy.  He has done some tri's, including the beyond Ironman distance one in Bend.  They do their open water swimming in lakes so this was a treat for him. The water was 53 degrees, it was mostly sunny with no wind and small waves.  Except for the water temperature the swimming conditions were great.  Ron turned out to be a strong swimmer, keeping up with Jon and Brad.  Jon and Brad were tired/recovering and this was going to be new for Ron so we stayed close to the shore incase anyone decided to bail out. This swim was 1603 meters and I was in the water for 34 minutes.  After we got out there were several pods of dolphins close to shore.  The water did not feel much warmer to me than yesterday's mile in 50 minus temperatures but I was not nearly as cold after I got out. 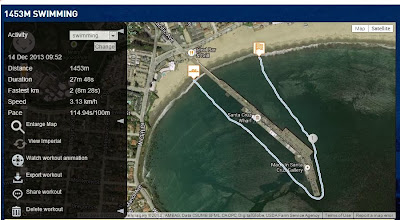 The 4th Annual Santa Cruz Will Swim For Food Fundraiser

Rob Dumouchel, Ali Beug, Leslie Tappin Lorish and I had a wonderful experience Saturday at the Will Swim For Food Fundraiser in Santa Cruz. There were more than 70 swimmers that raised a total of $70,640.00 (so far, donations are still being accepted!) for food banks from San Diego to Oregon as well as Virginia and Louisiana.
It was sunny with an air temperature of about 40 degrees at the start.  The water temperature was cold for this time of the year at 48 to 50 degrees.
I had a great swim and thanks to our donors the Avila Dolphins raised $2120.00 for the SLO Food Bank!
Deserving special comment are Rob, who swim without a wetsuit, Leslie, who swam in spite of a bad cold and Ali for whom this was the longest, roughest and coldest ocean swim that she had yet done.
About 15% of the swimmers went without wetsutis. 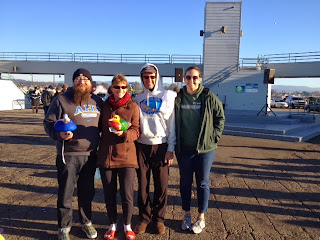 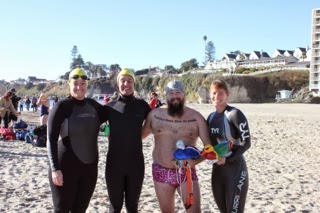 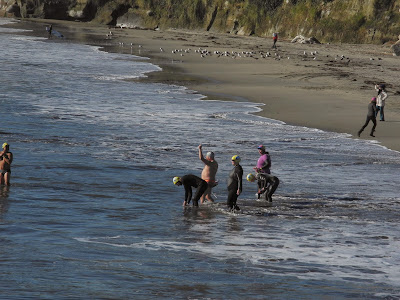 That's me , Rob, Ali, Leslie and someone in pink wading in.  It actually didn't feel super cold at this point but towards the end of the pier I could tell that the freezing feeling was not going to even out. 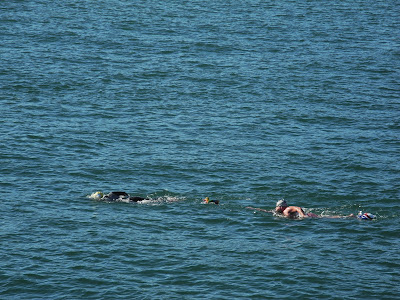 Leslie and Rob towing their ducks.  For a $150 donation you get a wood duck decoy that you can decorate and tow around the pier. 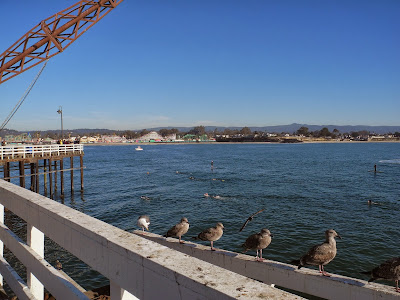 Down the other side of the pier and heading towards the finish. 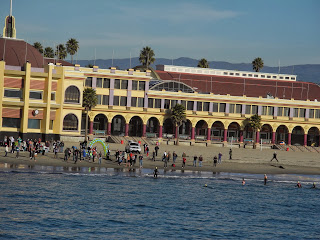 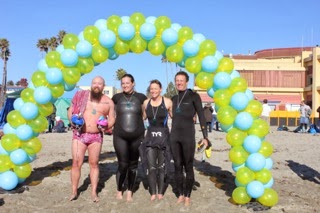 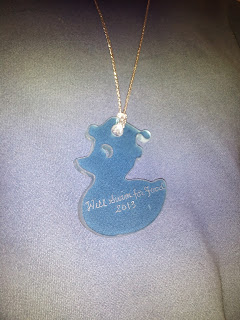 The cool finishers medals are made out of blue glass. 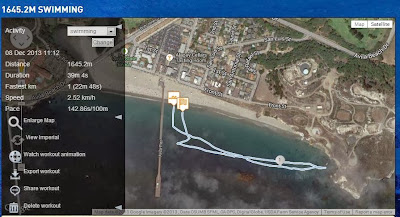 Niel. Ali and Rob swam today.  It was 50 degrees and sunny when we got in with a mild offshore breeze, 1 to 2' surf, 53 degree water and flat swimming conditions. There were even some dolphins about halfway down the beach creating massive swim envy.   We decided to swim down to the point and back, covering about a mile in a tune up before next Saturday's 1 mile Will Swim For Food trip around the Santa Cruz Pier.  This Sunday's 50 degree air and 53 degree water was sure different than last weeks 80 degree air and 56 degree water.  I was most of the way to the point before I began to feel evened out with the water temperature. The return swim was into a small chop that had come up along with a line of high clouds that blocked out our sun.  When I got back to the pier I swam back to pick up Ali and we headed in to the beach together.  With no sun it was too cool to linger on the beach so once we showered and dried off everyone headed off.

At the Palm Springs Tri this weekend were  Rick and Rhonda Mareina (1/2 on Saturday) and Duke Parmley (Olympic on Sunday).  Rick had a time of 6:08:53.  I didn't find a time for Rhondia and results for the Olympic were not available as of this post.  If the weather conditions were anywhere near the cold and windy weekend that NOAA predicted they were going to have a Beyond Category experience.  Hope all went well.  Can't wait to hear all about it next Sunday. 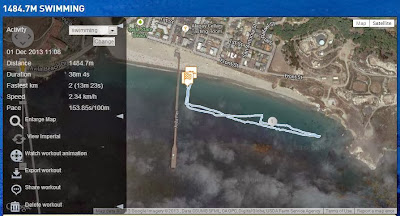 What a day at Avila!  For me it began when I pulled into town and found Front Street from San Francisco St. to San Luis Street filled curb to curb with Harleys. Must'a been hundreds of bikes. Avila was the conclusion of a toys for tots run that attracts riders from as far away as San Diego and the central valley.  It was quite a site.
The weather was just spectacular.  It was warm and windless, almost too warm on the beach, with no clouds, 1' surf and no swells. The water was 56 degrees.  Niel, Rob, Duke, Amy and Rick swam out and down to Fossil Point and back.  The swim out involved some regrouping, on the way back we swam without stopping. I covered .92 of a mile in a casual 38 minutes.  The water was clear enough that I could easily see the bottom when we were near the point.