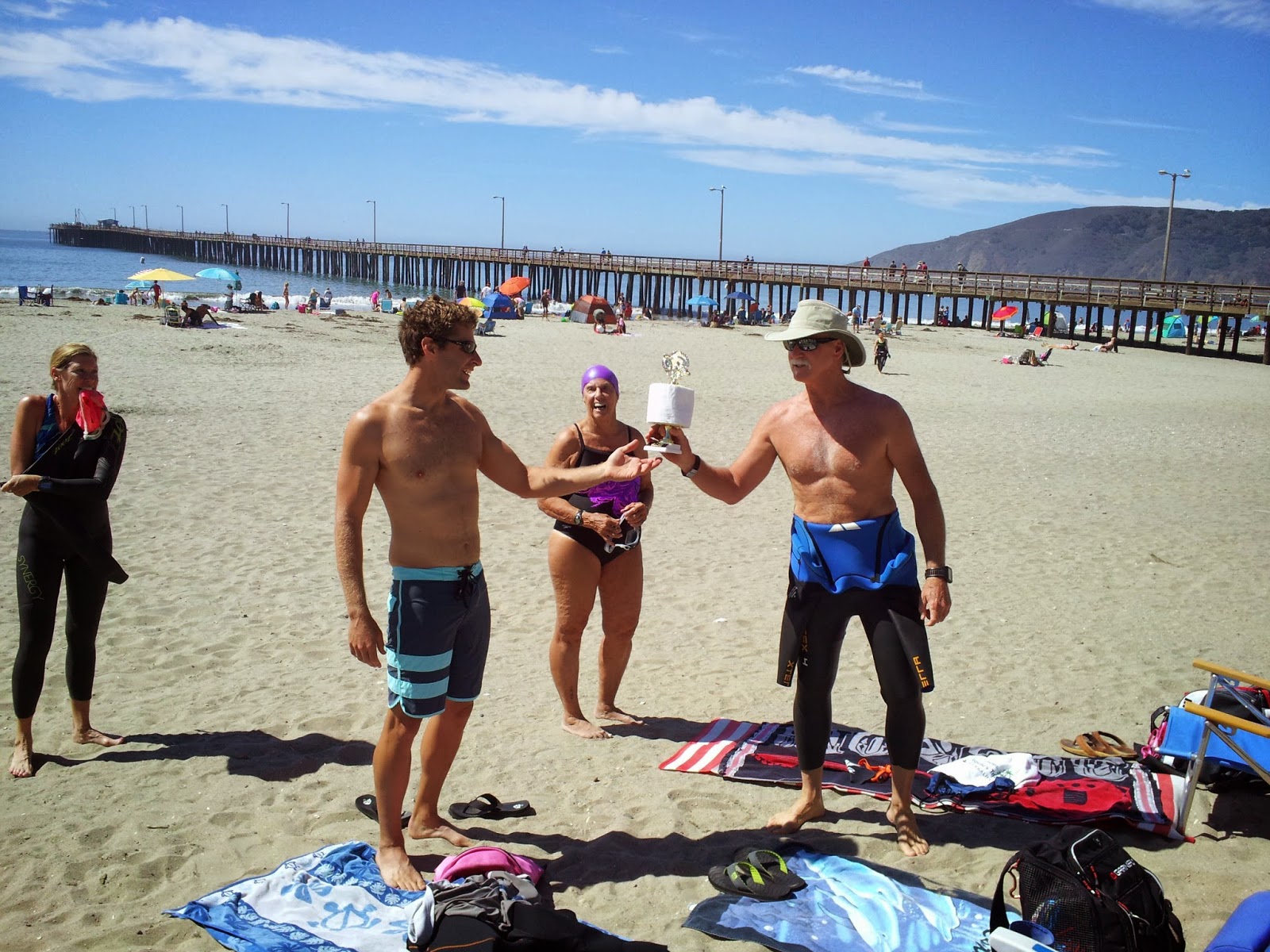 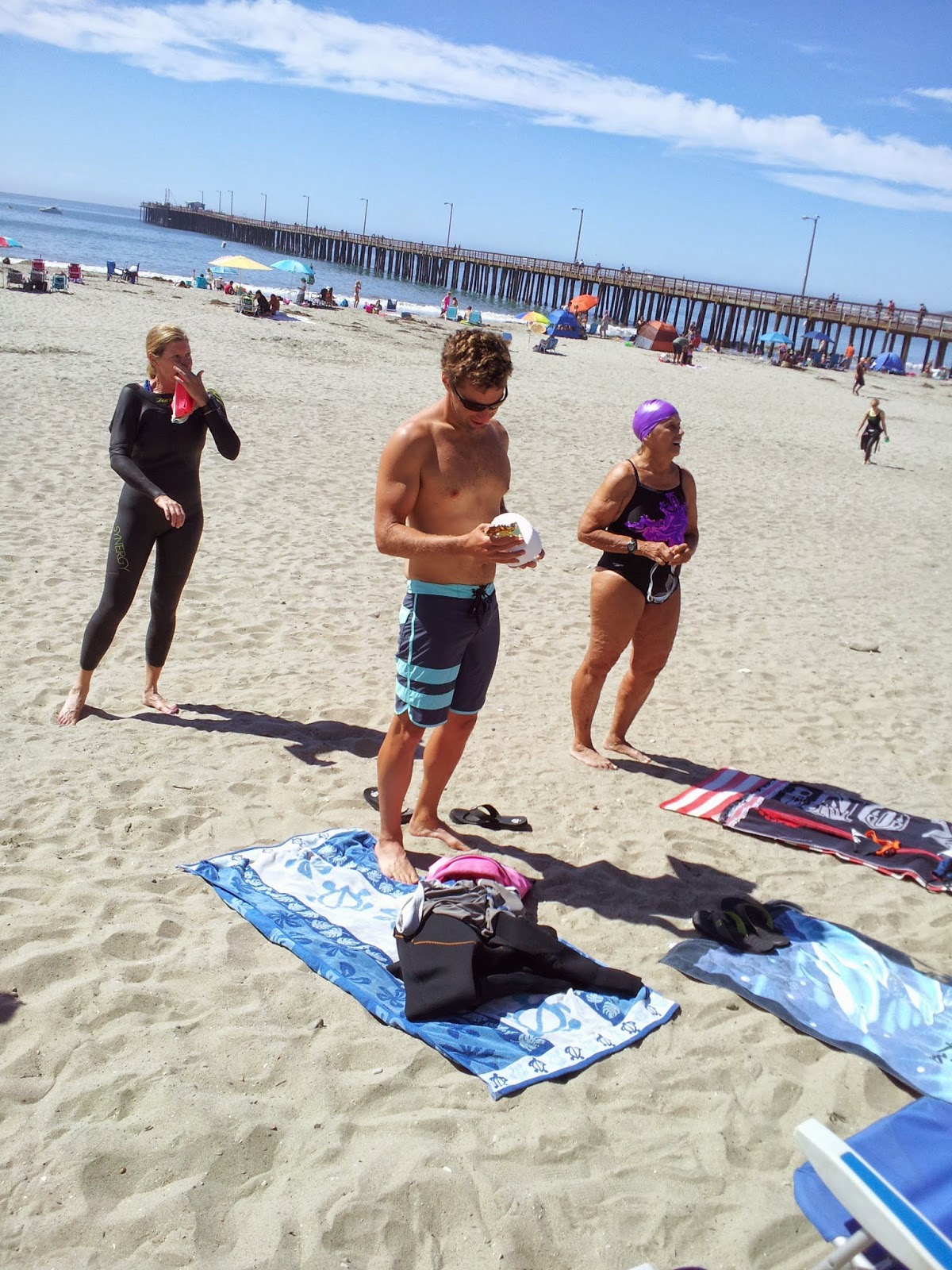 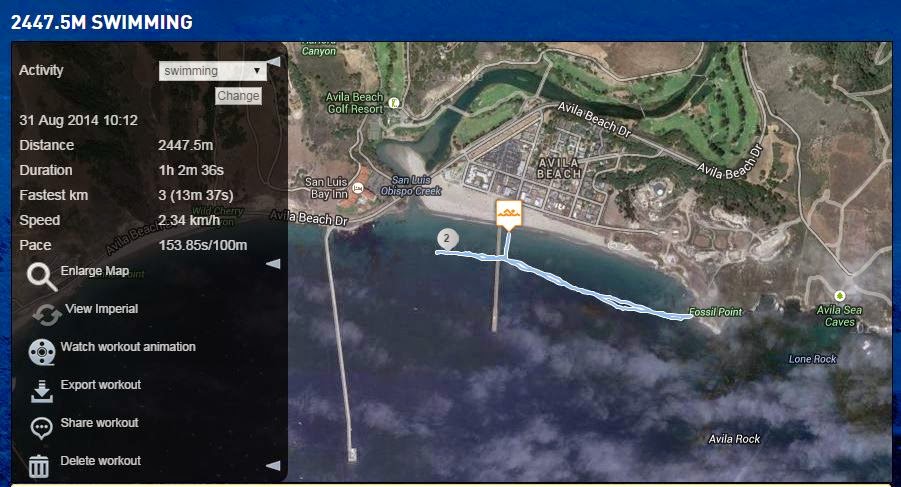 Niel, Mark, Kim and Lauren swam this evening. It was clear and warm at the beach. There were some large (for Avila) sets, maybe 4+ feet sometimes and the water was a fabulous 65 degrees!  There were some pelicans and other birds diving for fish but no bait balls. This was Lauren's first try at swimming in the ocean so we kept it simple. We took our time getting out through the surf and swam to the first buoy. At the third buoy Lauren and Kim headed in. Mark and I swam to the last buoy and back, so we did a 1/2 mile. The water was very comfortable. 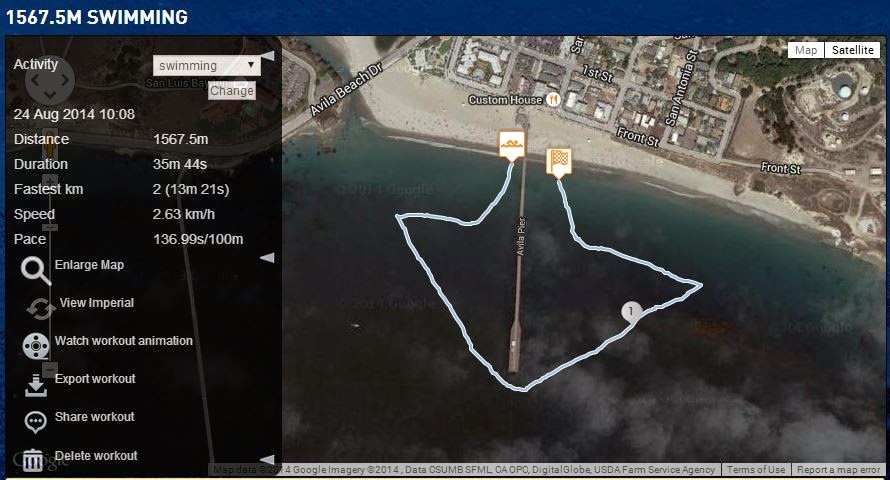 Very clear 62 degree water. Dave Van Mouwerik, Niel and Tom Lorish swam a CC triangle. Jon Hampsey and Amy swam the buoy line and Sylvia did her own swim as usual. Rick and Rhonda arrived a bit late and didn't swim but stayed to visit. 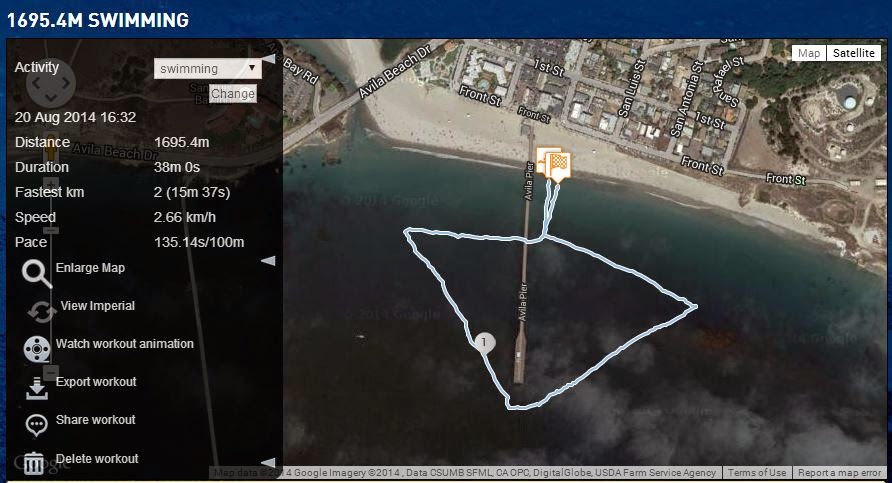 We enjoyed another beautiful evening swim in Avila. It was a bit windier than usual but it was sunny and warm with 62 degree water.  The ocean was pretty empty; no fishermen, no birds to speak of and just a couple of seals. Niel, Rob, and Marian swam while Stephen and Kelly waited on the beach.  Kelly was Rob's ride to the beach 'cause he was still waiting for the repairs to his truck to be completed so he can return to Arcata before school starts on Monday.  It's quite a story but the result is that Rob has slipped in three swims with us rather than the one that he initially thought was possible.
We swam the triangle clockwise because Rob wanted to and going clockwise at this time of the day would not have us swimming directly into the setting sun.  There was more wind than is usual for this late in the day so we had some chop to deal with, but the water was so nice. We has a great swim and covered just over a mile. 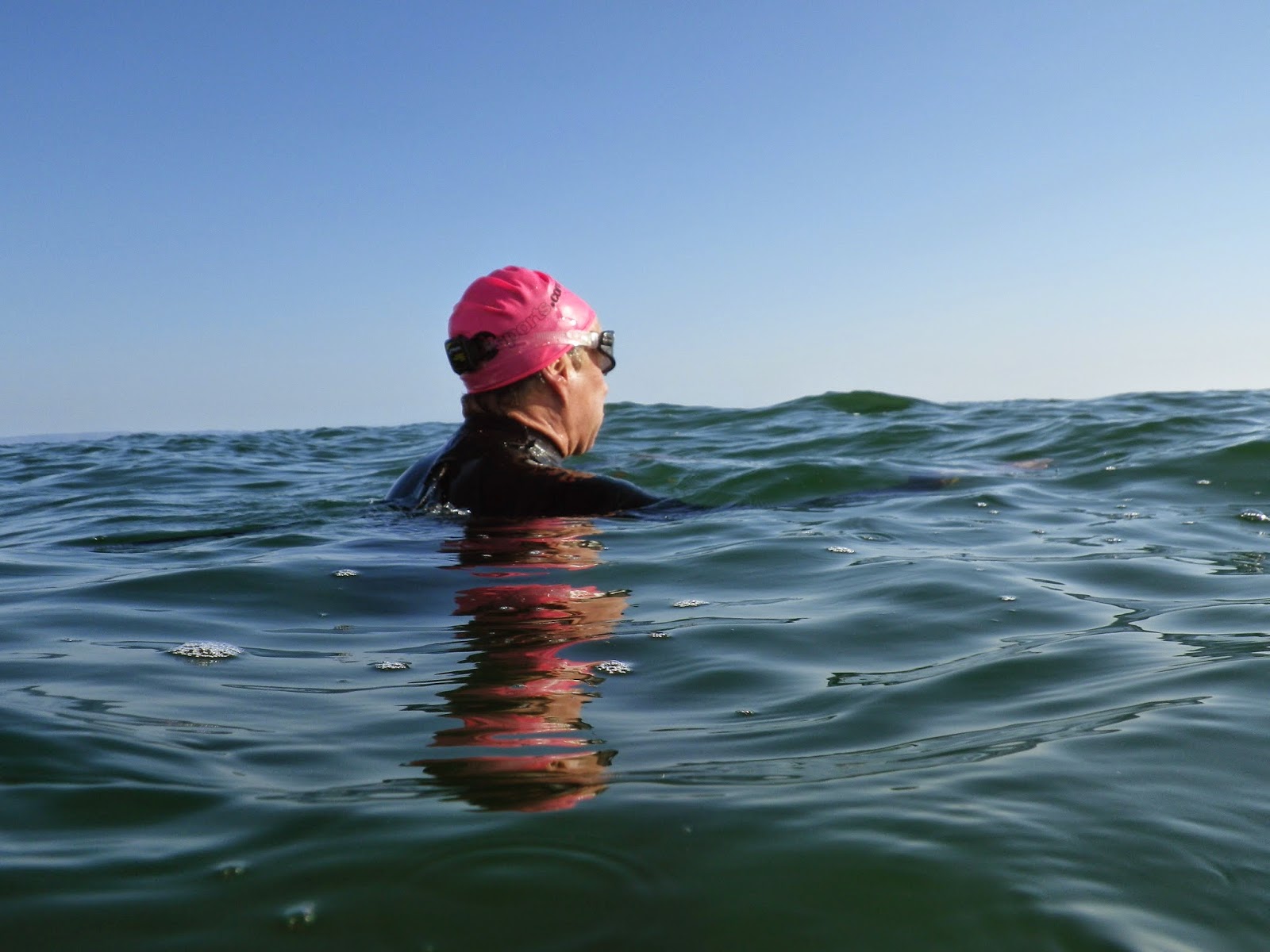 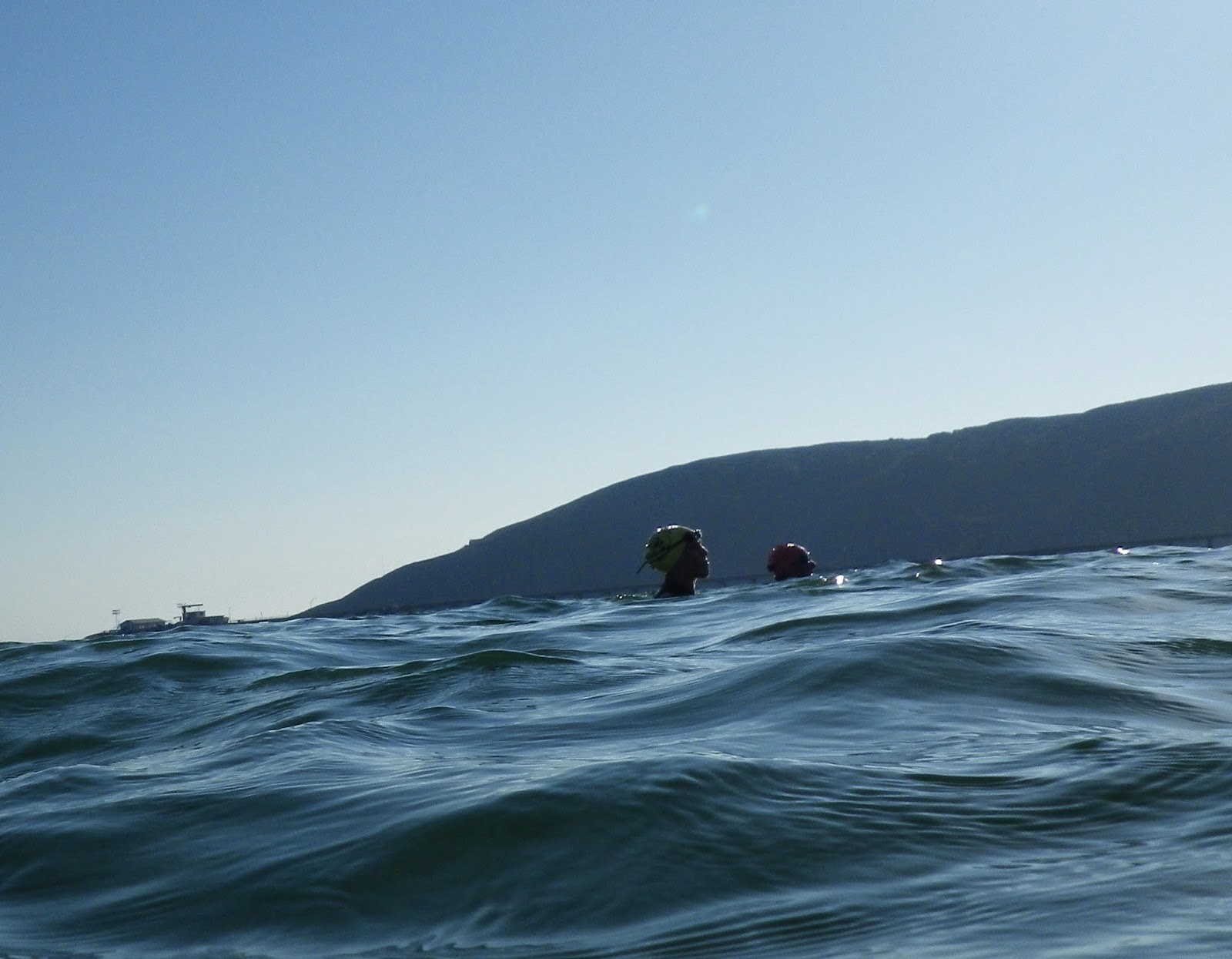 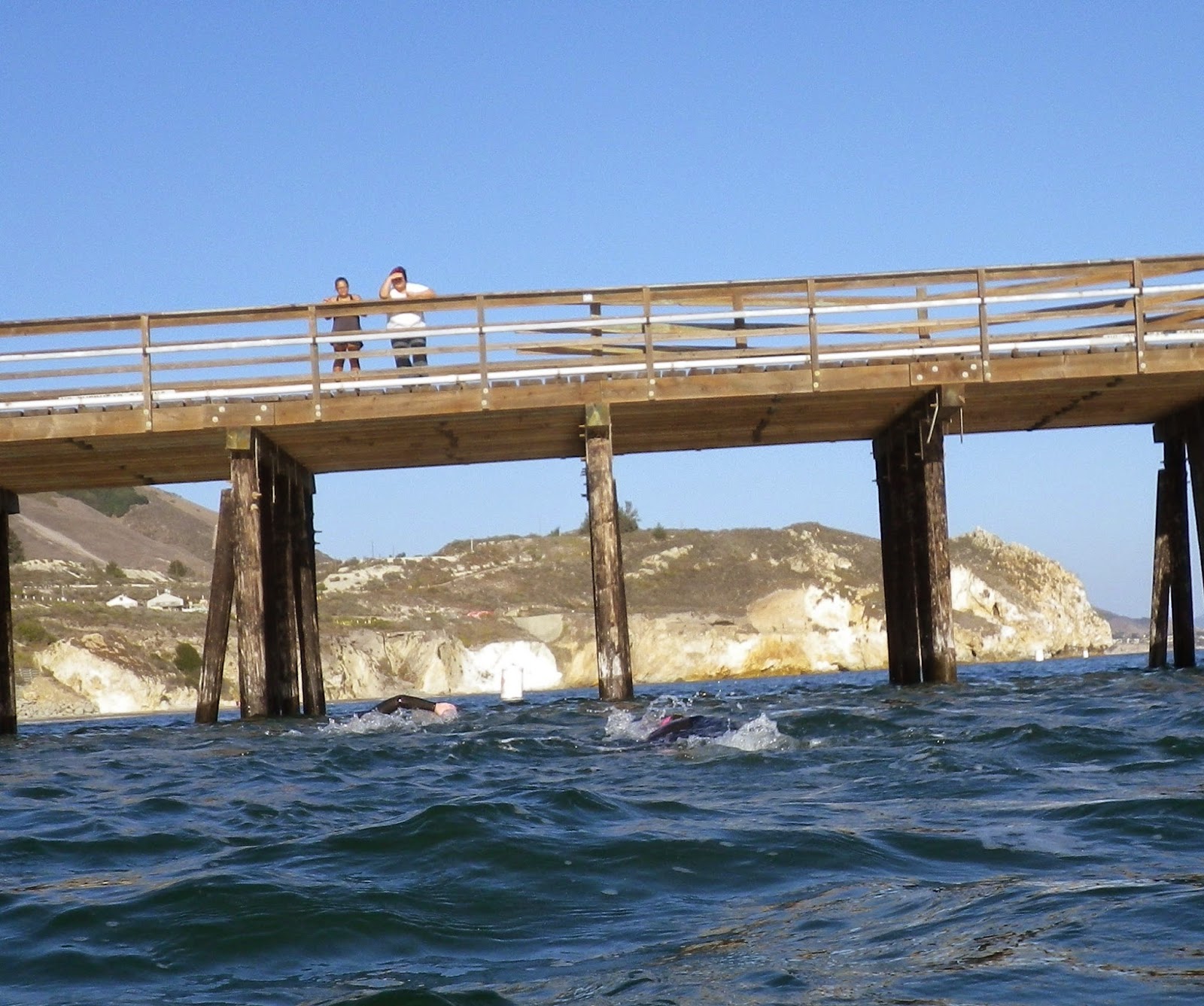 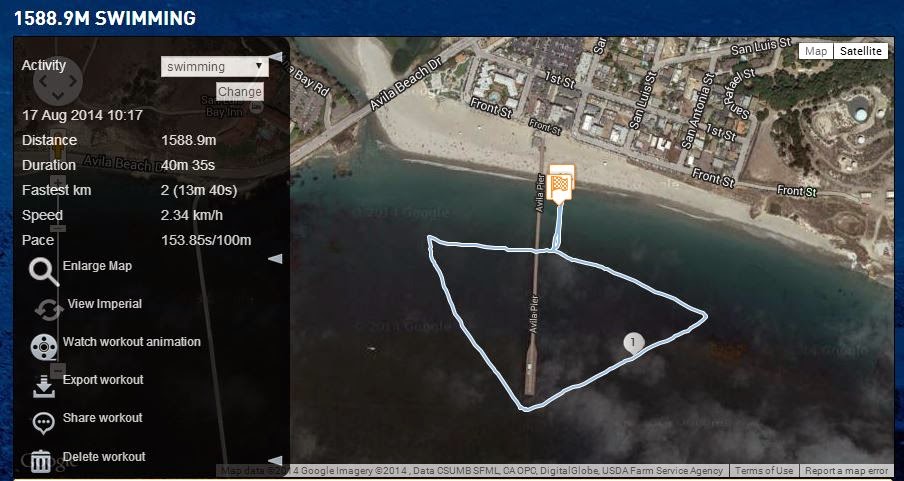 It was just about as good as it ever gets at Avila today; no fog, no wind, sunny and warm, almost no one fishing from the pier, no birds or bait balls and 61.5 degree water.  Except for one guy in a pleasure boat it would have been perfect. Swimming today were Rob, Rick, Niel, Duke, Angela (this makes 3 times!), Jon and Gerry Gross.  Rob had a more adventurous drive up from the wedding that he attended in Manhattan Beach Saturday night but he persevered and made it to Avila to swim with us before continuing to Arcata.  Rob wanted to do something traditional so Duke, Rick Jon, and Niel joined him to swim the triangle counter clockwise. It was really nice in the water so we spent plenty of time at the turns.  We covered just short of a mile in a casual 40 minutes of swimming and visiting while enjoying the water. On the leg from the end of the pier to the end of the buoy line we had a power boat come barreling around Fossil Point and head in towards the beach as if he was going to shoot the pier but he spotted us, throttled back and headed back out to sea.
Once back on the beach Duke went back out to swim with Angela along the left side of the buoy line and Gerry came by, got in, and swam the buoy line on his own for 45 minutes.
After our showers there was plenty of benchracing conducted on the beach before next weekends Santa Barbara tri and aqua bike. We'll see how the talk holds up two weeks from today. 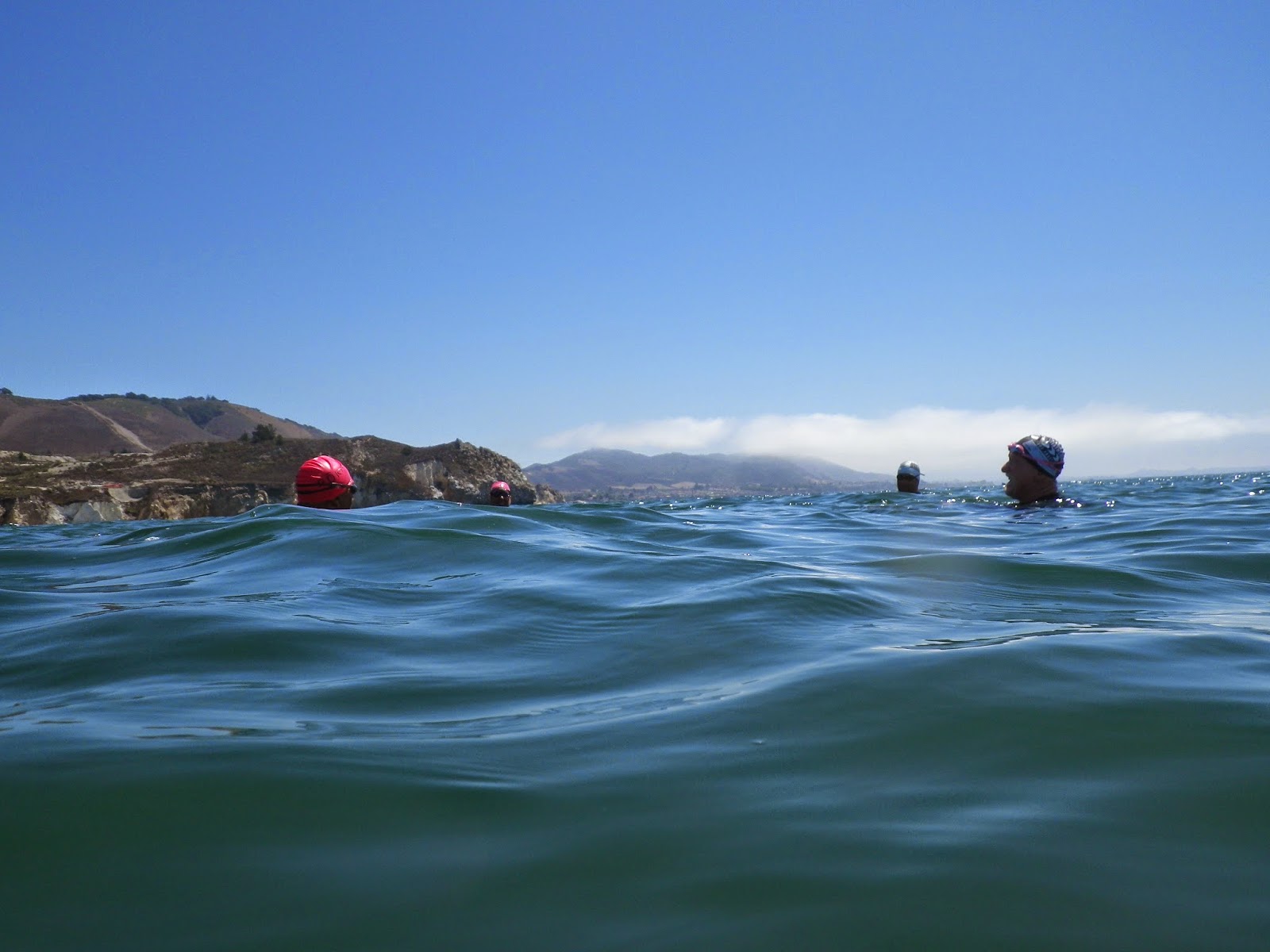 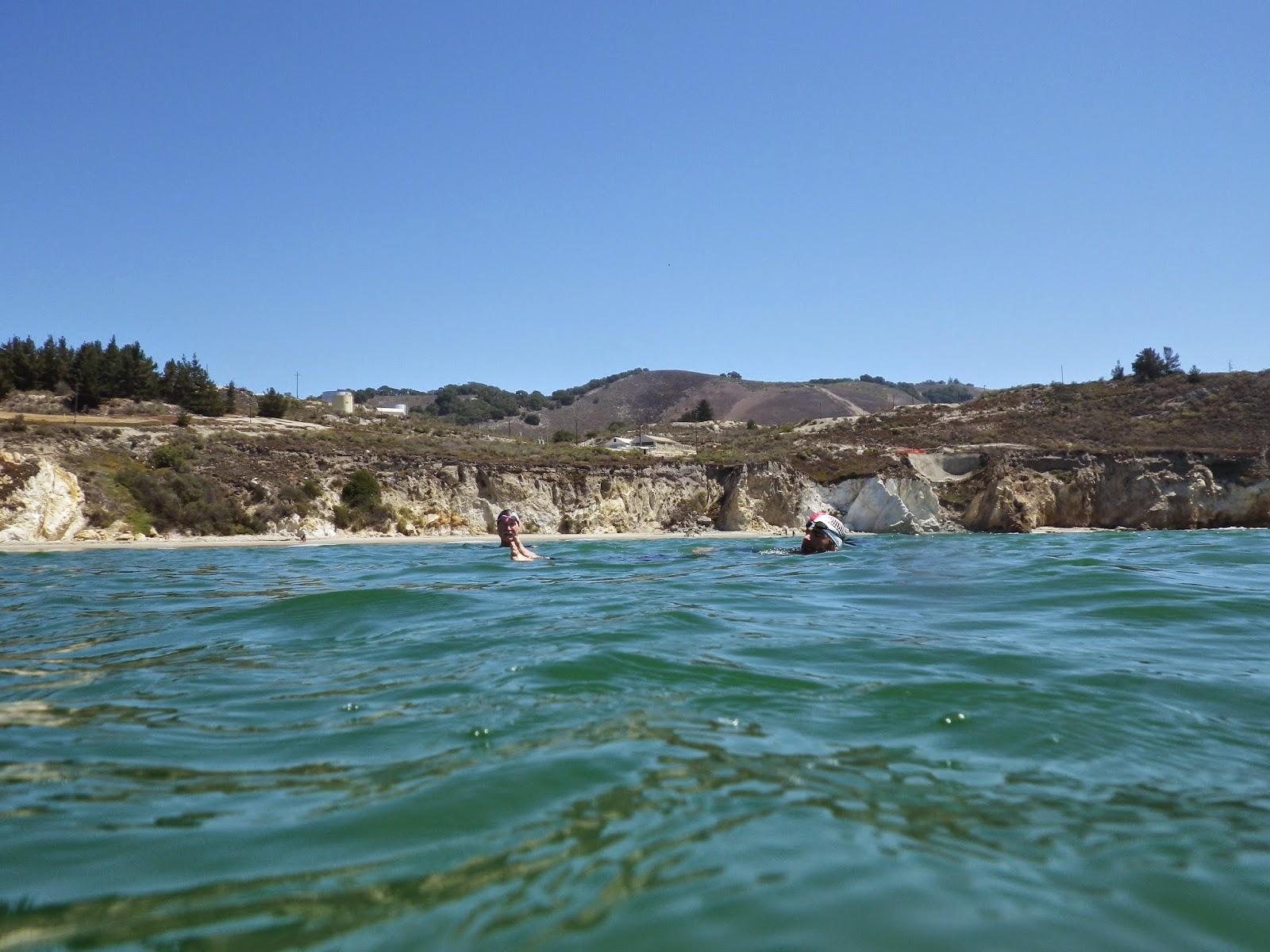 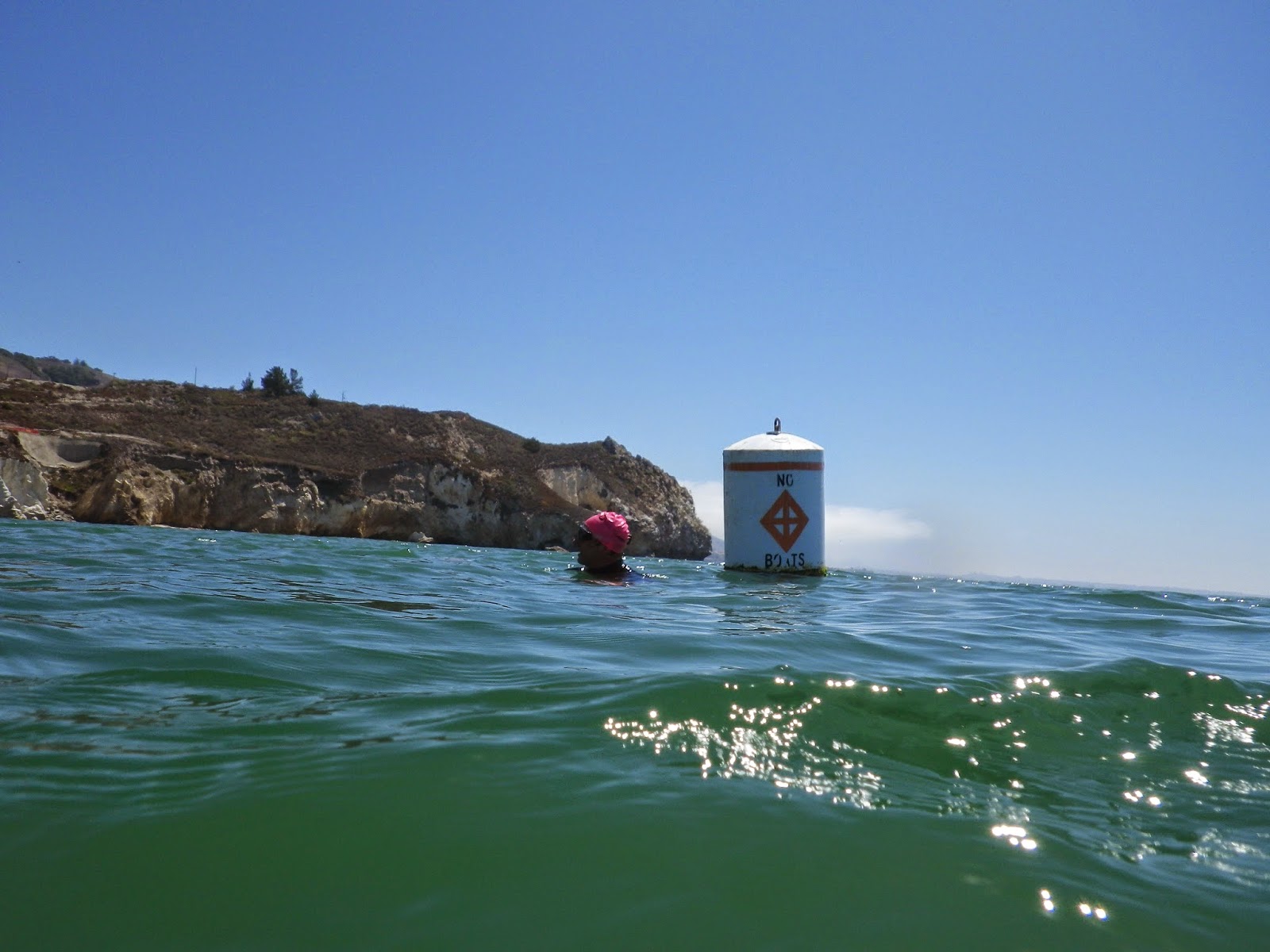 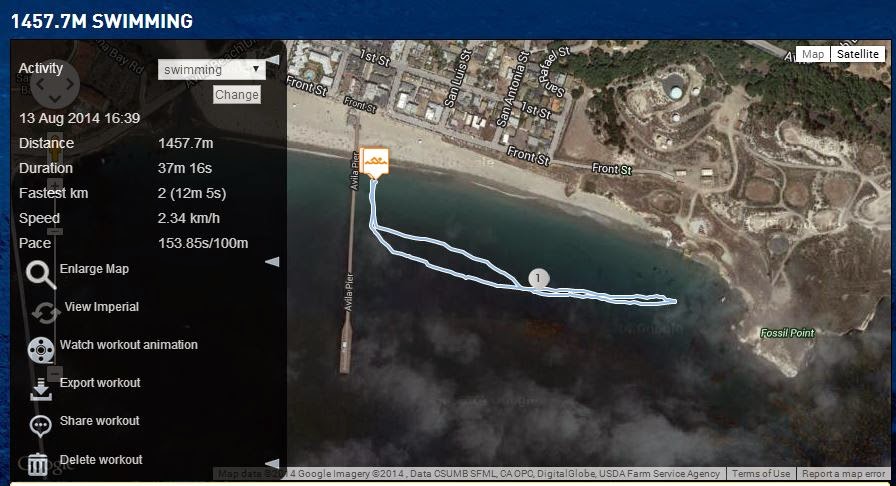 Swimming tonight were Niel, Mark, Lynn, John Siegel and Rob. It was nice to see some faces that we have not seen in a while.  John and Lynn have just been absent but Rob now lives in Arcata so this was a treat.  The water was 63 degrees (about 10 degrees warmer than Humboldt Bay where Rob is swimming now), some current and chop but not bad.  We swam down to Fossil Point and back for a very pleasant short mile. 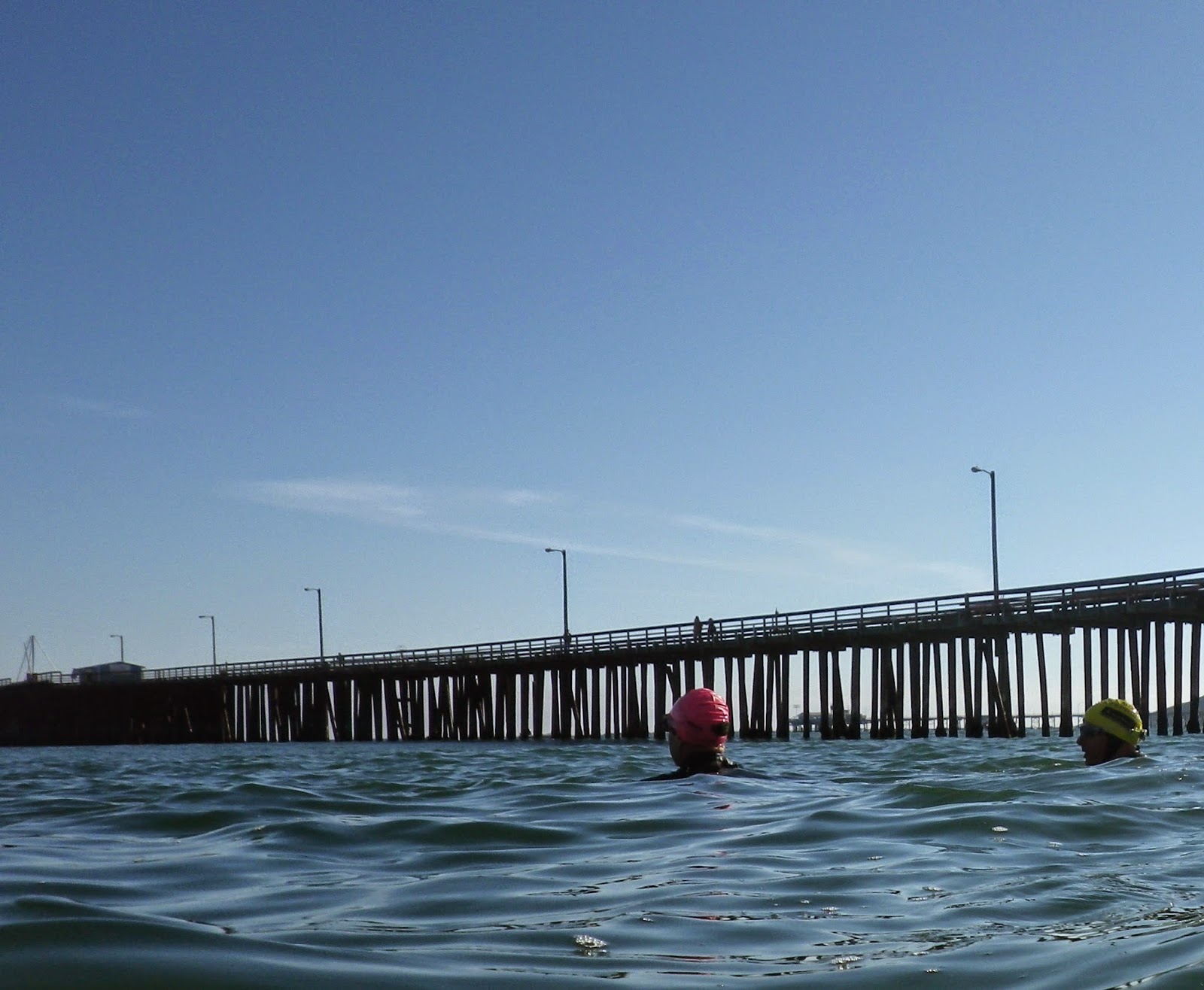 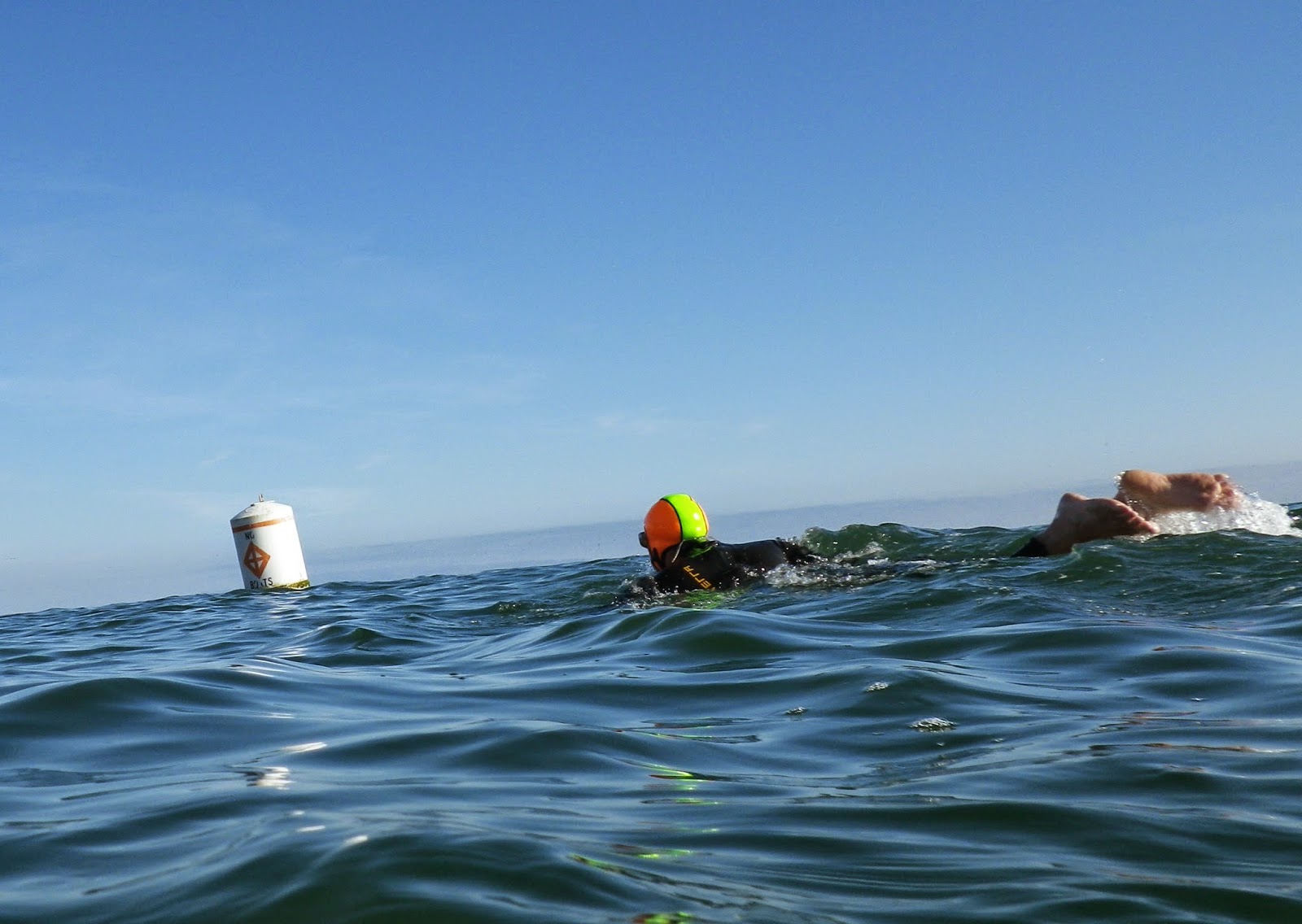 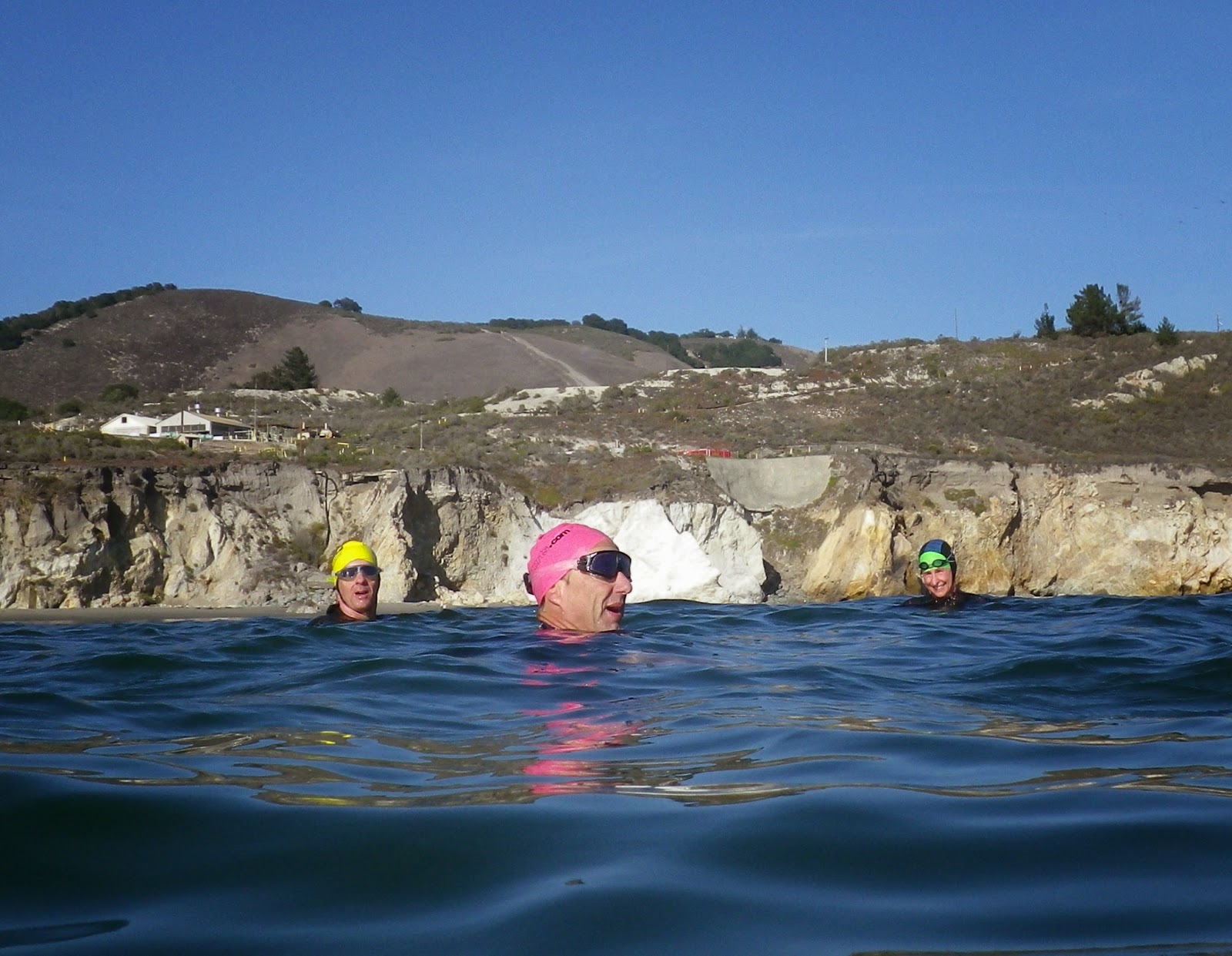 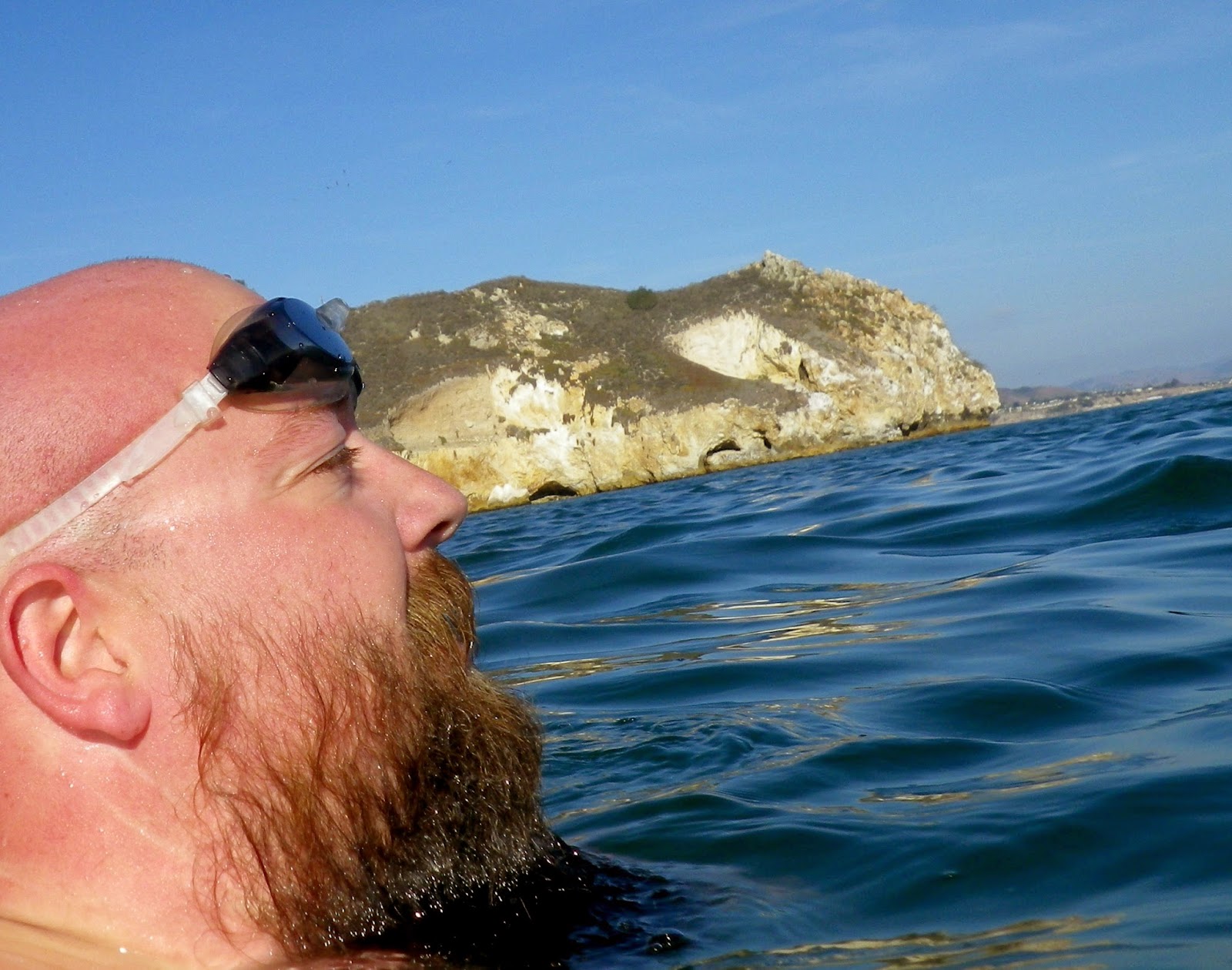 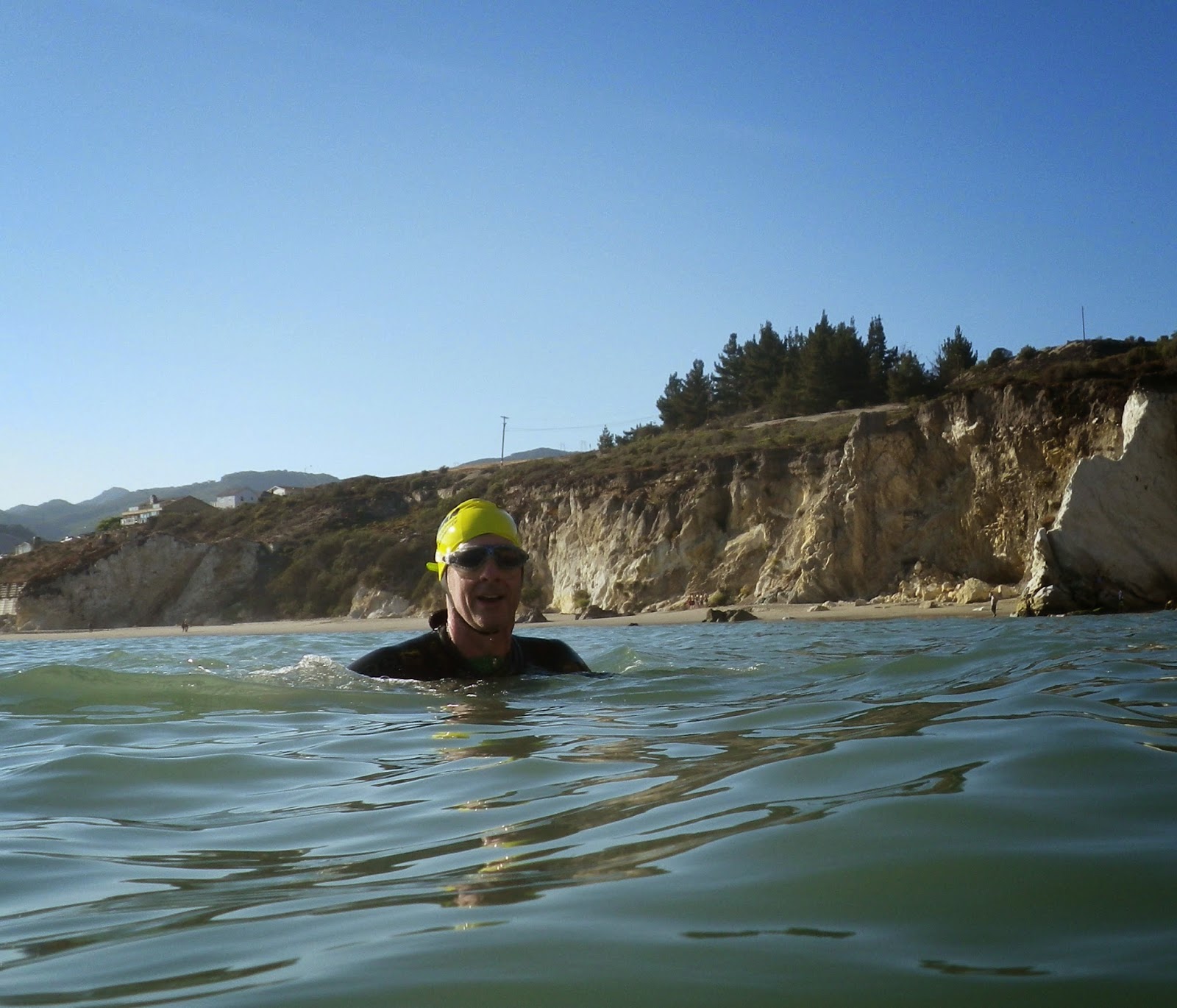 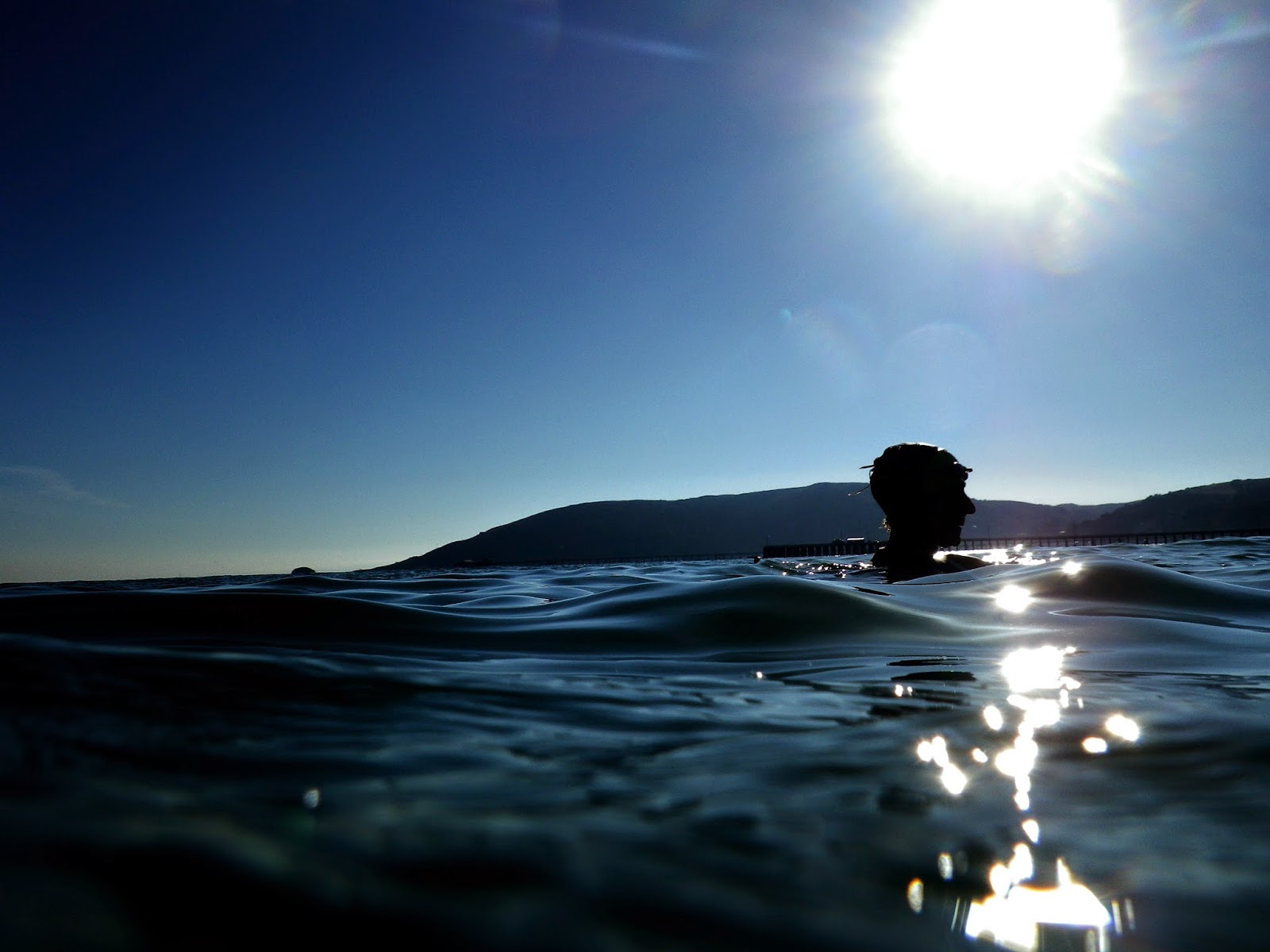 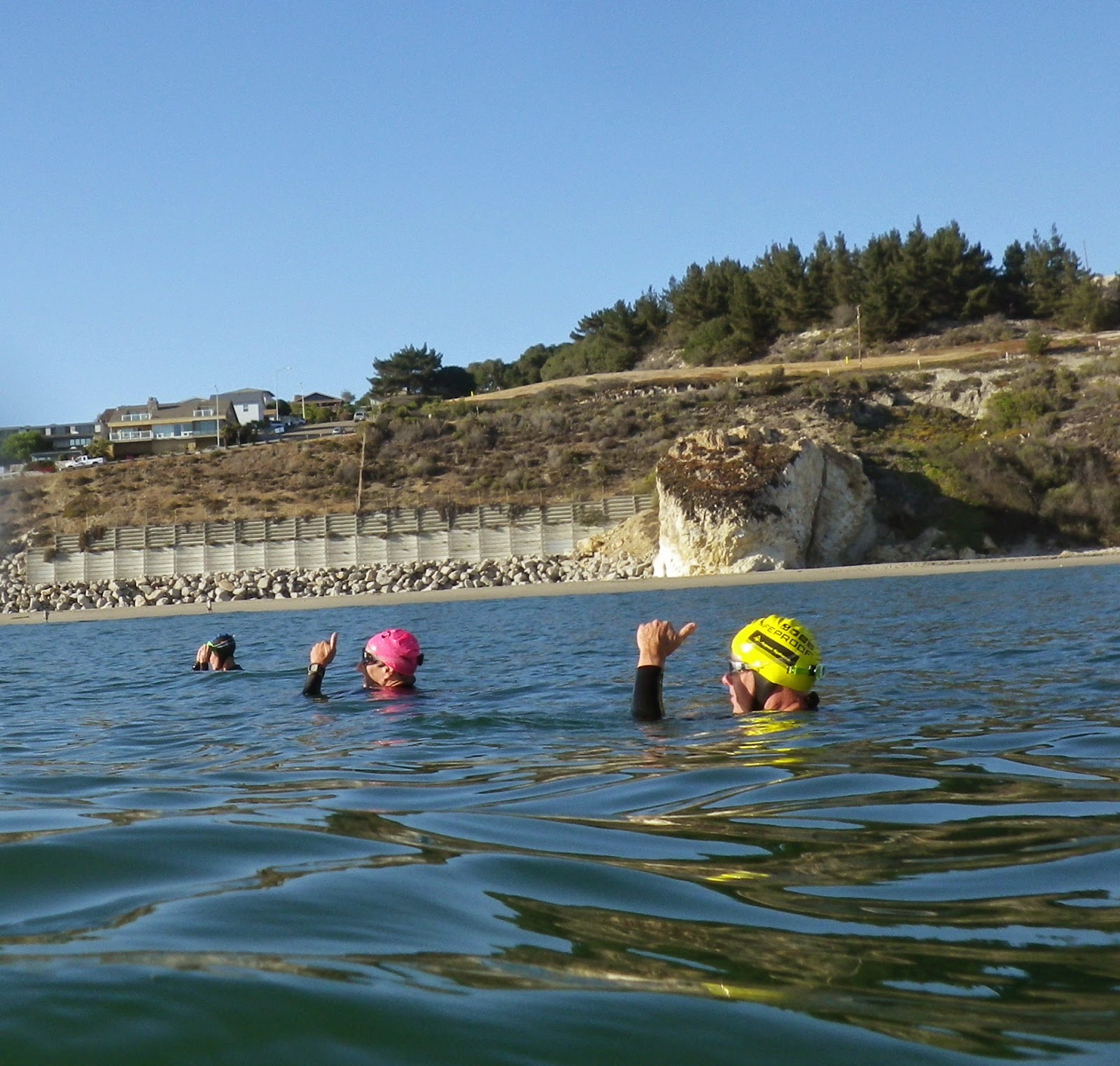 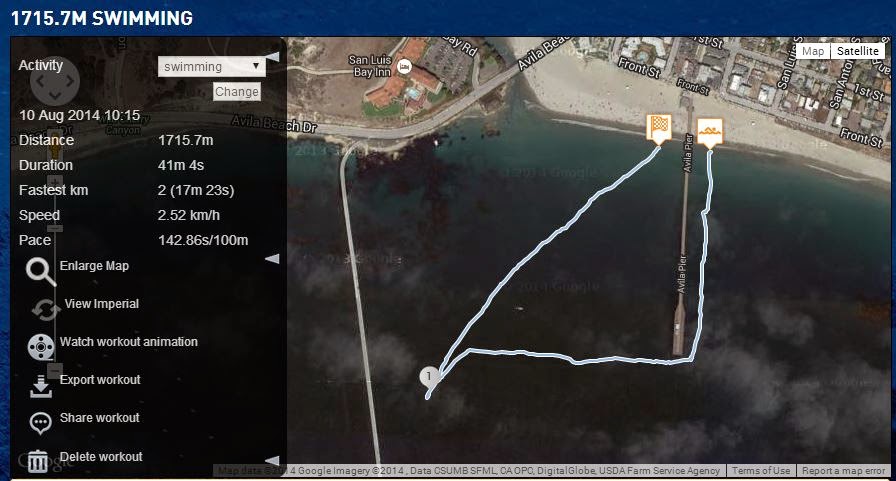 It was gray and calm at Avila Beach this morning but the came out just as we were getting into the water.  Niel, Rick, Jon Harmse, Duke and Eric had a route of about a mile planned.  There water temperature was 62.  There were a lot of kelpy bits and a seal or two in the water and a few pelicans but it was pretty empty.  We planned to go to the end of the Avila Pier, over to our usual spot at the cross bracing that is a third of the way along the Poly Pier and back to the beach.  On the leg to the Poly Pier Eric and I were to the left of Jon, Rick and Duke.  This was Eric's second ocean swim with us and he made the simple mistake of picking up the wrong set of cross bracing on one of his siting and heading for a spot farther left along the pier.  I swung over to pick him up and both groups started back to the beach at the same time.  Once we were back on the beach Duke and Angela went out for a swim along the buoy line.  Rhonda joined us for the post swim bench racing. (Any car people out there remember that term? What's the multi-sport equivalent?)
I'll be back Wednesday.  Gott'a go ahead and get more spoiled by this warm water while it lasts. 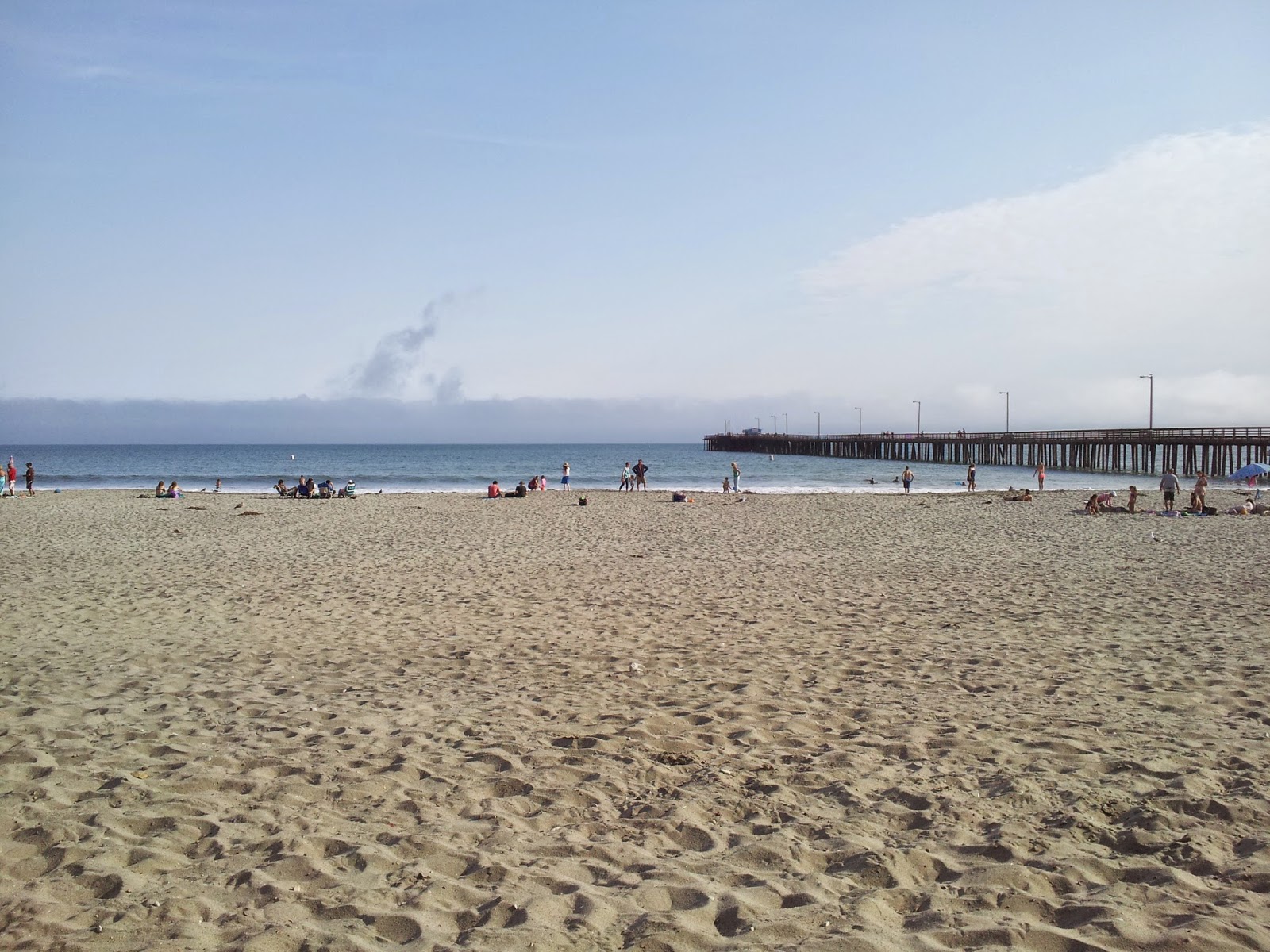 Here is the view from my sand chair this evening .  Avila Beach was sunny, breezy and a very nice place to unwind after a busy day.  I was not swimming because I'm too much of a water wimp to get in without my wetsuit and it will be a few days yet before my poison oak clears up enough to make the wetsuit a good idea.  But, the beach was nice and relaxing all the same. Someone should have been in the water.  It was 62.5 degrees and choppy but not whitecapped.  It would have been a nice swim.  Perhaps Sunday.

I was late getting to the beach and did not swim but we did have 5 regulars and a new friend join us.  The conditions were nice; there were high clouds and a slight wind, small waves and flat water.  There was some sailboat racing under way so the swimmers stuck to the buoy line. Duke and Angela did the left side of the buoy line.  Gerry Gross and Sylvia did buoy line laps on their own.  John Hampsey swam to Fossil Point and down to the creek. Eric came down from Paso Robles to join us for the first time.  He was out there with John but I'm not sure how far he swam.  The estimated of the water temperature were from the high 50's to the low 60's.