Hey, we got to swim today. The weather cleared, the creek is still dirty but our getting in time was just after high tide so all of the poo from the creek would be heading straight out to sea away from the beach, so , we planned a swim on the side of the pier opposite the creek. At high tide I can get an Avila Beach water temperature from the pier, so we knew that the water was 52 degrees. Access to the pier is limited to a short distance from shore because the pier has structural deficiencies that make it unsafe. Unfortunately, the  Port San Luis Harbor Commission which has responsibility for the pier has no plans to have it repaired.

There was no swimming at Avila Beach today.

The water quality was iffy and swimming was questionable, and then there was a sewage spill in San Luis Obispo that put thousands of gallons of raw sewage into San Luis Obispo Creek, so, definitly no swimming today.    :-( 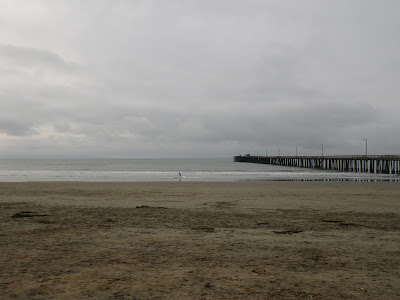 This Sunday was a big change from last weekend, no more warm sun and crowds on the beach. It was overcast, about 50 degrees and felt very wintery. A new storm was coming in so we had a onshore wind, a swell out of the SE and some one foot chop. The waves were 2 - 3'+. The creek had dirtied up this past week so we stayed on the left side of the pier away from the creek mouth.  The water temperature was 52 degrees, but somehow felt better than last week, perhaps because today the air and water temperature were the same.

Niel, Amy, Heidi, John and Johnny swam a triangle on the left side of the pier. Out along the pier I could really feel the push of the swell towards the beach. The second leg was across the chop, which was messy but fun and the last leg back to the pier we had a nice push from the swell.