Concerns about water quality and stormy conditions kept all of the regular swimmers out of the water. Steve Walker had emailed me. He was going to be in town and was interested in swimming with us. He showed up and ran into Peter Kelly. Pete's story about Steve's swim follows:

Here is what happened yesterday, the 30th
I went down at 11 to see if anyone was swimming. the red tide was in full bloom and the sea was as nasty as it's been all year. Only one lonely soul on the beach, wearing a speedo and carrying a swim bag. He headed toward the lifeguard stand and I met him there. The lifeguard asked if I was going to swim and I said no because of the conditions. The speedo man said he was going to swim and started asking me about distances, like, How far from Whiterock to the pier? I asked him if he was an experienced open ocean swimmer and he replied" English, Irish, and Catalina channels" as well as others. He was attempting Ocean Sevens and only had Molokai and the Japanese Island channel to accomplish that. He said his daughter was going to meet him at four so he was going to swim for about three and a half hours. In he went swimming towards White Rock on the roughest day this year.!
I went home and googled him. His name is Steve Walker, he swims with the South End Rowing Club in S.F. He just released a new book, "Where the crazy people Swim". So, after three hours I returned to the life guard stand, he had come in, drank some water, ate a  couple of power bars and continued swimming! When he finished, an hour later. he took a hot shower at the Yacht Club and I snapped this picture! We shot the bull and his daughter came and picked him up. He is on his way to San Pedro for the Catalina Channel Banquet and also the Rough Water Swimming Gala!
We traced his swim on a chart in the yacht club, a little over eight miles on the Gnarliest day of the year!
Please forward to all Dolphins,
Pete Kelley
p.s. The big black dolphin passed in front of the life guard stand, in the surf, 5 minutes before he finished. You can purchase his book on Amazon. 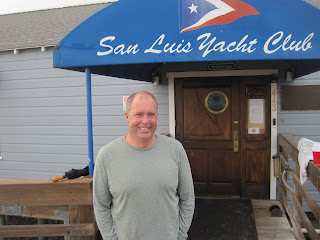 I wish that I had shown up so I could have met him.

We have two swim plots today, Heidi's for her, John's and Amy's swim

while Duke, Tom and Michael swam to Fossil Point and back.

The eight buoys marking the swimming zone have been removed for the winter. Duke says that now there will be fewer things to run into while swimming. 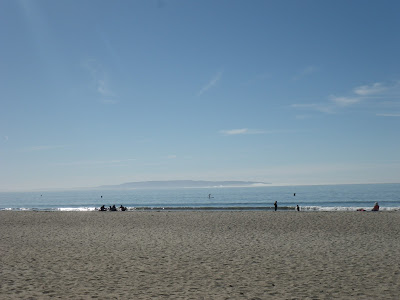 We had perfect fall conditions at Avila Beach today; it was warm and sunny with no wind or crowds and very clear 57 degree water.
Swimming today were Duke, Niel, Amy, John, Tom, Leslie and Michael.  We had a large pod of dolphins do an east to west drive by as we were getting ready to get in. In spite of what the plot from my Garmin shows we swam the standard triangle route counterclockwise without a crazy detour back through the pier. 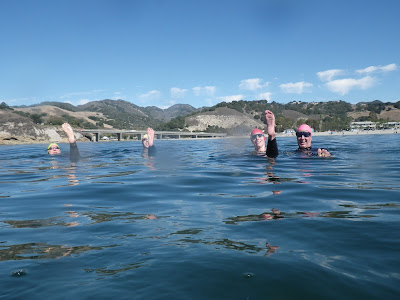 It was a startling day at Avila—serene and bright, quiet and warm. Parking was readily available and at 10:45am there were only three groups of people on the beach south of the pier. We had a small group of swimmers—Amy, Heidi, sisters Sammie and Sydney, Pete, Sylvia, and myself. Pete and Sylvia did their own thing; the other five of us swam along the buoy line south. The ocean was glassy and smooth when we entered, and amazingly clear. Water temp was on the cool side, about 56 degrees, and there were intermittent 5-6 foot waves that seemed to rise up out of nowhere and majestically roll into shore. After reaching the 4th buoy we decided to head to the end of the pier through a water surface that was now undulating and against a fairly strong current. As we approached the pier, conditions altered again and we found ourselves surrounded by a playfully choppy sea with white caps. At times it seemed like we were surfing the water with our faces. From there we swam to the second buoy on the north side, under the pier and back to the beach. Near the shore Sammie and Sydney frolicked in the waves, the water so clean they could count the hermit crabs on the ocean floor. It was a fantastic swim (distance .85 miles) on a gorgeous and sublime day.

Thanks to John Hampsey for writing this Sunday's blog post.

Rhonda Marina will be competing in Kona this Saturday so send good strong thoughts her way all day.