I was out of town for the first swim at Avila Beach in many weeks, so this post is a combined effort by John, Heidi and Amy. 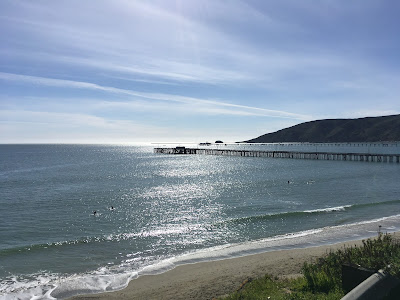 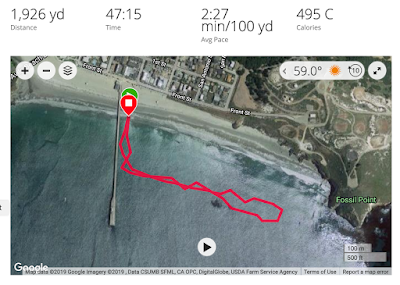 Sunday Feb. 24, 2019
The Avila Dolphins had not been back in the sea for four weeks due to the constant rains and subsequent high bacteria count. But today was gorgeous in every way—sunny sky, air temp of 66, the water clear and pristine. The surface was choppy in places and there was a curious rip current swirling like a sea-creek from the middle of the pier to the midpoint of the beach.
Swimming today were Theresa, Paul, Duke, Maria, Heidi, Jonny, Pete, Amy, and myself. There was a comic element to our entry into the sea because the winter storms had reconstituted the ocean floor and, after wading in about fifty yards, we were shocked to be on a sandbar standing ankle-deep. Folks from the shore believed we were walking on water.

Our swim route took us 1/3 of the way along the Avila Pier before we turned south. Eventually, we split into two groups. The larger group continued to fossil point, followed by a return to the middle of the pier and back to shore.  (see Heidi’s gps map)

Group two—Jonny, Amy, and I—pivoted near the reef buoy and headed out to the end of Avila Pier. Although the water was a manageable 54 degrees near shore, farther out to sea the temp was a chilling 51 degrees, which meant we were all a bit jaw-frozen and claw-handed by the last leg of the swim. No matter, we were ecstatic to be back in the water and have our souls renewed. Swim distance—one mile. Swim time—45 minutes.

Afterward, lollygagging with our coffee in the bright sunlight, our hands and bodies warmed up quickly. It was a fantastico swim and day.
---John Hampsey

Perfect recap, John! You didn’t mention that you mistook Jonny for me and thought, in dismay, that I had “gone on.” Nor that I was so cold I had trouble ordering coffee! But you captured the stunning essence.