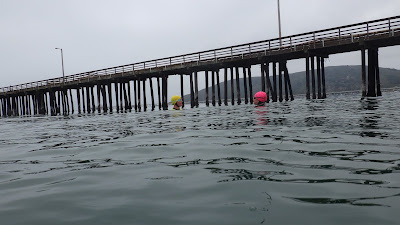 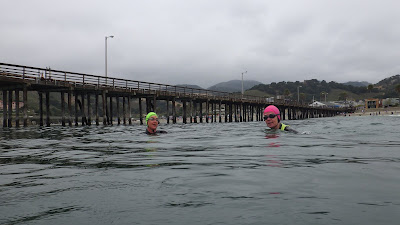 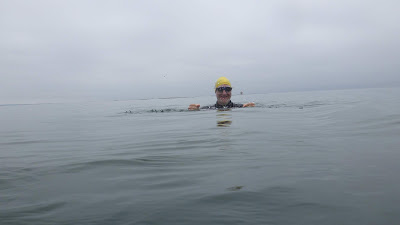 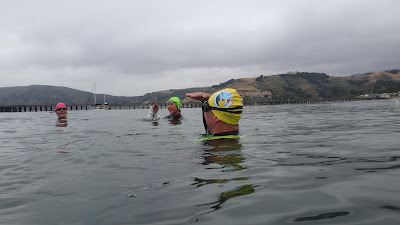 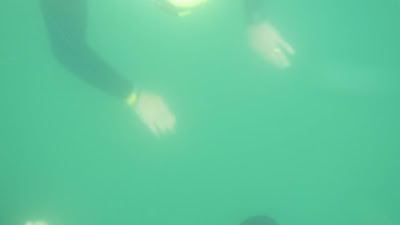 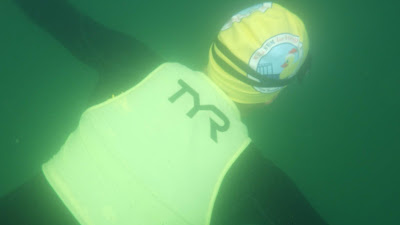 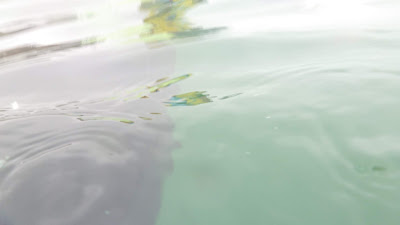 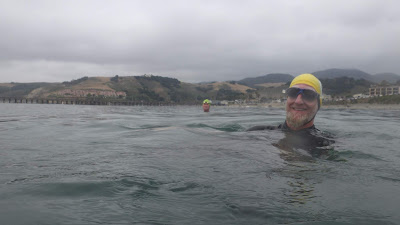 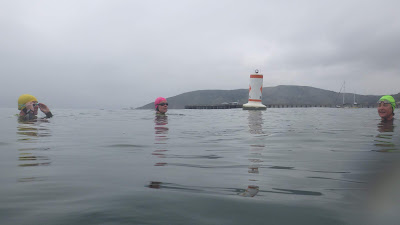 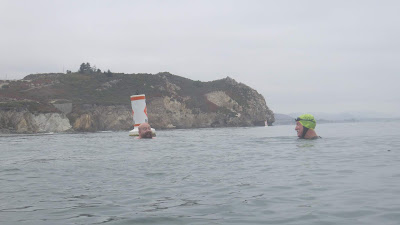 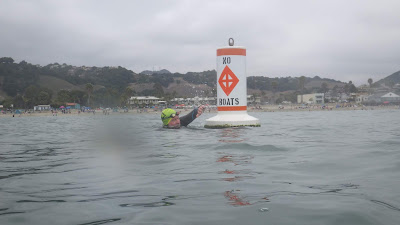 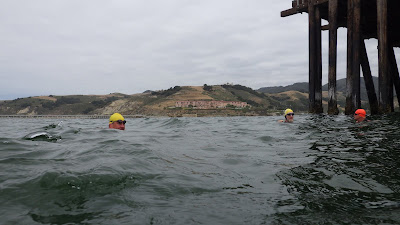 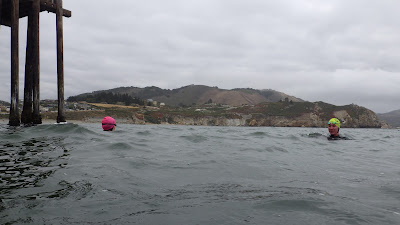 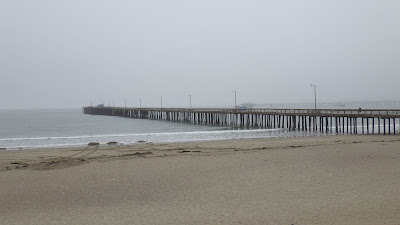 Duke's was looking for someone to pal up with for extra swims at Avila while his usual pool was closed.I was interested in a little hookey so we met at the beach on Thursday morning and got in a long mile. It seemed to be flat, grey and windless but the sun came out and we had a strong chop and current out of the SW to give the route some personality.  We had a nice swim that was an excellent way to break up a work day. 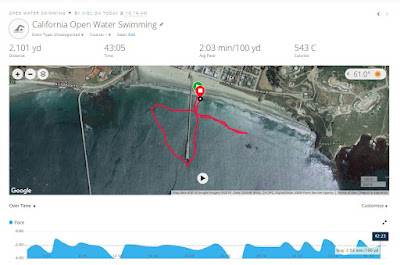 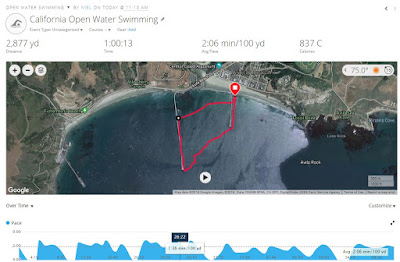 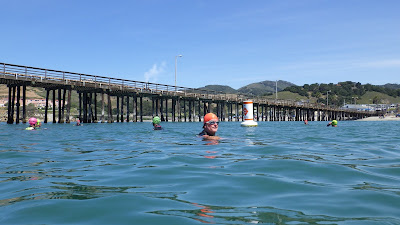 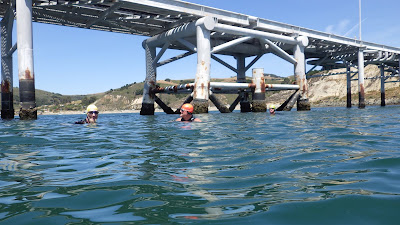 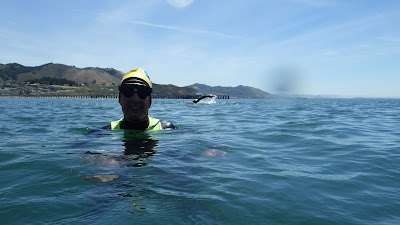 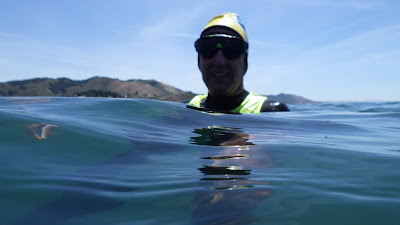 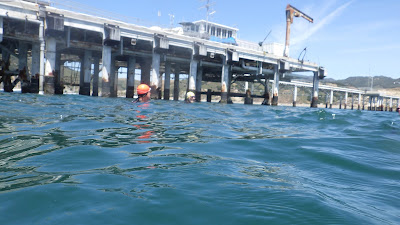 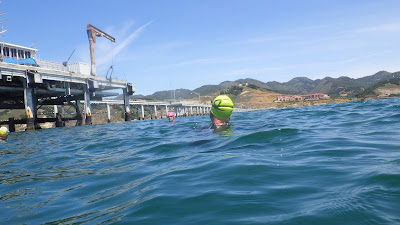 
I was out of town for today's swim but Tom sent me this description:

First off, no matter what others say, it was not 57 degrees.  It was more like 55-56.  June gloom for most of the swim, partially burning off towards the end.  We had a couple kayakers courtesy of Jonny – they stayed at the front and back of the group until we got to the rock, then the lead kayaker decided he’d let Jim & I return on our own, so we did.  Water was kinda choppy, with the swell pushing us sideways a bit.

On to the pictures…

Ok, that’s the news from this week’s Avila swim… 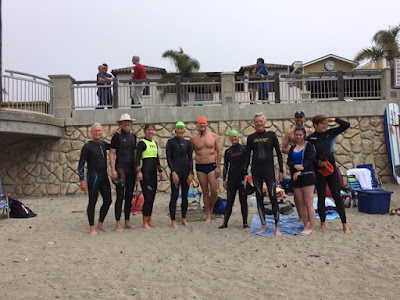 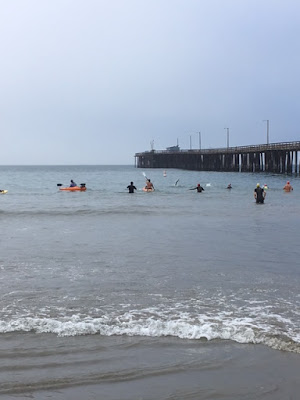 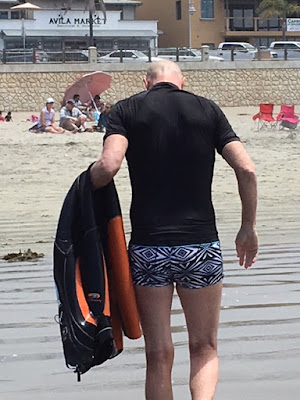 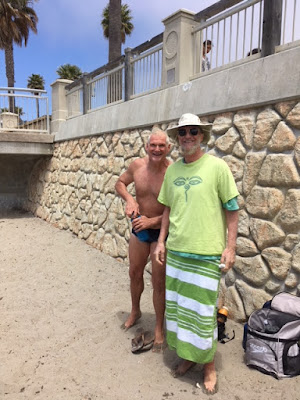 Sunday, June 3, 2018
Today we made a serendipitous swim to Avila Rock. About three quarters of a mile off-shore, Avila Rock mesmerizes us 12 months of the year. But we had not journeyed to it in over two years. Swimming today were Maria, Heidi, Duke, Jonny, Amy, Jim, Tom, and myself. We would not have been able to make our jaunty swim to the Rock if we had not had the minimum safety requirement of two paddlers, which Jonny artfully arranged. Thus, somewhat miraculously, Sean and Monica were suddenly there as our trusty kayak-consorts.
Beneath a semi-foggy and mystical sky, we headed south along the buoy line. At the fourth buoy we turned south-west and began our half mile dash to the ever illusive Avila Rock. The water was a kind 56 degrees, shockingly clear, and mostly smooth. At several points during the outward leg of our swim, metaphysical doubt set in—no matter how hard we stroked, the Rock seemed to get no closer. Nevertheless, we made our way... the only hazard being a nearly invisible kelp-bed. Some veered to the left of it; others found a narrow passage through the giant algae.
Upon finally reaching the Rock and circling to the western side, the greenish-blue water was truly open-sea like—roiling and churning. And surprising all of us, was an orange buoy we had not seen before, about 30 yards NW of the rock. Some thought it to be a newly implanted turning point for an imminent boating race. Others thought it to be a warning buoy for boats to stay clear of the Rock with its extensive jagged western edge looming just a few feet below the ocean’s surface. Between the buoy and the Rock, a few of us nudged up against a two-foot wide, milk-white, melancholy jellyfish that meant us no harm.
The return swim seemed, as it often does, to unfold more quickly, even with the water having significantly more chop. By the time everyone was back on the beach nearly an hour and a half had elapsed; our swim distance being about 1.6 miles. After showering and settling in with our coffee, the fog finally retreated and we enjoyed a sun-bright moment of comradery...  staring out toward Avila Rock that once again seemed sublime and ever-distant. We knew, even after swimming all the way there, we had barely glimpsed its secret.
--John Hampsey

I will leave it up to you readers to guess which post was written by the Cal Poly English professor.