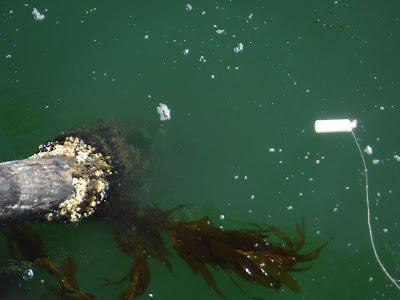 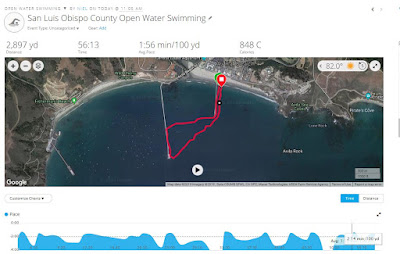 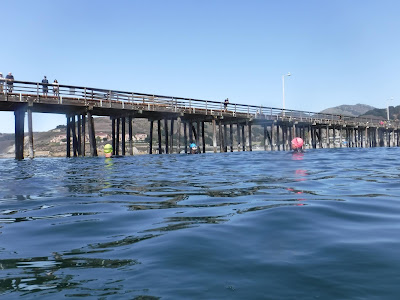 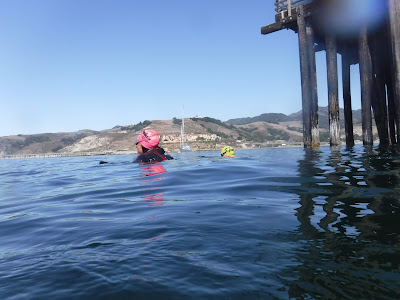 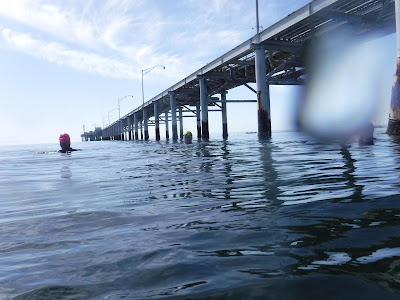 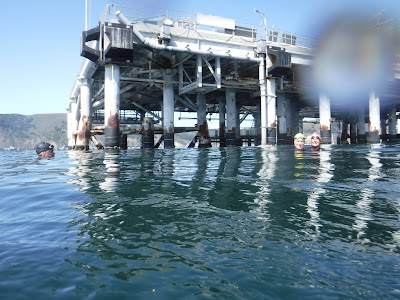 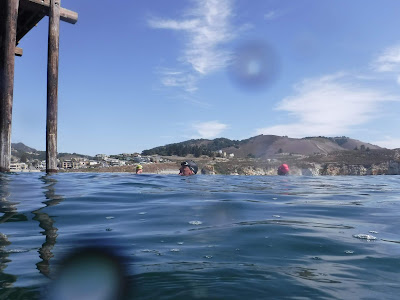 After two 100 degree days in San Luis Obispo I was expecting and hoping for a very summery day at the beach, but, the high pressure that had been pushing the warm are to the coase collapsed Saturday evening and the fog came in. It cooled things off nicely in San Luis Obispo and had Avila Beach wrapped in complete grey. 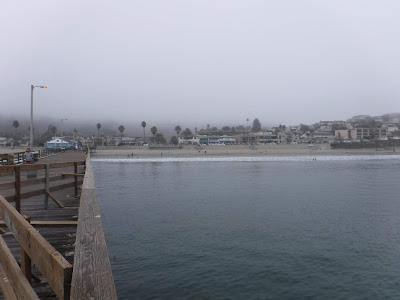 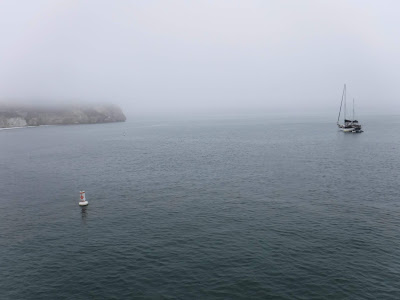 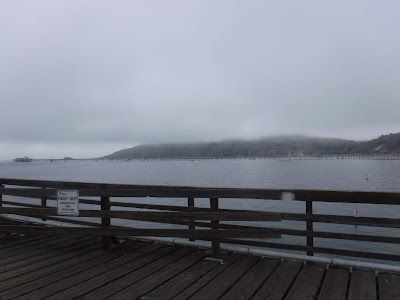 The slot of light off to the west held some promise but I
would not make a guess if it was going to clear.

The silver lining was that the water temperature was 62 (Heidi measured 59) and the conditions were flat and windless.
We decided to do a counterclockwise triangle for about a mile with a Cal Poly Pier add on  option for about a mile and a half. 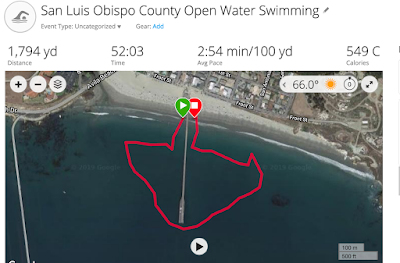 Swimming today were regulars Niel, Heidi, Brenda, Maria, Amy, Stephanie and John with Tim making it his second swim and Max, Mike, and Jim joining us for the first time. 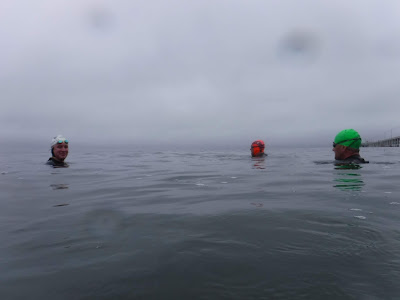 Stephanie, Jim and Mike at the Cal Poly Pier. 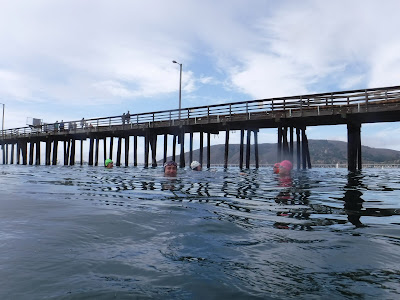 The two groups came back together at the finish at the first buoy
on the east side of the Avila Pier.
Maria, Max, Stephanie, Jim and Brenda.
The sun broke through at the end of the swim,  just in time to warm up the beach. 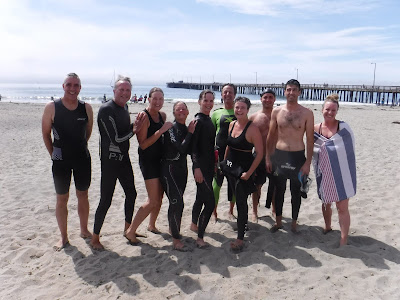 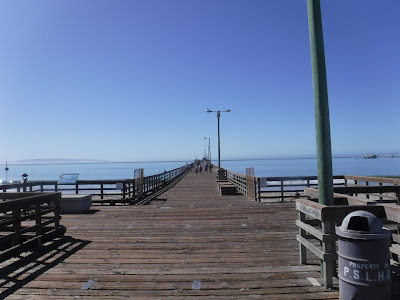 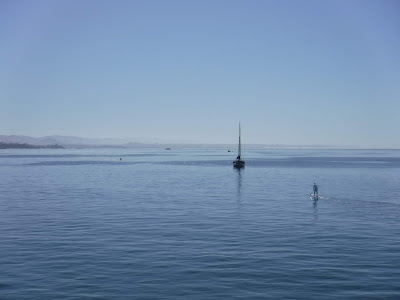 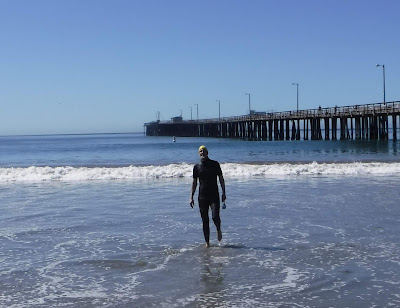 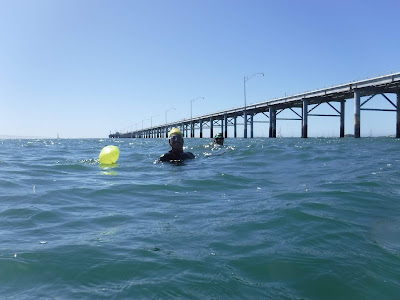 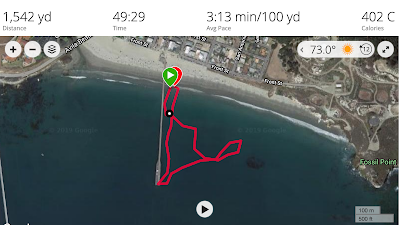 Niel and Craig got in the water at 9 and did a counterclockwise triangle. The sun was already out and the water temperature was about 60+. There was a very light breeze and a swell out of the SE that was hard to see from shore but that gave the swim a bit of vertical motion and push and pull. A great way to begin the day! 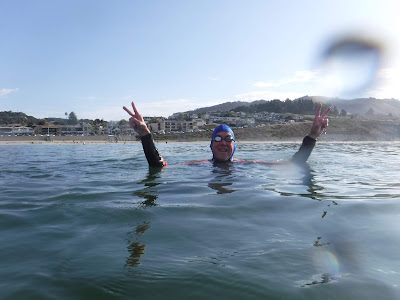 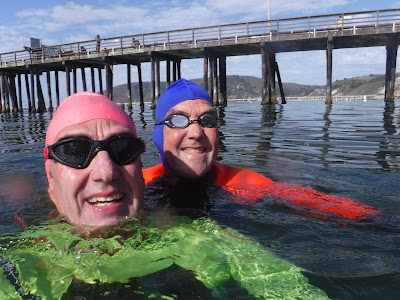 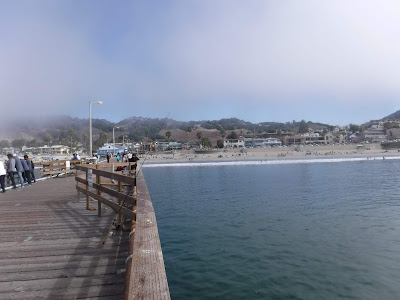 Avila Beach cleared early today giving us warm and sunny skies and 62 degree water. There have been reports of red tides in Pismo but the water at Avila was clean. It was flat and windless.

Niel, Tom, Chris, Stephanie, Tim and Brenda swam on the west side of the pier. John, Amy, AnneMarie and Brenda decided to swim on the east side.

I have not seen any bait balls since last summer but today there was a huge one 200M beyond and to the east of the end of the Avila Pier. While we were getting ready it moved onshore, inside the end of the pier. We decided to swim on the opposite (west) side of the pier to the mouth of the creek and make it up our route from there.
By the time we were wading in the bait ball had moved to the west side of the pier so we swam west to the creek mouth and evaluated the situation. It looked like the bait ball might be moving over towards the Cal Poly Pier, which had been our original destination, so we decided to do two laps of the buoy line on the west side. 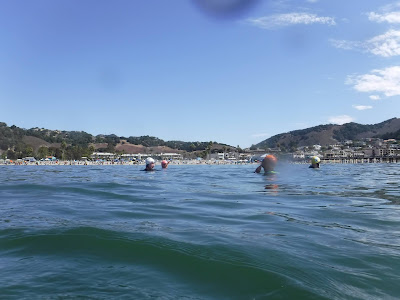 This is Stephanie, Tim, Chris and Tom on our second stop at the last buoy at the mouth of San Luis Obispo Creek. Tom is looking to the east because is noticing a large gray porpoise swimming past within 20' of our group.

John, Amy and Brenda swam on the east side, down to Fossil Point and back.

Duke and Marguerite swam over near the Harford Pier, from the kayak rental shack to the base of the breakwater and back.

I am going to swim at Avila tomorrow morning. In the water at 9, done and home in time for our block party at 11. Might be foggy but the water will flat and the parking easy.
Join me and earn the ability to have a guilt free piece of pie tomorrow afternoon.