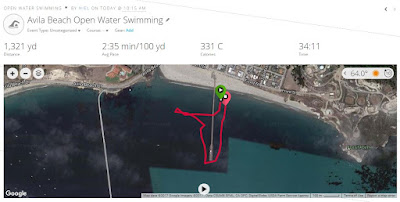 Jonny, Heidi, Christina, Maria and Niel swam today and we had real ocean conditions for our swim.  The air temperature was about 60 degrees with thin high clouds cutting down on sunshine.  There was a strong and steady wind out of the NW that was making flags standing straight out and umbrellas take off down the beach.  When we were getting in there was 6 to 12 inch chop but not yet any whitecaps. I had recorded a water temperature of 52 degrees from our pier.
The water temperature took 1 to 2 degree drop when we cleared the surf line. We swam under the pier and down the beach towards the last buoy at the creek mouth.  In the water the chop was more like a foot plus with a strong current making it a lot of work to make headway and to try and not swallow too much water. The was Christina's first time in rough conditions. It was cold, windy and she was trying a new top that was opening up in the water, so she headed for the beach. Jonny went with her. The rest of us went to the last buoy and came back along the buoy line and picked up Jonny.  We swam to the end of the pier and then in along the lee side of the pier.  We all had a great swim but .75 miles was enough.
The leg down to the buoy at the creek mouth was almost into the wind and if you could figure out the chop it was just work. The leg out to the end of the pier was across the chop and was rough. I was doing best by breathing on my right so I could see when the chop was going to break over my head and catch a breathe on the left side. Coming in along the lee of the pier was the easiest leg as we had a bit of a push.


In June of last year we were enjoying water temperatures in the upper 50's.  If we see that again this year it will be time to start planning some longer swims.