We had wonderful conditions and a big group today. It was sunny, warm and windless with the usual Avila 2 to 3 foot surf. The best part was that the SW swell that had been with us earlier in the week was gone and with it the red tide. The water was a beautiful color with good visibility and warm at 64.5 degrees F or 18.056 degrees C.
Swimming today were Niel, Sylvia, Stephanie, Heidi, Sarah, Sam, Sydney, Tom, Rob, Jonny, Duke, Hillary, John, Sue, Peter, Pete and Maria. Also two or three of Sarah's lifeguards joined us but I didn't get their names.
With this many people we has several different swims; one group swam down the beach, over to the Cal Poly Pier, to the Avila Pier and in while there were one or two shorter versions. 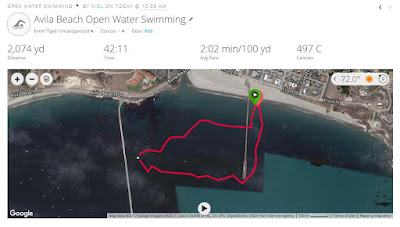 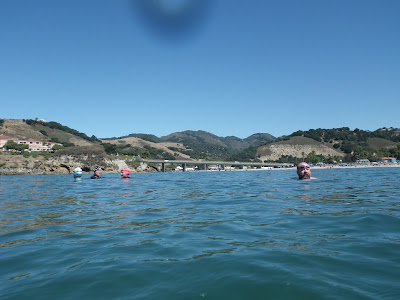 Sydney, Duke, Sam and Rob at the last buoy at the creek mouth. 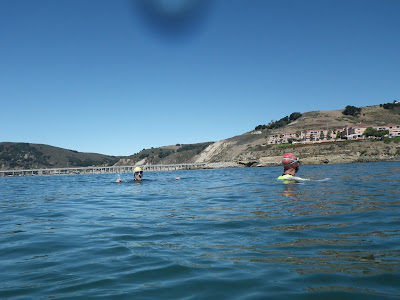 Tom 'Waterspout' Lorish and Hillary at the same spot 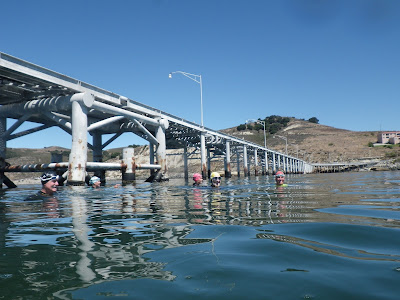 A number of people would like to swim this Wednesday evening at 6. I'll be there and I how most of them can join me.

I won't be swimming next Sunday of Wednesday of the following week so Duke will be the Beachmaster. Give him the respect that he deserves.  ;-)