It was another beautiful day at Avila Beach. There was a bank of fog that extended from behind the hills at the port, all of the way around the horizon to Shell Beach, leaving Avila in a hole full of sun. There was no wind, small breakers, no chop and no seals or bird life over the ocean. I did a toe test of the water temperature and came up with 'probably 55 or above' on the twinkle toes scale. My new thermometer is on the way so we will be back to the Fahrenheit scale for water temperatures soon. Niel, Rob, Chad and Peter were swimming. Kim came by to visit and enjoy the sun. Nobody seemed to be too full of energy so we elected to repeat Wednesday nights swim of down to Fossil Point and back. Rob headed down to the surf first, perhaps to give himself time to get used to the water and expound to the gulls in private on the joys of the traditional approach to ocean swimming while the rest of us were finishing getting into our wetsuits. We caught up to him in the surf line and headed towards the point. When we regrouped at the end of the seawall there was a consensus that the water temperature felt colder than Wednesday night, therefor it must be about 55. I wished that I had the ability to get a reading so I could compare our impressions with a thermometer. I could not help but wonder what we would of thought of the conditions if I had taken a reading of 53, or 58? In any case we had a nice swim. There was a lot of kelp debris in the water down towards the point. We regrouped at the point and again at the end of the seawall on the way back. It was warm and relaxing on the beach afterwards.
This Wednesday will be the last evening swim of the season. I know that Rob and Ryan will join me. We'll get in at 5:30 for a short swim. Everybody's welcome.
niel 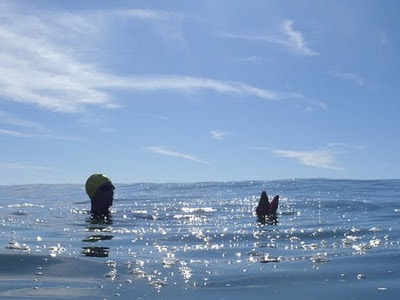