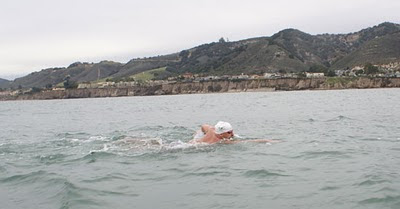 Rob Dumouchel completed his Avila to Pismo, Pier to Pier Swim today!
I believe that this is the first time that this swim has been done in the winter and the conditions were very challenging. There was a storm coming into our area this morning that made this a very tough swim. I had a measured water temperature of 53 to 54 degrees for the entire route. There was a stiff and consistent wind out of the SE (from Pismo) that was pushing up a one foot chop that was occasionally breaking. The chop was riding over a 3 to 6 foot swell out of the SW. The wind and chop were coming straight at him for the entire swim. Rob started from the beach on the port side of the Avila Pier and completed his swim by walking out of the water on the south side of the Pismo a little over 4 hours later, the conditions having added about one hour to his time in the water. We picked up some light rain at about the third hour, which actually helped out as the wind dropped down a notch or two with the rain. Rob was accompanied by the Zodiac from Seaweed Express from Port San Luis maned by Captain Mike and his mate. I was paddling the kayak and providing feedings. Robs friend Chris was in the Zodaic putting up an experimental live streaming video feed. Rob even took the time to take some of his own pictures with the camera he carried tucked in his suit! Rob stopped every 25 minutes for a feeding. After one Gu packet at his second feeding Rob stayed with just liquids for the rest of the swim. Dave van Mouwerik and Chip Watkins were at the start to support Rob and I believe that Dave was the first one to greet him when he stepped out of the water at Pismo.
This was one tough swim and a great accomplishment. Keep an eye on Rob's website at www.robaquatics..com for Rob's own comments on his swim and the the photos!
niel 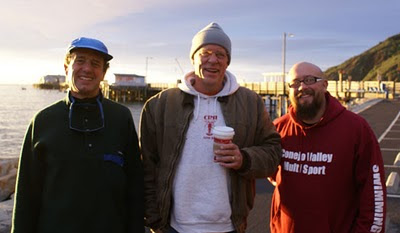 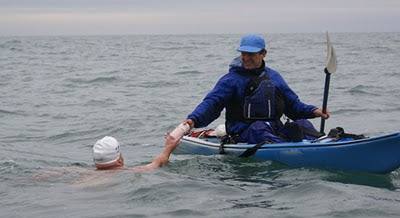 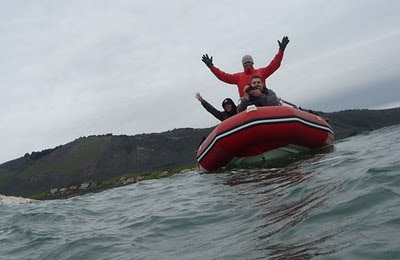