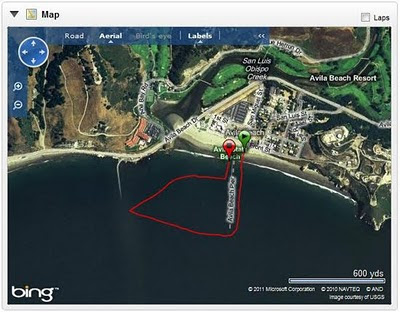 It was so beautiful today that Rob and I conspired to sneak off to Avila for a noon swim. It was sunny, warm and calm with not much of anything in or on the water and only a few other hooky minded people on the beach. The water temperature was 55 with flat surface conditions and small waves. We decided to go someplace different today and headed straight out to the end of the pier. From there we turned towards the Cal Poly Pier, intending to swim to the second set of crossbars which are about a third of the way out along the pier from shore. The Cal Poly Pier is considerably longer than the Avila Pier so our route put was only slightly less than parallel to shore. About a third of the way there we swam into a sudden chop that was just less than head high and coming almost head on. It was not tough to swim into but it was pesky. Once at the Poly Pier we turned towards the buoy at the creek mouth and from there came in along the buoy line to the Avila Pier, and turned in to the beach. Rob's GPS said that we had covered 2K in 38 minutes. It was so beautiful on the sand that having some adult stuff to do is the only thing that got us off of the beach.
Rob and I are going to try and swim again on Thursday around mid-day. Anybody else want to come and play?
niel 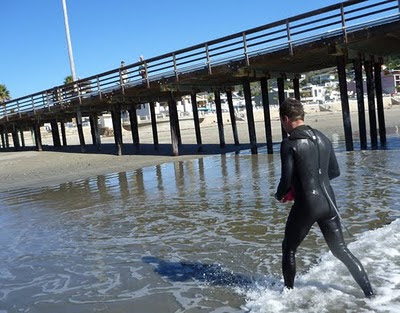