Avila Beach at 10:30 was gray, with solid overcast and calm with a glassy surface on the water. The water looked very clean and the waves were limited to an occasional 2+ footer. I measured a water temperature of 59 but later the swimmers consensus was that it was 57 -58. Sylvia and Yvonne went out early and swam the buoy line. There were out before the rest of us started and said that the water felt cold. I do not know if this was because of the overcast, because a lack of sunshine can really make a difference in how the water feels. The 11 o'clock group all swam the same route; the triangle counterclockwise. Swimming today were Niel, Rob, Duke, Chad, Liz, Ryan, Kimber, Amy, Margaret and Ed. By the time we were finishing the wind was showing up and starting to mess up the surface so our timing was just right. The sun came out as the wind rose so we had a warm and sunny beach to relax on after the swim.
We had several new swimmers today so please let me know if I got any names wrong.
Niel, Rob and Sylvia swam the 38th Santa Cruz Rough Water Swim on Saturday. This is a 1 mile no wetsuit swim around the Santa Cruz Pier. Sylvia tore up the field and finished first in her age group, 70 - 74 in 35.53! Rob finished in 24.05 minutes, 7th in the 30-34's and I put up a 28.11, 12th in the 60 -64's. Rob's GPS had his route at 1600M so the distance was right on. . The race organizers claimed a 58 degree water temperature, and it may have been close to that out at the end of the pier, but closer in to the shore it was more like 56.
niel 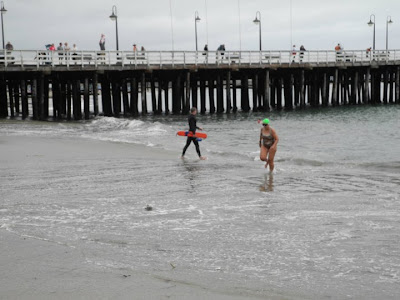 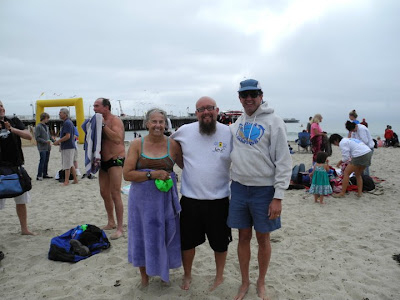 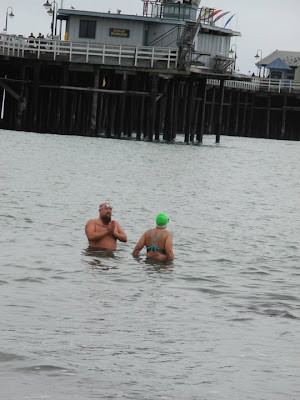 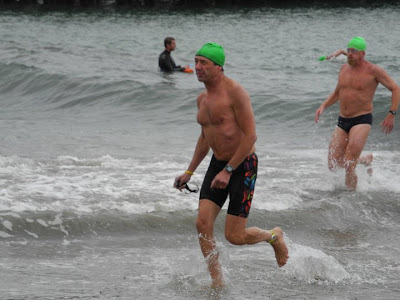