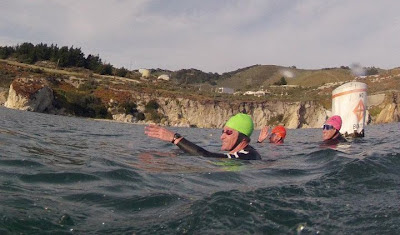 It was beautiful at Avila Beach at 5 PM. There was a gusty breeze but it was warm, in the upper 70's, and clear. The wind had set up a west to east current along the beach with some small chop. I got a water temperature of 52 and the water looked clear on both sides of the pier. Swimming this evening were John, Byron, Niel and Rob. Our first plan was to swim west to the creek and to then consider going over to the Poly Pier and doubling back, which would be about a mile swim. Getting in took some commitment but I kept telling myself that this was 4 degrees warmer than last weeks water so it should feel 'warm'. It still felt cold. By the time I got down to the end of the buoys at the creek I was tolerating the temperature. The chop was just enough to make things interesting but not very troublesome. John and Byron had to ask Rob, with his 'traditional' swimming costume, if he was 'getting comfortable'. Rob's answer was kind'a hard to translate, something in the way of 'no, I'm not comfortable but I'm OK with this'. OK or not, Rob felt better about heading for the end of the Avila Pier and doing the triangle route since this would keep us closer to the beach, so we headed that way. On this leg I focused on seeing how close I could keep to Byron (not even close, but it gave me a goal) and was feeling pretty good when we formed up at the end of the pier. We agreed to do the full triangle route so we headed towards the last buoy on the east side of the pier. Oh Boy! Not 5 strokes into this leg the water temperature dropped 2 or 3 degrees and never did seem to come back up much. We finished up by coming back along the buoys to the pier and in to the beach. It was still nice and warm on the sand after we got out. This swim took 33 minutes and covered just over a mile. 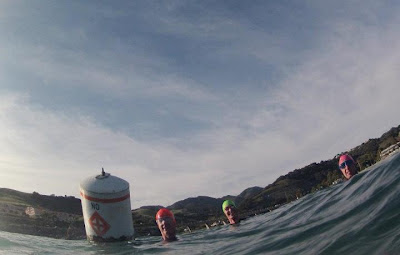 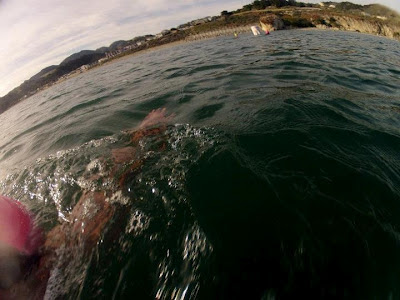 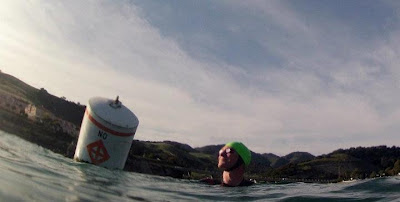 Quick notice for you guys thinking about hitting the beach on Sunday, there's an Earth Day event going on between the Sea Life Center and the Local Surfrider Chapter. There will be a dive clean up out at the port that you can observe and then a regular beach clean up going on at noon. The afternoon will have a carnival for the kids at the sea life center and adult beverages at Mr. Ricks for the rest of us :) - Rob D. 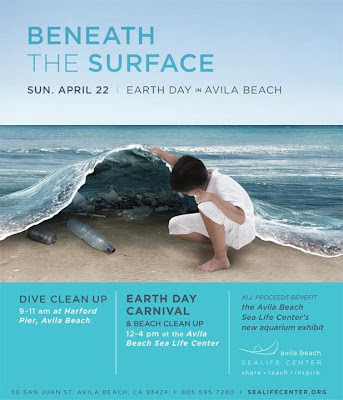