I'd Really Like To Speak to Whoever Is In Charge
This has been the spring for crazy wind and it is constantly messing with the water temperature.  Looking back to the start of the month we have had water temperatures of 56, 51, 58, 58, 54, 56, so I have been thinking about breaking out my spring suit and expecting water in the mid 50's.  However, Sunday's strong offshore winds pushed the water temperature down to an even 50 degrees.  The wind was still gusty and the water surface choppy at 11.  We did have some small dolphins working along the buoy line.   Sylvia had decided to sit this one out.  Yvonne, Niel, Byron, Duke and Rob got in.  Rob and I had planned another long swim today but I was not going to attempt it in these conditions.  We decided to swim straight out to the end of the pier and to then plan the rest of our swim depending on how we felt about the conditions.  When we grouped up at the end of the pier the consensus was that it felt really cold, and we decided to swim back in along the pier and get out.  Rob, Duke and I all had the same experience; the water felt cold getting in but did not have quite the bite we would of expected of 50 degrees, however,  it got really cold shortly after we started swimming.  As I was passing the buoy line on the way out I was starting to feel the cold through my wetsuit suit in my chest and arms which I never do.  Don't know what was different today but all of us except Rob were all happy to get out.  By the time we had gotten back to the beach (about 14 minutes) Rob had gotten used to the water and stayed in for a while trying to catch some waves.  He certainly lives up to his advertising. 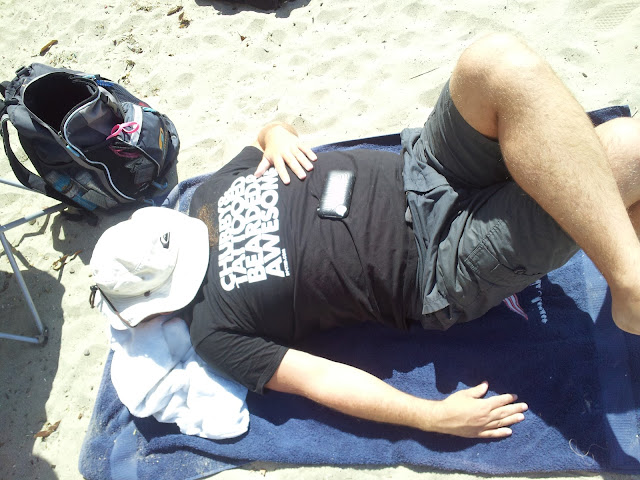 Monday, Memorial Day
It was just Rob, Niel and Kris today.  There was still lots of food for the pot luck.  It was still and hot at Avila with shade a much desired commodity.  There was only a slight wind but it was blowing directly offshore and offered no relief on the beach.  The water had warmed up to 51 degrees with knee high surf.   Rob and I waded in to cool off.  He stayed in and put in a determined effort to body surf something, but there wasn't anything to work with.   We ate lunch, got overheated and left before 1.