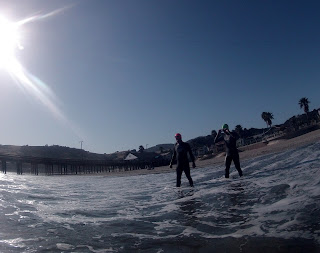 Today we had 3 swimmers hit the water - Rob, Damien and John - with Niel holding down the beach while he rests his shoulder. The weather was excellent and the wind is gone. We had a current running left to right across the beach but minimal chop/swell/surf. Niel measured 57 degrees in the water so warm Wednesday lives on!

We planned on doing the classic triangle route with stops at each corner being a little more important than usual since Damien is much, much faster than the rest of us. While we regrouped at the tip of the pier we really noticed the current pushing us out towards the poly pier.

At the creek buoy we ran into the Pale Kai Hawaiian Outrigger Canoe people paddling out. A boat detoured over to recommend maybe we get out of the ocean. According to them (via a text from their safety officer) a shark was spotted over at the pier (that we just came from) not too long ago. Initially we scoffed at the idea since most sightings are dolphins anyways but they seemed pretty concerned about it. We figured a swim straight to shore as opposed to down the buoy line and under the pier was probably the best course of action at that point. We started with 3 swimmers and finished with 3, I count that as a win :)

This weekend our regular 11am swim is going on but I'm planning on doing a 4 hour swim around it from 9am to 1pm. Feel free to join in as a swimmer or paddler during that time for however long you'd like. I'm looking to get in about 8ish miles... not a crazy fast pace but we'll keep things moving. Any questions let me know (rob@robaquatics) 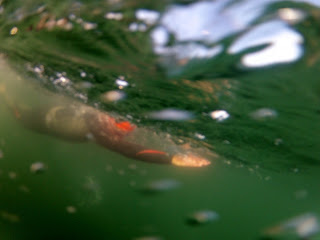 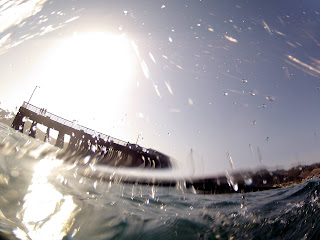 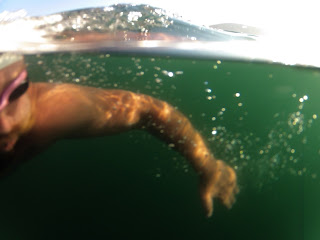 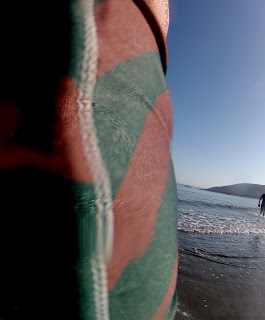