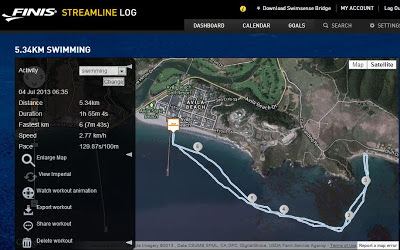 We has perfect conditions and a great turnout for today's Pirate Cove swim.  We were going to start early, at 7:30 AM, for easy parking and so some of the lifeguards could join us and still make it to their holiday shifts on time.  At 6:45 it was calm, the water was flat and there was a thick overcast but no fog.  Visibility was 4 to 5 miles.  The water temperature was 60 degrees, which was great because it had taken a dip earlier in the week towards the mid 50's.  We had planned this as a swim over to Pirate's Cove and back which would be a round trip distance of 3+ miles.  We have done this swim several times before and it is becoming a 4th of July tradition.  Swimming to the cove were Niel, Byron, Brad, John, Casey, Dave and Kate with lifeguards Phil, Lucas and Ian joining us.  We had five kayakers for support; Mark, Rob, Allison, Sharley and Jenny.  Sam was going to do a short swim along the buoy line and Sylvia and Yvonne were going to hang on the beach.  We got going on time, grouped up at the buoy line and headed for the inside of the rock off of Fossil Point.   We sorted out by speed into three groups so having 5 kayaks allowed all of us to have a navigator/lookout.  When swimming this far offshore and away from the beach there is always the possibility of a boat or jet ski crossing a swimmers path so having a kayak or paddleboard close by is a good idea.  There is a lot of kelp along this route so we did some kelp crawling near the rock and again near the turn into Pirate's Cove.  When we hauled up on the beach Leslie Lorish was there to greet us with coffee, water and snacks.  It was awesome to have goodies at the halfway point so Leslie deserves a huge thank you. 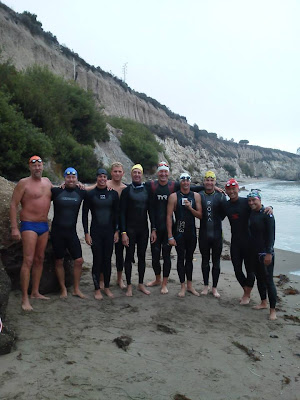 Phil, Lucas and Ian left us here so they could run back to Avila Beach.  I didn't see them bring shoes so this sounded like a pretty gnarly training move.
The route on the return trip was not much different but we did only a fraction of the crawling through the kelp.  As we were coming out of the cove and making the turn towards Avila Beach the overcast turned into fog and the visibility became marginal, but this lasted for only a short time before the sun burned through.  I was the last one back to Avila having covered 5.34K (3.3 miles) in 1 hr. 55 min. I think the front group was 10 minutes ahead of me.  It was still flat and  glassy when I got out.  I didn't notice any variation in the water temperature during the entire swim, which was an unexpected bonus.

We will be back for our usual Sunday swim on the 7th.