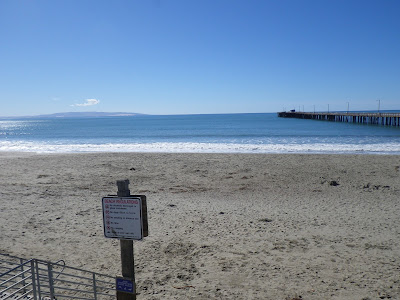 Avila Beach stepped up with another beautiful day to swim, offering clear skys, small surf, a building wind out of the SW and cold water temperatures. I measured 52 degrees in the suds from the pier. Out past the surf line it felt like 50 -51 based on how long it took my face to freeze up sufficiently to no longer feel the cold. 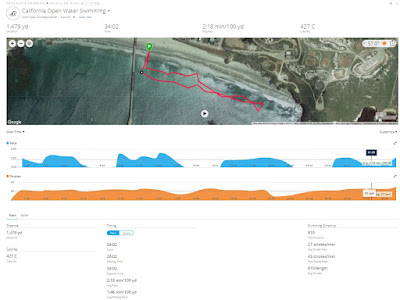 I was by myself and getting ready to get in when I noticed a woman putting on a swim cap. He name was Lindsey and she is a member of the Dolphin Club in San Francisco. We decided to swim parallel to the beach to Fossil Point and back. 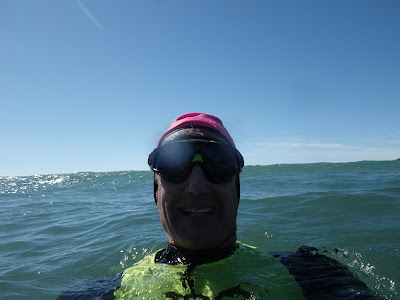 This is me where we began out return back to the pier. The water was nice and clean. The wind had come up enough to make a one foot ish breaking chop that made gave some character to the swim back. 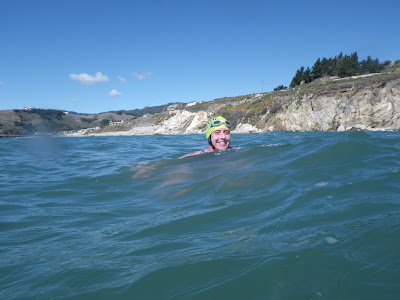 Jonny had arrived after we had gotten in and was trying to chase us down but we managed to swim past each other and never see each other in the chop.

There is no rain in the forecast in the next week so we should have warmer air and water next Sunday.

So I had decided not to go in the ocean. Sunday morning Morgan needed my car anyway. I looked into Sinsheimer (no open swims until 1:45pm) and Kennedy ($20 and they want you to book your time in advance. I'll pay $20 but I'm not booking my time in advance).

Niel had written a note saying he would be at Avila, and I didn't know if that meant he was swimming or not. I decided that it meant he was swimming around 10:40am, which was the same time as I was discovering there was no pool I could go to right then. And my head was all full of stuff and I needed the swim. So I went all Baywatch, jumped on the motorcycle, sped to the beach, ran down the beach in my wetsuit, and jumped in after the swimmer I could see headed for the cliffs in the shimmering distance. I've only ever seen the opening credits of Baywatch, but I think that's the general idea. It was choppy. The swimmer (I think) disappeared around the edge of the cliffs. Hunh. Niel was going long solo, and probably decided that there'd be less run-off in front of the cliffs. Smart. So I swam after him thinking I'd cut him off on his way back. Then I'm out in front of the cliffs and can't see anyone in any direction. Except that floating thing there. Is that Niel? Is it a seal? Is it something else? I'm swimming away from it. Should I wait? Just swim, relax, wiggle your fingers. Where is he? Did I miss him? How long do I stay out here panicking myself? Eventually I headed back to the beach, always stopping to look back at the cliffs. Niel's chair was empty on the beach but I felt like I had been out a while. Oh. There he is coming back from the showers. Nuts.

This is SF Dolphin, Lindzy. Thanks for a great swim Neil! It's always a pleasure to find other swimmers while traveling about the world. I am so glad you all have the website and blog!