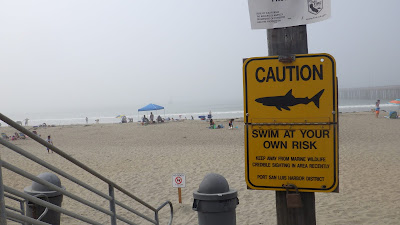 We had a complicated start to our swim today. Avila is rarely foggy but Sunday morning the soup was in and hanging along the beach. It would lift and then come back in giving no good sense when it might clear. Also, on Wednesday the Harbor Patrol had sighted an 8' white shark near the Cal Poly Pier so the caution signs were up. I find the advice on the sign amusing, the poorest swimmers in the ocean are supposed to manage to keep themselves away from some of the best swimmers in the ocean. It is good advice but I'm not sure how us meat puppets are supposed to accomplish it.
Anyway, no sharks had been sighted for 72 hours so the warning was being lifted as we got in. With the fog we decided to swim up and back along the buoy line because the next buoy in the line would be visible and if we lost even that it is easy to turn and follow the swell in to the beach.
Swimming today were Niel, Tom, Jim, Stephanie, Karen, Maria and Sue. Tom did his own swim on the east side of the buoy line, Niel, Karen, Stephanie and Maria did a lap of the buoy line and Jim and Sue did the buoy line plus an extra lap of east side. The water temperature was 58.5 and with no sun was feeling quite a bit colder than last week's sunny 62. 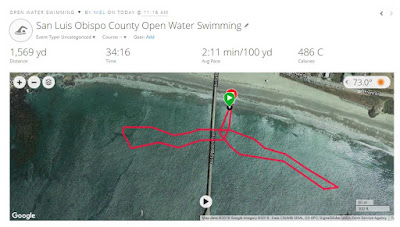 I managed to catch a lot of caps but few faces in this photo.
From the left that is Karen, Stephanie, a green cap, yellow cap, Sue and an orange cap.