Today's post and route map is by John Hampsey:

Avila Blog-- Sunday, August 19, 2018Gorgeous warm day... the fog clearing just as we gathered on the beach. We had some new swimmers today which made for a vibrant group and good camaraderie. Alice from Santa Cruz, Brandi, Kaori, John joined Heidi, Maria, Karen, Duke, Jonny, Jeff from New Zealand, and me. Now that most of the schools are back in session, the beach was less crowded and the water was clear and the warmest in a long time—65degrees! The swim route was to be to the first buoy, then past a sea-otter frolicking on its back, under the Avila Pier to the last buoy by the creek, then across to the Cal Poly Pier crosstie. From there, the plan was to swim to the end of the Cal Poly Pier and back across to the end of the Avila Pier. But a sailboat regatta was happening in the sea-reaches by the Cal Poly Pier, and Duke thought it more prudent to swim to the end of the pier and back and not mess with the boats. We broke into two groups at that point: the larger group headed to the end of the Cal Poly Pier and the smaller group (Jonny and me) decided to swim to the end of the Avila Pier. When the strap on my goggles freakishly broke, I was faced with the prospect of swimming all the way back close-eyed. But Jonny managed to repair my goggles using a piece of kelp and all was well. The distance for our swim was 1.3 miles, and the distance for the larger group was 1.7 miles.Back on the beach, we all gave our best wishes to Maria who is off to South Africa for the World Championship in the Half-Iron Woman. Congrats and good luck to Maria! 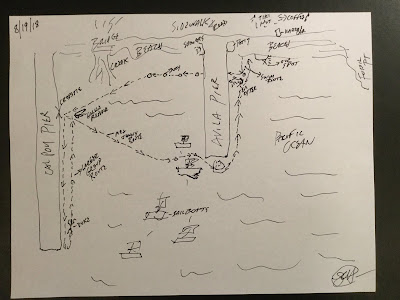 I was planning on swimming Wednesday and Friday evenings this week but life is intervening and cutting down on my recess time. :-(
The conditions looks to be nice so I hope that some of you make it to the beach.