Our First Evening Swim of the Year. 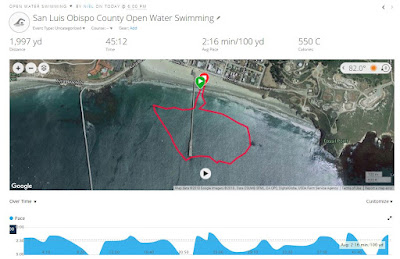 Heidi and I met at the beach at 5:30. It has been 85 degrees in San Luis Obispo so I was surprised how cool it was at Avila Beach. Fog was hangin over Pismo and Shell Beach and a SE wind was blowing it towards Avila. Avila was sunny when I arrived but I was glad to have my emergency fleece from the back of the Subaru because the breeze off of the fogbank was chilli. 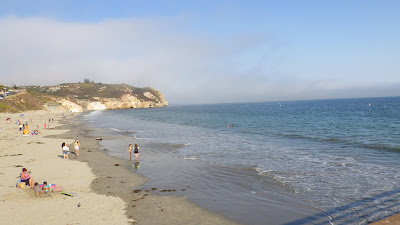 The east side of the Avila Pier with the fog beginning to wrap
around Fossil Point and into Avila Beach.

I measured a water temperature of 60 degrees. The surface conditions were a medium chop and no waves.  The wind was dropping so things became smoother as we swam.
We did a counterclockwise triangle and as we swam the fog closed in on Avila. 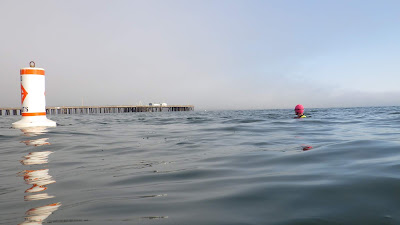 Heidi at the buoy near the creek mouth looking east
checking out the fog bank moving into Avila Beach. 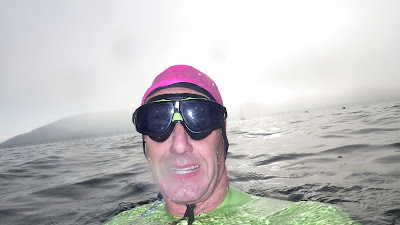 Niel at the end of the Avila Pier with the fog complete to the west of us.

From the end of the pier we could not see the buoys on the east side of the pier so we navigated by glimpses of the headlands and headed for where the last buoy should be.
We got a bit too far to the right (see the plot) but we did find the easternmost buoy. We could just see the next buoy in the line so we swam back to the pier one buoy at a time.
We covered a bit over a mile and had a great time.