Saturday morning had low rain clouds with a shower starting at 8 that lasted for 20 minutes. There was a offshore breeze blowing the tops off of the waves and 2 to 3 foot surf. The air and water temperatures were 50 degrees.  Niel, Sue and Theresa were going to swim. 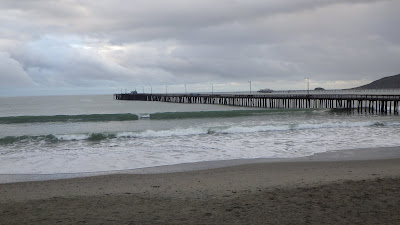 Theresa picked a route that was a square with a tail, or maybe a flag on a pole. The route turned out to be 3360M and gave us a shot at every kind of surface condition Avila had today.

There was an offshore, North, wind chop and current, a swell and push out of the SW and a lot of movement in the water. 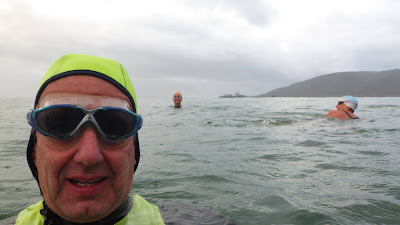 Niel, Theresa and Sue at the end of the Avila Pier for the first time. 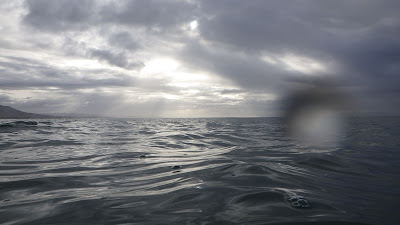 This is from the end of the Cal Poly Pier looking towards Pismo Beach.
Between the end of the Avila Pier and the creek mouth felt pretty flat but the chop was sneaking into my mouth no matter which side I breathed on.  The leg from the creek mouth to the second crossbars had nothing special about it.  Swimming out along the Cal Poly Pier was work, into a swell and noticeable current. That had me thinking that the last leg back to the Avila Pier would be easier. Nope, it was into the wind chop making this the hardest leg. I was feeling like I was going uphill both ways.
I saw Leslie getting ready to get in for a short swim as I was walking up the beach.
Duke and I will swim Sunday morning at 7:30. Sue and Theresa will probably join us.
niel