The water was cold today! The reading from the the usual spot on the pier was 51.5. Our unscientific conclusion was that the tsunami tides from Friday had stirred things up and had brought a lot of cold deep ocean water to the surface. Whatever the reason nobody was talking about going long today. Other than the temperature the water was pretty clean and flat, the tide was very low and there were some large sets of waves. The biggest waves had 6'+ faces and were in sets of 7 to 10, so getting out was going to be a matter of timing your dash between the sets. On the beach today we had Rob, Niel, Sylvia, Chad and Pete. Our getting out to the buoy line was a bit of a scattered endeavor. Pete got the jump on the rest of us by catching the first nice break in the big sets while the rest of use were admiring the view or trying to imaging what it was going to be like to get your face in the water since you already couldn't feel your feet. There rest of us did get going and we met up out past the buoy line, because I didn't stop swimming out until I thought that I was well beyond the breakers. With the very low tide there was still a lot of lift from the waves even out the end of the pier. We swam down the buoy line to the left to the phantom last buoy and turned to the end of the Avila Pier. There was somewhat of a plan to go from the end of the pier to the end of buoy line at the creek but as we approached the end of the pier water temperature took what we agreed was a 2 degree dive. At this point with the water temperature in the high 40's everyone liked the idea of heading in directly along the length of the Avila Pier. Pete got the prize for the biggest moment on the swim in when the three of us got to see a 6'+ wave pick him up and hang him on the crest of the lip for an instant before letting him slide down the back of the wave. I bet the view from up there made him forget about the water temperature. Sylvia had stayed along the buoy line and with no wetsuit, decided that 15 minutes in the water was enough.
We will be back next Sunday and hopefully the water temperature will have normalized. A increase of a few degrees would be welcome.
Wednesday Nights Swims Begin 3/16!
With the change to DST Rob and I are ready to start swimming on Wednesday evenings. We are going to swim this coming Wednesday at 5:30. That is in the water at 5:30. The start time will move to 6P once the days lengthen.
niel 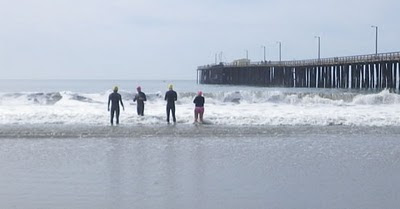 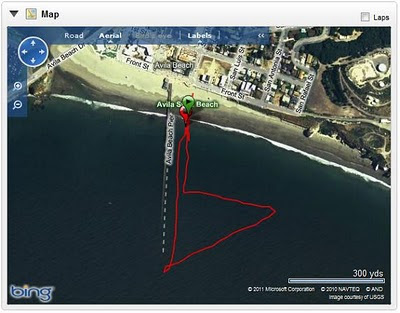