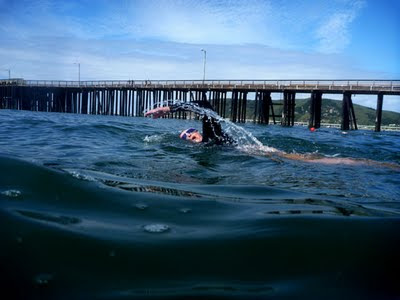 Today Avila was back to more normal conditions. It was crowded for Mother's Day, windy and the water was 54 degrees. The wind was out of the SW and was not steady. but when it kicked up it was really messing up the surface with a breaking chop. Sylvia, Yvonne and Rob had gone out early for a loop around the pier. They were just coming in when I went out to check the water temperature. When we met up on the beach they reported that it had been really rough off of the end of the pier and generally rougher swimming conditions on the west (windy) side of the pier. We took that in mind when we planned the 11 o'clock swim. Rob was going to go again with the three of us; Susan James, Niel and Ryan. We decided to start out along the east side of the pier and to swim to the end. then to swim to Fossil Point and then return to our starting point by swimming parallel to the beach along the buoy line. The leg towards Fossil Point would be with the wind and chop at our backs. The last leg would have the chop coming towards us at a 45 degree angle from the left but it should moderate as we came closet to the pier. Rob had said that it has felt colder than the 54 degrees that I had measured but we figured that the combination of the wind and the partial cloud cover would make it feel colder. Getting in it sure felt colder to me. We regrouped at the end of the pier and made sure that Susan and Ryan knew where we were headed to so no one would overshoot the point and wind up at Pirate's Cove. This leg was the longest and the most fun. A few times the chop would combine enough for me to get picked up and get a bit of a ride down a face. The leg back to the pier was just a slog. It was a matter of finding a rhythm that worked with the period of the chop that would allow you to keep a good stroke and not swallow to much water. We finished up and everyone felt like they had done a real ocean swim and accomplished something. The swim was 1.4 miles and took 40 minutes.
Rob, Ryan and I will be swimming Wednesday evening at 5:30 if anyone wants to join us.
niel 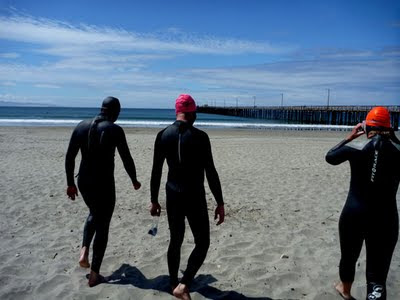 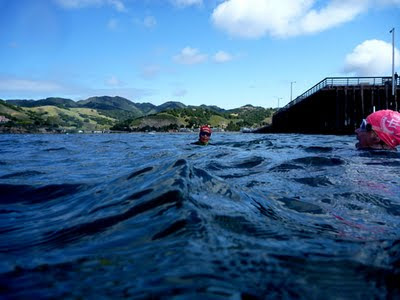